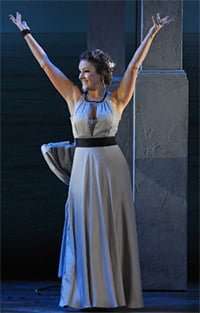 To open this year’s London Handel Festival is Imeneo, his penultimate opera and, like Serse (its immediate predecessor) it looks ahead to what might have been a new phase in his operatic development had he continued composing in this genre. Certainly it can be seen to anticipate Gluck’s reform operas with a tighter plot and generally shorter, defter and more dramatic numbers. Ironically perhaps, it is barely an opera at all; with its fairly static narrative it is more like a serenata exploring the dilemma of being in love – indeed it was put on as such by Handel in Dublin in 1742. Rosmene is forced to choose between gratitude (to Imeneo who has rescued her from pirates) and virtue (to Tirinto to whom she had earlier pledged her fidelity).

On account of its Classical provenance (Imeneo is Hymen, the god of marriage) and its relative small scale, its Grecian grace and charm call to mind Keats’s Ode on a Grecian Urn, particularly with Rosmene’s long drawn-out decision between her lovers echoing that poem’s theme of love almost fulfilled. The producers of this staging seem to have thought so too as the setting resembles that of a painting by Claude with a series of rounded arches (admittedly more Roman therefore than Greek, but a Classical idealisation nonetheless) framing a distant prospect of the deep, tranquil sea. The dark and murky outlook for much of the performance, however, made it appear more like the North Sea on a calm day than the Aegean. 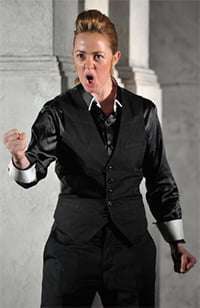 There was not much else that was subtle – for much of the first Act Imeneo, Rosmene and Clomiri (who is in love with Imeneo) were lumbering about in a state of some undress to sunbathe, and during her aria ‘V’è un infelice’ Clomiri was cavorting about the supine Imeneo to rub sun bloc into him, singing with emphasised raunchiness as she reached various parts of his anatomy. The routine was like something out of Club 18-30 on the Faliraki resort. There was also a fair amount of the already-passé fiddling around with mobile phones and iPods by the characters, which was merely distracting rather than providing any insights into the opera. In both of Argenio’s arias he was close to physically hectoring Tirinto and Rosmene respectively by squaring up to them with menace. Although certainly amusing and entertaining – and rightly so, as this opera is more comic than Handelian opera seria usually is – the choreography and production seems needlessly sensational and tawdry overall.

This is a shame as it dilutes the impact of Filipa Van Eck’s excellent and witty feigned-mad-scene (with some effective harpsichord figurations from Joseph McHardy) as Rosmene’s mental well-being comes under the stress of having to make her decision. There is no doubt that musically the focus is on, and Handel’s sympathy with, Rosmene and by composing the final chorus unsettlingly in the minor key Handel suggests that the apparent resolution of the drama with Rosmene’s choice of Imeneo is no straightforward or final undertaking psychologically. A neat dramatic touch did coincide with Handel’s intentions here: although Imeneo and Rosmene, and Tirinto and Clomiri are paired off as lovers at the end, as they line up with their backs to the audience we see their hands reach out and clasp the hands of the other lover instead, leaving no doubt that this is by no means the end of the matter.

Morgan Pearse was an authoritative Imeneo, very much a macho, swaggering figure. In contrast Annie Frederiksson characterised Tirinto as a far more reflective and thoughtful personality: in ‘Pieno il core’ she reached a climax of Mozartean intensity and passion, and elsewhere she brought out Tirinto’s frustrations movingly and effectively. There was fire and spirit in Filipa Van Eck’s account of Rosmene, and something almost of the soubrette in Clomiri as realised by Louise Alder. Timothy Nelson as Argenio lacked sufficient interest in the music and the long sinewy and chromatic lines of ‘Di cieca notte allor’ (which presage those of ‘The people that walked in darkness’ from Messiah) sounded somewhat one-dimensional and interminable. Laurence Cummings kept the music moving at a fair pace. Sometimes it even seemed a little hard-driven, for instance in Tirinto’s opening full aria ‘Se potessero’ (which is reworked from the rapt thematic material of ‘O Lord, whose mercies numberless’ in Saul) but equally this ensured that tension and concentration rarely flagged, even in the da capo arias.

The score being performed is Handel’s revision of 1740 (Imeneo taken by a baritone rather than a tenor for instance). In general, ardent Handelians will no doubt enjoy the opportunity to see this work staged (Christopher Hogwood and the Academy of Ancient Music are bringing a concert performance to the Barbican Centre on 29 May) but this production is unlikely to convert those not already enamoured of Handel’s stage-works.