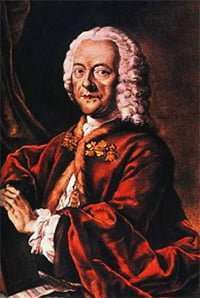 Georg Philipp Telemann (1681-1767) was a more widely known composer in his day than even his contemporaries J. S. Bach, Handel and Vivaldi and yet much of his vast output fell into neglect soon after his death. The operas have been particular victims of this silence, not least Orpheus (or ‘The Marvellous Constancy of Love’ to give it its subtitle). Composed in 1726 for performance in Hamburg’s Opernhaus am Gänsemarkt, it was lost for over two centuries until the original manuscript was discovered in the 1970s. Classical Opera presented it here based on a production first seen at the 1994 Innsbruck Festival. An interesting facet of the work is that the text is trilingual. It is predominantly in German, but there are interpolations in Italian and French. This may seem strange but it was normal practice in Hamburg, as it can also be found in the operas of Reinhard Keiser and in Handel’s first opera, Almira, produced for Hamburg in 1704.

The story is the same as that known from various treatments of the Orpheus myth. This version though adds the character of Orasia, the widowed Queen of Thrace, whose love for Orpheus is unrequited. Out of jealousy she engineers the circumstances that will lead to the snakes fatally biting Eurydice. The drama adapts the account of Orpheus’s violent death at the hands of a frenzied, drunken group of priestesses of Bacchus, by having Orasia incite them to this murderous act too. Ultimately the tragedy is as much about Orasia as it is about Orpheus, as we see her torn apart by her conflicting feelings for Orpheus. At the end she repents of what she has done and finds the resolution of her emotional torments in death. The theme of constancy is not only witnessed in Orpheus’s love for Eurydice, but also in Eurimedes’s abiding friendship with Orpheus, which continues even when he is rebuffed by the anguished Orpheus after returning from Hades.

Orasia must have represented to 18th-century audiences roughly what the Queen of the Night signifies to subsequent generations of opera-goers. Eleanor Dennis gave a performance that was powerful, magnificent and terrifying; she gave all the signs that Orasia is only to be crossed at one’s peril. Not the least part of her achievement was her secure handling of the virtuoso lines and the stratospheric notes which Telemann calls for at the most dramatic moments. Possibly her singing was a little too overbearing though: there was little variety in tone in her three consecutive arias at the beginning of the opera, as she moves from sighing bewilderment to her evil resolve to avenge herself. Any sign of vulnerability or passivity only came in during the final scene as Orasia realises what she has done – although Dennis did not need to alter very much, a slight hint of Orasia’s humanity would have been desirable earlier on to make for a more fully rounded character. 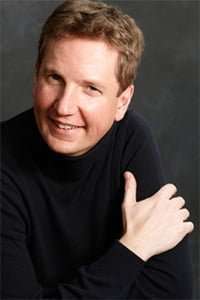 To some extent the singers in the other main roles of Orpheus, Eurydice and Ismene had a tendency to declaim their parts too, which made the performance musically rather unyielding and perhaps a little too much like a concert performance, rather than exploring the gradations of their respective characters. Jonathan McGovern as Orpheus however certainly showed some wit, even irony, in some numbers such as his duet with Eurydice in Act One. There was a welcome moment of quietness in his aria ‘Ach Tod’, married to a mood of intensity, as he longs for death after Eurydice has been bitten – the aria is simply accompanied by pizzicato strings (without harpsichord) to create a hushed, expectant atmosphere, and ends inconclusively. When she appears in Hades, Rhian Lois as Eurydice sang with a joyful, innocent simplicity that showed her as very much the opposite of Orasia in personality.

Alex Ashworth delivered the part of Pluto in Act Two from the pulpit, as though that were his throne. He gave to the role an implacable, indomitable majesty that was more sympathetically and subtly realised than some of the other roles. Rupert Enticknap, as his assistant Ascalax, sang with a vigour and brightness that marked his voice as genuinely that of a countertenor rather than a male alto. But ideally the recitative in which he warns Orpheus not to look back to Eurydice while leading her out of Hades could have been more urgent and pregnant, as that moment is the whole crux of the drama. The comic little subplot that follows Eurimedes’s unsuccessful attempt to woo Cephisa was realised by Alexander Sprague and Susanna Hurrell respectively with an amusing light-heartedness that contrasted well with the more serious romantic entanglements.

Telemann’s Orpheus might not be as consistently rewarding as the operas by Handel or Rameau but there are still enough gems in it to have made it a worthwhile enterprise to put on this performance. Notable also was the sequence opening Act Two as Orpheus descends to Hades, first with an instrumental prelude whose ghostly little mordents were like the shivering figures evoking the Cold Genius in Purcell’s King Arthur, followed by the mysterious, spare music often played pizzicato. There was also the charming aria ‘Augelletti, che cantate’ – in which Georgia Browne must be commended for her fluttering bird-like solos on the flute – even if the music is not as memorable as Handel’s in the aria of the same name in Rinaldo or ‘Sweet bird’ in L’Allegro. There is no doubt either that Telemann had an uncanny ability to shift effortlessly in style between the vocal lyricism of many of the Italianate arias, and the more flamboyant trills and dotted rhythms of some of the numbers in French. Ian Page and his players and choristers engaged with all this perfectly – their performance pulsed with life, coming to the fore in the instrumental interludes, but receding enough to allow the singers the limelight in the arias, without becoming mere accompaniment.