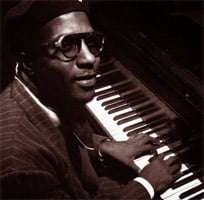 As Jazz acquires an ever-lengthening history, it makes sense for an event such as the London Jazz Festival to focus on the music of the genre’s major figures. Thus the last day of this year’s festival presented the complete works of Thelonious Monk (1917-1982) – a composer who, though he may be risk being overshadowed by certain of his younger contemporaries, is rivalled by few in terms of the range and adaptability of his work. Someone once said that if you arranged Bach for cement mixer, the musical substance would still survive intact, and the same holds true of Monk – for all that the performances heard here were notably respectful, if rarely cautious, in their handling of his legacy.

The programme itself was a hectic one – such as might have been easier to assimilate had it begun at, say, midday rather than 4 p.m., so allowing precious little time between one session and the next.

And though a full set-list was made available at the start of proceedings, the tendency to rearrange the order of numbers made it difficult for all but Monk devotees to keep tabs on what was being heard – a factor that caught out some of the musicians on one or two occasions! Even so, all 70 of Monk’s original compositions were heard during the three-concert, six-hour course, while the line-up of musicians assembled under the Monk Liberation Front could have not have been better chosen to capture the spirit which comes through the varied output of this most resilient of jazz composers.

Session One began with a set from the Tony Kofi Quartet, whose fluid saxophone manner was much in evidence – too much so at times, as Ben Hazleton’s invigorating bass work sometimes ‘got lost in the mix’. Yet such as ‘Light Blue’ and ‘Sixteen’ emerged new-minted, with Jonathan Gee dispatching Monk’s piano parts with aplomb and Winston Clifford keeping the beat with suitably deft precision. A Duos set then enabled these players to stretch out in various relaxed dialogues, before the Corey Mwamba Band saw the eponymous vibes player cut lose on such tracks as ‘Bemsha Swing’ and ‘Eronel’.

Session Two opened with a selection from the Quentin Collins Quintet, the trumpeter who came into his own with imperious renditions of such numbers as ‘Monk’s Mood’ and ‘Criss Cross’. A line-up simply billed as The Trio then took the floor with a lighter (though not therefore easier!) selection including such seasonal items as ‘Stuffy Turkey’, before Cleveland Watkiss offered an enticing range of duos. Covering all the bases from song, via scat, to improvisation, his interpretation of such as ‘In Walked Bud’ and ‘Bright Mississippi’ certainly numbered among the highlights of the evening.

Session Three commenced with the Cleveland Watkiss Group in a (too?) substantial set, of which the mesmeric ‘Shuffle Boil’ and soulful ‘Pannonica’ were undoubted highlights. Corey Mwamba returned for a brief but blistering workout, including the dryly-humorous ‘Locomotive’, before Quentin Collins and Ben Hazleton breezed through a varied sequence entitled ‘Blues’. The Toni Kofi Quartet reappeared for another well-contrasted set whose centrepiece was ‘Round Midnight’ – surely Monk’s most famous composition, here made sultry and sensuous by turns. Finally, The Monk Liberation Front assembled all of the performers for a final sequence of ensemble workouts – concluding with ‘Children’s Song’, whose engaging whimsy provided the perfect means to round off an event of truly Wagnerian length.

Attendance for the first two sessions was consistently high, but tailed away noticeably for the third session – a pity, as this demonstrated probably the widest range of compositional and performance styles. Yet any such logistical failing cannot be blamed on the musicians – whose commitment and sheer dedication never let up for a moment. Monk aficionados will have lapped it up: those intrigued by his music will still have been grateful for this 90th-birthday opportunity to take it all in at one go.