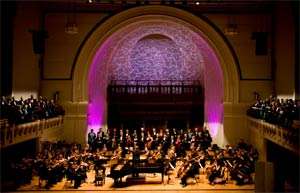 This was London Lyric Opera’s third event since its launch (with “The Flying Dutchman”) in November last year, and was probably its most testing challenge so far, with mixed results. “Die Fledermaus” depends for its sparkle as much on the music as on the spoken repartee, and the latter, tripping lightly through the plot’s intricacies and lunacies, should at least be audible. This was not always the case here, Charne Rochford’s Eisenstein and Lise Christensen’s Orlovsky being particular casualties. This also showed up the wisdom of taking-on this most famously danceable and tactile operetta in a concert performance, with its specific evocation of the visual as well as musical spirit of decadent, sentimental Vienna, and the awkward semi-staging (a few masks, a costume change and a vaguely psychedelic back projection) couldn’t help but make the comic/romantic interaction clumsy and for the most part unconvincing.

The singers who compensated best with these built-in difficulties were Ana James as Adele and Sarah Redgwick as Rosalinda. Ana James, a lovely Susanna in Royal Opera’s “The Marriage of Figaro”, was just as charming and vivacious as the maid, with a nicely judged sense of mischief that made her sly, chuckling ‘Mein Herr Marquis’ one of the best things of the evening. Sarah Redgwick’s warm lyric soprano had the poise, good taste and understated humour of the role; her looks were a bit too English and wholesome for her to be entirely convincing as the mysterious Hungarian countess, but when she sang it was another matter, with the ‘czardas’ agreeably insinuating and instinctive. While Lise Christensen mumbled her way through the dialogue and could have camped up ‘Ich lade gern’ a lot more, she was a gamely androgynous, anything-goes Orlovsky.

Charne Rochford’s baritonal tenor suited Eisenstein well, but it was a rather bland performance. Garrie Davislim was the attractively sung and personable Alfred, and he managed to convey that slight disdain of an opera tenor slumming it in operetta. Simon Thorpe blustered his way through Falke, and Jeffrey Black was a marvellously assertive and funny Frank, with a very odd and varying accent, Wales via Sydney it sounded like. Nicky Spence gave a lively, very well sung caricature of Dr Blind the lawyer. Frosch was played by the actor Bernard Horsfall, the role powerfully delivered, as you’d expect, and sensibly short.

The mystery guest was not a star singer but a star pianist, Leslie Howard, who continued the Hungarian tendency with a performance with the Royal Philharmonic Orchestra of Liszt’s Hungarian Fantasy, very much in the heavily melancholic ‘rhapsody’ style and thrillingly played by this great Liszt virtuoso. It sat rather oddly within the context of champagne and decadence, but who cares? It’s a terrific piece.

Madeline Lovell, who was highly praised for her “Fidelio” with LLO earlier this year, conducted superbly, with her fresh, springy and spontaneous approach to the Overture energising the whole evening with an instinctively light Viennese lilt that was very engaging.