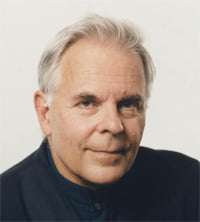 The music is in Stephen Kovacevich’s care. He conducts through his hands – eloquently. His concern is not with beating time, bar by bar, but with expressing the music phrase by phrase and through instrumental colouring. His hands affirm the broad beat, the character of the music about to come, the instruments that will play it – and the manner in which he expects the next few bars, the next phrases to be played. It is all solidly under control, unproblematic – and reassuring for a body of fine musicians to follow. Indeed, the London Mozart Players acclaim for Kovacevich at the end of the concert testifies to the warm rapport these musicians felt for one of their fellows.

This is a chamber orchestra, comprising 14 violins in all, 4 violas, 4 cellos and 2 double basses as well as pairs of woodwinds. Cadogan is a moderate-sized, high-ceilinged concert hall. Its acoustics are clean and clear – responsive to changes in quality of sound. In quieter passages there was admirable balance and clarity between the strings and the winds. Counterpoint was clearly demarcated and gave considerable delight. The hall responded resonantly to loud climaxes, so that greater volume – a much-recurring feature in Beethoven’s music – had more force and volume than anticipated, given the size of the orchestra, while retaining clarity of texture. There was, particularly during the Overture, beginning the latest instalment of the LMP/Kovacevich Beethoven cycle, some dryness among the violins in louder passages at higher pitches but the opening work also had weight and presence in its imposing introduction and a light, fleet, pressing forward in the allegro.

The C minor Piano Concerto was satisfactory, coming over as rather demure, though ultimately quite satisfying. Throughout the concert, Kovacevich’s chief concern was to give beguiling performances. The speeds were lively without being hair-raising; they were gentler than the metronome markings allow for – and more humane as a consequence. Throughout one had the sense of musicians engaged in making music, rather than virtuosos displaying their skills, stretched unnaturally. This was a straightforward concerto-performance. It stepped over some of the difficulties; it had no pretensions to depth or darker moments. It set out to engage – and succeeded.

The ‘Pastoral’ was much the same – appropriately enough, it being Beethoven’s most genial larger orchestral work. The orchestral care was present, though – make no mistake about that. The opening movement was quite fast. This was no walking speed. Beethoven sang as he strode on his country walk. It was an intriguing notion, successful in execution. The ‘Scene by the Brook’ gurgled deliciously. Its counterpoint was of extraordinary limpidity. In particular, flutes and bassoons did themselves proud – though the genial, mellow horns spoke warmly, too. The country dancing was a little stiff, but the storm had powerful impact. Beethoven’s descriptive writing came over vividly. The ‘Thanksgiving’ was gentle and heartfelt.