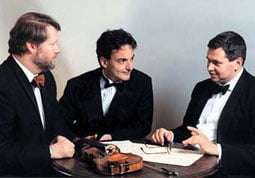 More people need to discover this venue and its excellent music-making. Easily accessible from Highgate tube station, it is a café-cum-intimate-chamber-music venue, usually offering, as here, substantial programmes and excellent players. One can get close with the performers that it is even possible to see the strings of the instruments vibrating and to read the players’ music! It was a delight to hear Colin Stone rehearsing some Beethoven for fifteen minutes before the recital got underway.

Each piece on the programme was introduced by one of the players. Schubert’s Notturno began smoothly, almost wallowing, before some very plucky pizzicatos lightened the mood. It is too easy for the piano in such a setting as this to be overpowering, but here Stone’s playing was well-judged. This Adagio served as a sombre mood generator for Shostakovich’s Trio; it was also at this point that Stone asked for a volunteer to page turn for him, as his assistant had not appeared.

Piano Trio No.2 was dedicated by Shostakovich to his close friend Ivan Sollertinsky who died in 1944; we were also reminded in the brief introduction of the associations of the piece as a memorial to the victims of the Holocaust. Indeed, one can hear the same Jewish melody used in his String Quartet No.8, associated with the crime at Majdanek. The crying notes from the cello that begin the piece were aching and the entry of the piano only reinforced this. Elsewhere in this Andante the cello was full-bodied, the violin-playing defiant. Indeed, Leonid Gorokhov carried the work. He gave an electrifying account in the Allegretto where, forceful and restless, he was able to carve his own course through the music. With soaring passage work from Krzysztof Smietana in the opening movement and ably accompanied by Stone (who seemed to play the piece in a supporting capacity throughout), Gorokhov became plaintive in the Largo, as though lamenting life itself.

Written by a 19-year-old Rachmaninov, the Trio Elégiaque was hailed by Tchaikovsky. It is a single-movement work that displays a constantly-evolving spirit with plenty of colours for the piano to explore. The piece opens Lento lugubre with some sweeping textures and overpowering climaxes. The piano’s modest solo passages were evocative of loneliness and the pummelling climax followed by the deep piano close was very Russian.

Mendelssohn’s D minor Trio is at times dramatic and always full of life, but somehow fails to find anything deeper, even in the slow movement. Here, the first movement was at times jolly and intense, with the character coming from the violin and cello. The scherzo was lively but too light whereas the finale, with its rush of notes, was a like a thrill-ride from the piano. Again, Gorokhov’s cello was a constant joy to hear.