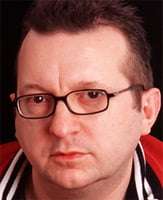 The third of the London Philharmonic’s current concerts to include a work by Mark-Anthony Turnage brought us the London première of what is effectively a concerto for his old friend, Michael Collins. The work received its UK premiere with The Hallé under Mark Elder in 2005. Turnage and Collins attended the Royal College of Music when they were in their teens. Given that they have been friends for nearly 30 years perhaps the concerto was a little overdue. It was quite the best thing about this concert.

Far from opening a door on the future, Beethoven’s First Symphony was a strangely old-fashioned affair. Given with a nearly full complement of strings seated traditionally with all the violins to the conductor’s left and cellos and basses to the right, this was a resolutely earthbound performance. With its thickish textures, the music never really took wing and Alsop failed to make much of its dynamic contrasts. It was a reading which made some of the right gestures – such as the inclusion of the first-movement repeat – but more often it was dutiful rather than inspired: the Andante cantabile con moto was too slow to have any lilt and was not helped by Alsop’s irritatingly pedantic insistence on sub-dividing the beat. With every I dotted and every T crossed, the movement seemed interminable and much the same went for the finale, which chugged rather than sped along.

Far more enjoyable was Riffs and Refrains, scored for a large orchestra including triple woodwind as well as a prominent part for soprano saxophone, almost a Turnage signature. The work is in two parts; ‘Riffs’ is basically fast and light, the clarinet part full of acrobatic leaps and sudden shifts interspersed with beautiful extended phrases, and ‘Refrains’ an extended arioso meditation rising to an impassioned climax before tailing off with a series of icy string chords. Transpose the slow movement of Gerald Finzi’s Clarinet Concerto forward by the better part of a century and you will have an idea of the effect of this hauntingly elegiac movement.

Michael Collins’s performance of the work was everything the composer (who was present) could have hoped for: dynamic, soulful and – where necessary – characteristically flamboyant. Boosey & Hawkes, the work’s publisher, had obligingly provided a full score; with this to hand, it seemed clear that ‘Riffs’, with its many volatile switches of tempo and its occasional heavy scoring, would have benefited from a crisper, lighter touch in the orchestral part. It is music that will repay further hearings.

Elgar’s First Symphony was a disappointment. Since the days of Boult, the London Philharmonic has made a speciality of this work. I myself sat in on Solti’s rehearsals and since then have heard excellent performances from the orchestra with Barenboim and Zubin Mehta, the latter a much-underrated Elgarian. Alsop’s one-dimensional account was not in this company.

Much of the first movement’s sweep and tension lies in its juxtaposition of 4/4 and 6/4; with Alsop, whenever we passed to 6/4 the music sagged and lost its underlying momentum. The second movement Allegro molto was taken fractionally too fast to allow for this unusual combination of scherzo and march to work up any real weight or ferocity, whilst the linked Adagio – whose miraculous opening is marked pp cantabile – reached a throbbing mf in the second bar, dissipating any sense of restraint or wonder. This was emotionally incontinent Elgar, shorn of half-lights or sepia tones, which reduced the movement to salon music. Far from expressing massive hope for the future, the finale’s closing peroration was just that, so much empty posturing rather than the lid finally coming off a pressure-cooker with the inevitable release of carefully built-up tensions.

There are many fine non-British Elgarians – Leonard Slatkin, Mehta and Gennadi Rozhdestvensky conspicuous amongst them. Sadly, on the evidence of this concert, Marin Alsop is not one of their number.