When the London Phil announced its year-long Stravinsky series I promised myself Threni, elusive in appearances and, at least to me, and years ago, doubtful of its musical attraction. In this final leg tracing the composer’s “Changing Faces”, Vladimir Jurowski has persuaded me otherwise, that this 1958 work written for Venice – scored extravagantly for six solo singers, chorus and a diverse orchestra including sarrusophone and flugelhorn – is rather remarkable if perhaps best experienced occasionally, but at least it is now parked in my consciousness, certainly in terms of sound and shape. 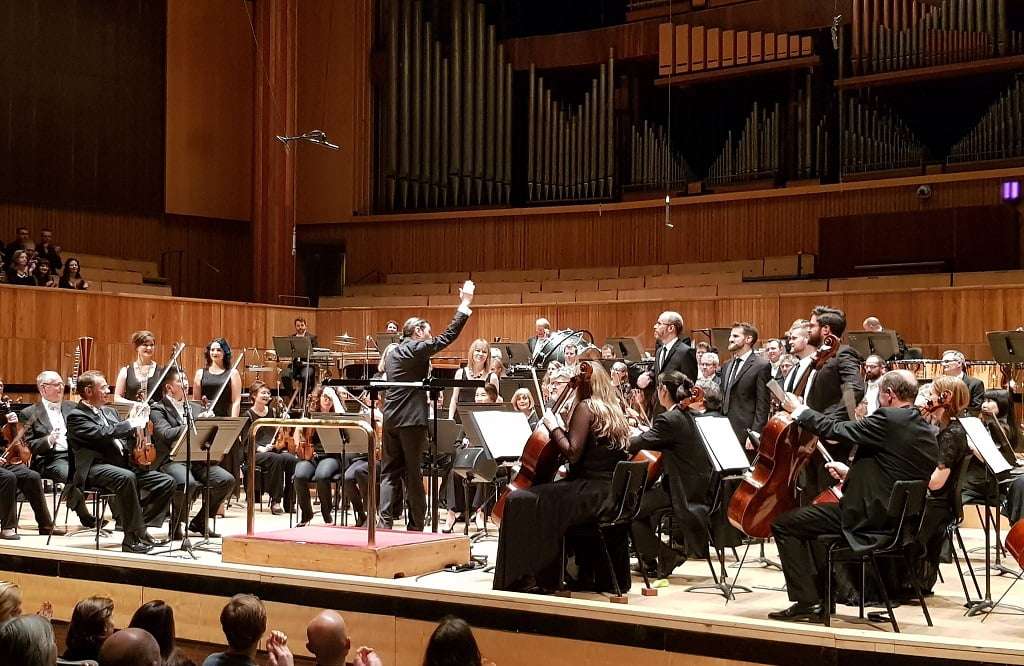 The selections from the Book of Lamentations as set by Stravinsky emerged as unclassifiable – from Baroque to Modern via any other genre you can nominate will not do, nor is it a bit of everything. In ambience, descriptions such as severe, austere and solemn might give a clue, ritualistic too, yet they also prompt a nagging misgiving as to what best describes music that chants and orates or delights in locating one of the tenors (declaiming as if from a pulpit) with the flugelhorn. Best, I think, to suggest the timeless universality of plainsong as the invention’s roots if harmonically far more complex and exposed – some members of the platform-positioned London Philharmonic Choir took to tuning forks to ensure accurate pitches – and these antiphonally placed choral members again worked wonders of meticulousness, blend and linguistic familiarity; so too the soloists, also placed behind the orchestra without compromising communication, Joshua Bloom especially imposing. In music that for the most part is slow-moving – and may consciously if briefly recall Symphony of Psalms and the rhythmic slant if not the wedding ceremony of Les noces (the latter reminiscence fuelled with crisp timpani yet ominous gong-strokes) – the (here) thirty minutes passed by quickly, further evidence that the seemingly black-and-white Threni is also inscrutable.

Jurowski knew his way through it, vocalists and players assured, fitting well into a concert that remembered the bass Maxim Mikhailov (born 1962) who died on November 21 “physically attacked on a Moscow street” and who was booked for Threni. He sang with the LPO only recently, in Requiem Canticles (link below).

The concert opened with the Variations (completed in 1964) that Stravinsky had already started when he heard news that his friend Aldous Huxley, the author of Brave New World, had died on the same day in 1963 as President John F. Kennedy was assassinated. For music of such brief sections (totalling six minutes, roughly) and economy, the orchestra used is quite large – from three flutes to three trombones, with piano and harp if no percussion. Boulez has a point that in this work Stravinsky didn’t add anything that Webern hadn’t already essayed, although the string-writing leans more to the already-aired experimental Penderecki; yet it’s fascinating to hear a composer not writing a superfluous note, and knowing when to stop and move to the next observation, the last word of Variations given to an interjecting and fading bass clarinet.

Tango (1940, for piano) has previously graced this series, twice, from Peter Donohoe as an encore (following Capriccio), and, as orchestrated by the composer, from Jurowski. Here it was an anonymous a cappella arrangement (beyond Stravinsky), the current members of The Swingles, microphones in hands, introducing themselves with consummate skill and also mimicking bass and cymbals, before taking part in Luciano Berio’s Sinfonia (1968, dedicated to Leonard Bernstein), in which Stravinsky’s Rite of Spring makes a guest appearance, alongside quotations from Bach, Beethoven, Berlioz, Debussy, Hindemith, Ravel, Richard Strauss, and others, ground-planned and name-shared by the corresponding third-movement (In ruhig fliessender Bewegung) of Mahler’s ‘Resurrection’ Symphony: quite a musical cocktail, of seamless brilliance from maestro Berio, but then Sinfonia is a contemporary classic (if also of its time in movement II, ‘O King’, for Martin Luther King) and gets out quite a bit despite its rehearsal, logistical and budgetary demands.

Jurowski and the LPO did Sinfonia proud, although for all the good balance between The Swingles and the Orchestra – the tonmeister not named – the vocalise and talking came more from the ceiling-hanging speakers rather than the stage positions occupied by those exclaiming, in a semi-circle embedded behind the first desks of strings – violins, violas, violins (again), cellos. Naturally enough it’s the Mahler-founded central tableau that holds sway, Mahler’s design and music overlaid with much Berio decoration, ebbed and flowed with those borrowings and reaching seismic climaxes, diminishing to what might be described as Berio’s ‘Urlicht’, although he simply terms it “IV”. The final movement, added the year following the first performance, fast-forwards and looks-back and found The Swingles purring.

It was enough but there was more, first what I believe was Piazzolla’s Libertango, again Swingled, then Jurowski made a speech of thanks to the performers throughout the year, and to the “core audience” present – as he said, put Firebird on and you get a full house, play something esoteric, you don’t. Hopefully such box-office disappointment won’t dent the LPO’s spirit of adventure. Finally, Jurowski conducted Circus Polka, a tricky number, not always disguised by the LPO, just occasionally this baby elephant was dancing on ice, but when Stravinsky calls upon a loan from Schubert the music military-marched home with celebratory exhilaration.

The LPO programme advised that Radio 3 recorded this concert for broadcast on December 12 at 7.30 p.m., but the BBC website begs to differ (offering something Handelian instead) – LPO microphones were present though and not just the ones coveted by The Swingles.

UPDATE: No broadcast on December 12 – “We were unable to record the LPO’s concert in the end for technical reasons…” [BBC Radio 3].