For the second of this week’s London Philharmonic concerts Vladimir Jurowski’s orchestral manoeuvres continued. For the main two works this involved the unconventional seating of the violas to the conductor’s left behind the first violins and the cellos to the right behind the second violins, with the double basses on risers to the right. Trombones and tuba were positioned, German style, centred at the back and the horns to the extreme left. The results were highly satisfactory, resulting in an agreeable weight and clarity to the string parts and with the brass better embedded in the overall orchestral texture.

The evening opened with the London première of Mark-Anthony Turnage’s Lullaby for Hans, an 80th-birthday hommage to his friend and one of his mentors, Hans Werner Henze. A short work for strings, it is a reworking of a piano piece, and the composer (who was present) says that it recalls “wonderful days spent in his company over the many years I have known him”. Its placid lullaby is interrupted at two points by brief eruptions. This agreeable opener was twinned with Henze’s own Seconda Sonata per archi, a three-movement work lasting less than ten minutes inspired by the strings of the Leipzig Gewandhaus Orchestra. Both works were finely played, especially the solo violin and solo cello passages – Boris Garlitsky and Susanne Beer respectively – with which the Turnage closes and the divided cellos in the central movement of the Henze.

Surprisingly, given Christian Tetzlaff’s general stylistic surefootedness in a wide variety of music, Brahms’s Violin Concerto was the least satisfactory part of the concert. Jurowski’s marmoreal way with the opening orchestral tutti certainly did not help matters. It wasn’t so much that it was slow – it was – but that, in putting each phrase under the microscope, it failed to flow. Tetzlaff’s first entry sounded more febrile than heroic as though he were striving for a grandeur which did not come naturally to him and the actual quality of his sound was, at least initially, forced and ungrateful. As the movement progressed things improved considerably and led to a fine cadenza (Joachim’s) and a sublime coda.

By contrast with the opening movement, the Adagio was taken quite flowingly, and was graced by a subtle introductory oboe solo. Unusually, Tetzlaff found a restless almost volatile quality to this movement quite different from the poise most interpreters bring to it. Disaster struck at the opening of the finale with the soloist breaking a string in the first bar; Tetzlaff departed to re-string. This had an unsettling effect and upon resumption there was an almost hectic over-forcefulness, almost smiling through gritted teeth, as though everyone were determined to get to the end in one piece. 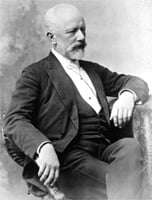 Tchaikovsky’s ‘Pathétique’ Symphony was the very last work (encore aside) that the London Philharmonic and Jurowski played in the Royal Festival Hall before its closure for renovation (and they include it again next season, on 26 November). Jurowski conducted from memory, greatly to the work’s benefit given the conductor’s detailed grasp of every nook and cranny of the score. The ‘Pathétique’ from Muti and the Chicago Symphony Orchestra that recently graced the RFH was a hard act to follow. This LPO account was only a little less good in terms of execution but in some ways even more satisfying musically. In both the opening movement – with its difficult-to-bring-off structure – and in the slow finale, Jurowski succeeded in the demanding balancing act of giving full value to each successive section whilst holding sufficient in reserve to clinch the real climaxes.

The first movement was slow-burn Tchaikovsky, allowing tensions to build naturally and with a clarinet solo of quite extraordinary finesse from Nicholas Carpenter prior to the ff thunderclap; thereafter the movement took wing in a way one seldom hears, overwhelming emotion perfectly balanced with precision. The elegantly turned 5/4 ‘Waltz’ second movement provided brief respite. The succeeding ‘March’, taken swiftly and with an almost balletic lightness built to a quite visceral climax with – most unusually – absolutely no holding back of tempo at the close and even a reserve of power held for the final fff