After a recent New York concert by the Pittsburgh Symphony pairing Brahms’s Violin Concerto with Mahler’s First Symphony, here was yet another evening of a violin concerto and symphony in D major.

Although the LPO’s program was a conventional one, both soloist and conductor seemed very interested in stripping away layers of tradition. The tempos in the Beethoven were brisk, textures lean and there was ample attention to detail. Thomas Zehetmair clearly had given a great deal of thought to every phrase, every nuance, at times to the point of over-inflection. His tone ranged from a mere whisper at the end of the second movement to a slightly forced fortissimo at the big moments, with many different shades and colors in between.

Instead of the usual Kreisler or Joachim cadenzas, he opted for Wolfgang Schneiderhahn’s adaptations of the four Beethoven wrote for his arrangement of this concerto for piano and orchestra. Rich in double-stops and scale passages, the one in the first movement sounds surprisingly modern, incorporating timpani (as does the one for this work by Alfred Schnittke), and featuring a sort of country-dance in the middle. The re-entry of the orchestra at the end of it usually is one of the most sublime moments of the movement, but here the seams showed. It was too abrupt a transition, especially since the tempo, perhaps a nod to tradition, was dramatically slower to accommodate a stretto at the end. 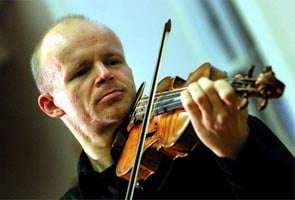 Zehetmair is a very physical player, but the overall impression was that of a well-thought through, intelligent performance, rather than a heartfelt one. Vladimir Jurowski and the LPO were finely attuned throughout, playing with the involvement and refinement of a large chamber ensemble. As an encore, Zehetmair offered Heinz Holliger’s Souvenir of Newcastle, written in November last year.

Avery Fisher Hall is often maligned for its acoustics, but the LPO found a seating plan which negated any inherent problems. Rather than spreading out across the stage, the strings were sitting closely together in the order of first violins, violas, cellos, with second violins on the right. Woodwind and brass were on sets of risers, the double basses against the back wall on the right, behind the low brass and timpani.

Especially in the Brahms this arrangement produced a rich string tone, but also allowed the woodwind and horn solos to be heard clearly. Jurowski has a fine ear for color and balances, and he connects with the sound in way one rarely encounters. Instead of indicating every beat, he conducts phrases. One gesture may set into motion several events, like generating a wave which will find its way down the river, but always shaped in the process with unobtrusive, yet undeniable control. This approach only works with a very responsive orchestra, and the LPO more than lived up the conductor’s demands.

Conducted in one beat to the bar for the most part, the first movement, with the exposition repeat taken, may have been faster than Brahms’s Allegro non troppo marking, yet it didn’t feel rushed. Only during the coda, after John Ryan’s beautiful horn solo could one wish for more expansiveness in the tranquillo section, for the traditional Brahmsian grandeur one is used to hearing here. Jurowski’s fast tempos for the whole symphony may shed a different light on the piece, but in the second movement he sacrificed the proper character of an Adagio. It was pleasant, lively, and even dramatic; however, one missed any sense of nostalgia or mystery, the qualities which create contrast to the other movements. In the again-taken-swiftly third movement, the grace-notes at the end of the bars were completely swallowed up, although otherwise the woodwind shone in a virtuoso display. It sparkled, but again one wonders whether this is what Brahms had in mind when he marked it Allegretto grazioso (Quasi Andante), and later Presto ma non assai.

The finale though had all the spirit the composer could have wished for, brilliantly executed. One often hears a wash of string sound in Brahms, but Jurowski knows how to balance, to allow the wind and brass to be equal partners, and how to bring out inner voices. This adds immeasurably to the experience, the excitement, and the structural clarity. And when an orchestra like the LPO is so actively involved in the process as well, the results can be stunning. Driving the tempo to the end, the brass covered itself in glory with the final fanfares.

The Prelude to Act Three of Wagner’s “Die Meistersinger von Nürnberg” following as an encore finally showed that the LPO is also capable of fine slow playing, with a marvelously blended rich sonority. Maybe some years from now Jurowski will have mellowed to the point of incorporating some of that into Brahms as well.