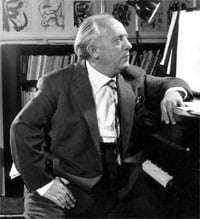 The London Philharmonic is no stranger to the music of Karl Amadeus Hartmann, having given a fine account of his Third Symphony during his centenary year in 2005. Conductor Ingo Metzmacher then spoke of programming Hartmann’s “Gesangsszene” with Matthias Goerne in a future season but, in the event, it was the orchestra’s Principal Conductor Vladimir Jurowski who took charge for a rare performance of the Munich-born composer’s final opus – left unfinished, indeed, at his death in 1963.

One among only numerous tragedies of Hartmann’s career is that, having felt compelled to rewrite his pre- and inter-war output to make it relevant to the post-war era, he had little time left for new composition. However unobtrusively, the Seventh and Eighth Symphonies both break new ground – asdoes “Gesangsszene”: a setting (in German) of lines from Jean Giraudoux’s play “Sodome et Gomorrhe” whose through-composed and yet methodical structure makes it a ‘Ninth Symphony’ in all but name.

With its prediction of cultural collapse through decadence and environmental disaster through the squandering of resources, Giraudoux’s drama makes sobering reading today and it is worth recalling that Hartmann had been planning a full-length opera on these issues. Whether or not “Gesangsszene” isa preparatory study, the piece is awash with the emotional volatility and stylistic inclusiveness that are the hallmarks of his music.

The orchestral introduction throws up a serially-inflected flute line with overtones of Varèse, while the high yet systematically deployed level of dissonance points to the influence of the European avant-garde whose cause Hartmann had championed – albeit far from uncritically – in his later years. Wisely, he chooses not to mirror Giraudoux’s often-lurid imagery in his music – instead channelling the text into a number of intensifying paragraphs before the eventual return of the flute theme and a tensely restrained epilogue that regrettably remained incomplete. 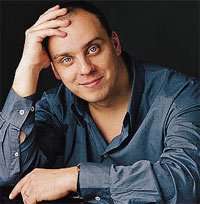 Despite too headlong an approach to the climactic paragraphs, Jurowski had a real grasp of the way “Gesangsszene” coheres as an integrated whole, as well as ensuring clarity of texture across sizeable forces (including no less than ten percussionists). Whether or not Goerne has performed it often, his timbre is ideally suited to its rhetorically-driven arioso and those incursions of pathos which make thepiece far more than a tirade of frustration against the witlessness of society.

Surtitles were initially out of step with the text as given in the programme, but this was only a passing detraction in what was a gripping performance of a work which cannot have been more necessary listening than now.

A performance that proved the highlight of this concert in all respects. Expertly as he controlled the formal unfolding of Metamorphosen, Jurowski was expressively subdued in a reading that never quitehit the mark. A full string body was utilised rather than the ’23 solo strings’ specified, but that theseadditional desks did little more than reinforce climaxes made for an unsatisfactory compromise. The LPO’s playing was rarely less than assured, often more so, but Strauss’s memorial to the passing of an epoch is heard too frequently nowadays for such an account to seem other than unexceptional.

Nor was Jurowski’s take on Brahms’s Second Symphony (given with antiphonal violins and ten double basses) on a par with that of the First he gave last season. In particular, the first movement seemed oddly neutral in conveying the music’s range of understated emotions – with the exposition repeat bringing little or no expressive intensification and the climax of the development sounding brusque rather than fateful, though the coda brought about a wistful closure.

The Adagio went much better, Jurowski’s placing of trombones and tuba next to the horns rather than behind the trumpets paying off in translucency of texture and thus underlining the movement’s innate ambiguity, while the third-movement intermezzo had just the right piquancy. Nor did the finale go seriously wrong, though Jurowski’s concern for lightness of touch meant that it capped the work in somewhat lightweight fashion: Brahms the uninhibited punching below his weight on this occasion.