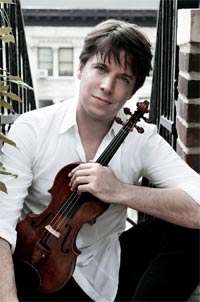 A London Philharmonic concert of wide divergent halves – its impeccably Classical first half opening with Mozart’s Thirty-Second Symphony (1779), a piece once regularly encountered as a curtain-raiser before the concerto-and-symphony format became dominant. And, with its three-movements-in-one deftly outlining the customary sonata-form design, one packing more incident into eight minutes than many contemporaneous symphonies thrice its length; something that Vladimir Jurowski was intent on bringing out in a lively though never overdriven reading which recalled the LPO as an orchestra with Mozartean credentials second to none.

Joshua Bell then offered an account of Brahms’s Violin Concerto (1878) which, as so often with this musician, left one admiring but indifferent. He and Jurowski favoured a relatively swift though by no means inflexible take on the first movement, albeit one in which contrasts between the ruminative and the incisive were not so much integrated as smoothed over as the music pursued its overly equable discourse. Bell’s own cadenza, owing more than a little to Fritz Kreisler in its expressive poise, was all of a piece with his approach. Nor did the Adagio’s central section convey much in the way of encroaching unease, for all that the movement as a whole benefited from woodwind playing of melting eloquence, while the finale found just the right balance between vigour and that sultry understatement Brahms reserved for his gypsy-inspired music. This was an enjoyable and technically near-flawless reading that yet said little or nothing new about this warhorse of the repertoire.

Vladimir Jurowski’s penchant for less-familiar fare came to the fore after the interval. This conductor amply confirmed his Zemlinsky sympathies with a fine account of the Lyric Symphony last season (as he will doubtless do next season with an airing of the opera A Florentine Tragedy), and this account of Psalm 23 (1910) made the most of the work’s (surprisingly?) objective approach to the most famous of all Psalm texts. Objective but never detached, moreover, in its methodical unfolding from an orchestral prelude of winsome delicacy, via a choral response that twice builds from initial repose to climaxes of tangible joy, before ending in rapt serenity.

From here to Szymanowski’s Third Symphony (1916) is a small step temporally and yet a considerable one conceptually. A setting (in Polish) of verse by the 13th-century Persian mystic Jalāl’ad-Dīn Rumi, this work might be thought a symphony in name only – though the composer is mindful to ensure its harmonic richness and ecstatic extremes are allied to a highly focussed formal trajectory with the often-euphoric outer sections, akin to an exposition and reprise, framing a more animated sequence in which the choral writing is limited to interjections within an orchestral ‘development’ of some ingenuity.

Jurowski expertly managed the music’s surges of emotion without reining-in its dynamic power, while the contribution of the London Philharmonic Choir lacked nothing in commitment. Slightly strained in his initial entry, Jeremy Ovenden (necessarily) came into his own during the final section with singing of no mean ardour (incidentally, Stephen Johnson’s observation of a female soloist chosen to render the male-centred text as an instance of ‘‘Soviet-Communist prudery’’ is slightly wide of the mark, as such a substitution occurred in Szymanowski’s lifetime and is not unknown in the post-Soviet era), such as enabled this singular work to exert its ever-more captivating spell.

Fine performances both, then, with the thought that, were Jurowski to follow them up with the remaining two of Zemlinsky’s Psalm settings as well as Szymanowski’s Stabat Mater, he would have all the constituents of a formidable programme for release on the LPO’s label – cohesive in content and worthwhile artistically.