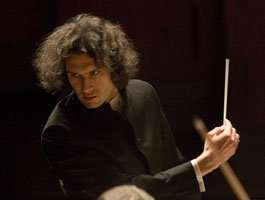 Vladimir Jurowski’s determined ringing of the changes, when it comes to scheduling new or unfamiliar repertoire with the London Philharmonic Orchestra, continued here with a first UK outing for “Mein Herz brennt” (My Heart is on Fire), a song-cycle by the German composer Torsten Rasch.

44 this year, Dresden-born Rasch ranks among the most high-profile figures from the former East Germany. His success has been largely been in the domain of music for film and television, notably the music for screening the Eisenstein classic “Battleship Potemkin” in collaboration with the Pet Shop Boys, though his credentials as a composer are undoubted. Certainly those worried they were in for a bloodless, sub-minimalist score of the type that Damon Albarn recently concocted for the show “Monkey” need have had no fears. Whether what resulted was in itself justified is another question.

“Mein Herz brennt” takes its cue from song-lyrics by the German industrial metal band Rammstein (an outfit drawing on the conceptual provocation of Laibach and visceral immediacy of early Neubaten, though without the conviction of either), translations of which were provided as surtitles on a screen whose proximity to the Royal Festival Hall’s overhead lighting console meant they were not always easy to read. That said, these lyrics – dealing with various levels of alienation and desire for transcendence – are riddled with expressionist clichés and had little intrinsic merit. The eight songs are themselves prefaced by a lengthy orchestral fantasy which demonstrates the strengths – dark-hued intensity and a sure maintaining of atmosphere – but also the failings – an over-reliance on rhetorical gestures and an orchestration that is applied with the proverbial trowel – of Rasch’s thinking in full measure.

Had this been made the centrepiece of the cycle, with perhaps two songs on either side, the reduced entity might have vindicated itself. As it was, the 65-minute whole ran out of steam well before its finish. This had much to do with Rasch’s response to his texts, two-dimensional in its lack of variation in tempo or texture and with little sense of cumulative expressive momentum as might have sustained the overall sequence. Moreover, the elements derived from Mahler and Berg were laid onto the musical content rather than integrated with it – a more personal or distinctive idiom failing to emerge. Two songs (and parts of two others) were entrusted to a reciter, yet the recourse to the sprechstimme as evolved by Schoenberg and Weill was no more convincing: in place of emotional fervour and biting sarcasm, tub-thumping bathos and witless humour were the order of the day.

More is the pity, as the writing assuredly fitted the vocal qualities of René Pape – resonant in timbre as it was enviably secure in pitch. That his voice could have been more resourcefully or more imaginatively deployed should not detract from its underlying eloquence. Nor was that of Katharina Thalbach found wanting, even if her wickedly angular delivery conceals subtleties that were barely touched upon here. Elizabeth Meister contributed an alluring vocalise to the third song, while Jurowski secured a full-blooded response from the LPO. Even its commitment, however, could not disguise the fact that Rasch’s lavish forces were more an indulgence than a necessity; one exemplified by the addition of drums and tom-toms (placed up in the choir stalls) during the would-be-climactic seventh song – a reckless gesture typical of a work whose ends were all too seldom justified by the means.

The concert had already featured a long first half that opened with a regrettably rare outing (which may well account for the audience’s nonplussed reaction) for Mendelssohn’s ‘Reformation’ Symphony (1830). Regrettable because for all its formal shortcomings, the work exudes an impulsive drama that denotes a composer poised between precociousness and maturity. Jurowski rather harried the majestic slow introduction but he had the measure of the first movement’s stormy Allegro, then dispatched the scherzo with lithesome wit and the ‘song without words’ Andante with the gentlest pathos. The Lutheran chorale launching the finale was airily rendered, yet the main portion was again over-driven – Jurowski being unable to instil the chorale’s climactic return with quite the affirmation needed. Even so, this was a bracing account of a piece that surely warrants more frequent revival.

Even finer was Mahler’s Totenfeier (1888), the many-sided tone poem that became the first movement of his Second Symphony (Resurrection) but which, in this original version, is sufficiently different in the treatment of ideas to make its performance worthwhile. Not least when given with this conviction, Jurowski inspiring the LPO to a commitment comparable with the best that London has to offer at present. With a well-received “Das klagende Lied” and First Symphony already behind him, Jurowski’s take on the ‘Resurrection’ – with which the LPO’s 2009/10 season opens – should be worth savouring.