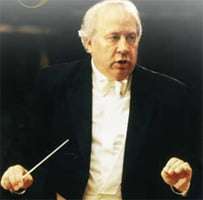 The idea of hearing Mahler’s ‘re-touching’ of Beethoven’s ‘Choral’ Symphony was, of course, an intriguing one. It (more properly, ‘they’) had not been heard by this writer (despite there being at least one recording of each of Mahler’s two versions, one conducted by Gerhard Samuel, the other by Peter Tiboris). Yet, in this London premiere (itself a somewhat ambiguous description), the event was decidedly underwhelming. What exactly was this performance the London premiere of? “Mahler’s ‘Retuschen’ version”, as the London Philharmonic’s programme-book listed it, or rather what we seem to have been presented with, namely “a final performing version by Dr David Pickett, based on Mahler’s 1895 and 1900 scores”? For this news, one had to scour Lindsay Kemp’s note. Yet, what is the point of a fourth-party (in these circumstances the ‘third’ is the conductor!) amalgamating two different scores when either is complete in itself (and, knowing Mahler, were a pragmatist-conductor’s attempt to ‘design’ Beethoven’s symphony to a specific performance).

As heard here, in a generally lacklustre account, Mahler’s intervention is no more than numerous emendations, ones of chastening and clarification. The addition of a (sparingly used) tuba is the only example of there being an extra instrument although Mahler does require additional winds and horns, and also a second set of timpani for the development of the first movement (Beethoven here allowed to stray into Wagnerian territory, and Wagner tinkered with the Ninth, too, and with Mahler’s trademark ‘bells-up’ clarinets). Mahler also extended dynamics, to range from pppp to ffff (not that such extremes fully registered in this performance).

Yet, such a ‘performing version’ (final or otherwise!) gives little clue as to how Mahler himself would have conducted the work, for he did not alter Beethoven’s tempo markings. Yet one surmises that he would have been far more flexible with speeds (not unlike his friend Willem Mengelberg) than Neeme Järvi was, who really didn’t impose himself on the music. Indeed, this was a fairly bland account, occasionally shaky in ensemble. Of course, one cannot expect any conductor to do as Mahler might have done and Dr Pickett’s ‘performing version’ (but how did he choose what to include?) is of Mahler’s editing rather than his interpretation. Thus, in some ways, Järvi’s rather anonymous conducting enabled us to hear Mahler’s emendations without further explanation, but given Mahler’s ‘treatment’ is rarely more than subtle, there were long stretches when this could have been ‘another’ Beethoven 9, a rather routine one.

Of the four movements, the first was here vital and (too) direct, the scherzo very fleet and rhythmically clean (the second repeat cut – probably by Järvi, as is most conductors’ preference at this point, regrettably, but just possibly by Mahler). The performance though came to grief in the slow movement, which was restless in the Adagio sections, hasty in the Andante ones, the overall result being perfunctory.

The finale’s opening hardly lived up to Kemp’s “noisy trumpet contribution” – yes there were four of them, but the ear heard what Beethoven wrote (and the tuba line he didn’t!), Järvi steered a pretty undeviating course through this multifarious movement, the result being more hard-driven than joyful, the London Philharmonic Choir (singing from memory) superbly unanimous and committed but with nowhere to go beyond Järvi’s beat. Mahler adds a mute to the trumpet in the march section and there seemed some re-touching to the vocal soloists’ parts (which were decently sung from behind the orchestra and in good balance) that recalled “Fidelio” (an opera that Mahler also conducted), and, in the final measures, trills for two piccolos!

Given that not even the latest (supposedly squeaky-clean) editions of Beethoven’s symphonies (those from Bärenreiter, and Breitkopf & Härtel) can agree and that conductors (particularly from yesteryear) have long done their ‘own thing’, then Mahler’s amendments (as presented here) seem of little more than passing interest (but certainly worth hearing). Mahler’s re-touching of the ‘Eroica’ is more radical.

As for “Kindertotenlieder” (Songs on the death of children, to poems by Friedrich Rückert), Matthias Goerne was in generous and dynamic voice, more a narrator than a confidant, and relishing those few moments of ‘green-shoot’ rapture. If only Järvi had opted for tempos less impatient-sounding, which would no doubt have resulted in more poised and expressive woodwind solos than emerged.