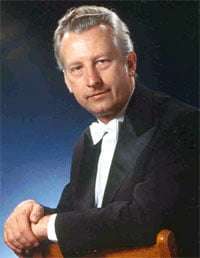 Given Günther Herbig’s considerable experience of the central European repertoire, it was a surprise and a pleasure to encounter his sensitive interpretation of Ravel’s Mother Goose, such quintessentially French music. The ‘Pavane’ delicately conveyed sorrow at Sleeping Beauty’s enforced slumber, the winds pointing up the mood with great finesse, and they also sensitively depicted the lost ‘Petit Pouce’, with cor anglais, flute, and clarinet vividly suggesting the forest birds consuming the lad’s breadcrumb trail. Delightful, too, was the chinoiserie of ‘Laideronette, Empress of the Pagodas’. In ‘Dialogue between ‘Beauty and the Beast’, the latter’s ill-temperedness was powerfully projected by Christopher Cooper’s contrabassoon before Pieter Schoeman’s violin, along with harp, shimmering strings, and flute, told of the Beast’s transformation into a Prince. The sinuous lines of the finale, ‘The Fairy Garden’, were also beautifully drawn, harp and woodwinds adding delicate touches of colour to the radiant string writing to complete a refined and magical reading. 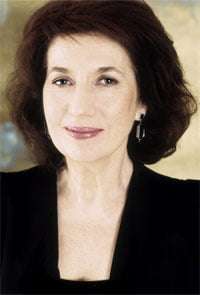 In Schumann’s Piano Concerto, the contribution of Imogen Cooper (who was replacing Hélène Grimaud) also gave much pleasure. Her pellucid reading was classically restrained but still captured the deep emotional character of the piece. The playing of both soloist and orchestra was very refined, without a hint of sentimentality, Cooper integrating decorative writing without losing its ornate individuality. In his accompaniment to Cooper’s poetic reading of the Intermezzo, Herbig coaxed eloquent playing from the cellos and woodwinds, and in the finale the balance between poetry and brio was perfectly judged, the pianist’s technical dexterity placed wholly at the service of the music.

In just the week previously, the London Philharmonic was in New York for concerts that included Vladimir Jurowski conducting Brahms’s Second Symphony. Back in London, under Herbig (born 1931), the musicians gave the same work in a performance both muscular and exhilarating but also full of lyricism. The string-playing in the first movement, and some lovely horn solos, were just two examples of the richness to be relished throughout. There was some gorgeously cantando playing in the slow movement, especially from cellos and winds, emotional temperatures always kept within tasteful bounds. The Allegretto grazioso was delightful, the contrasts between woodwind, horn, and string writing being pointed up with both wit and affection; and, aided by heady playing, the spirited finale was propelled inexorably towards a glorious conclusion. Günther Herbig does not often conduct in London, but on the evidence of this superb concert, he really should grace the capital more often.

One (unrelated) gripe! The pre-concert and interval announcements in the Royal Festival Hall have become similar – in terms of their repetitiveness as well as in their loudness and the style of address – to those inflicted on British Rail customers at Waterloo Station, and are quite inappropriate to an arts venue.