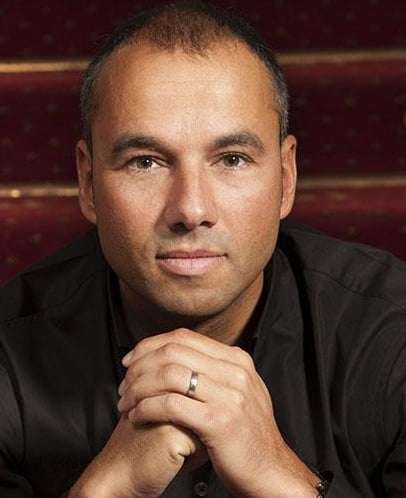 This concert would have been conducted by a ninety-four-year old Stanisław Skrowaczewski, but, following his death in February this year, Lawrence Renes took up the reins. His account of Bruckner 8 – conducted without a score and utilising antiphonal violins – was generally lucid and crisp, rather than straining too stridently or feverishly towards high emotionalism for its own sake. Despite bright, even piercing brass (such as the trumpets’ searing and devastating climax towards the end of the first movement) and sweet-toned strings, no particular section of the London Philharmonic Orchestra dominated another, but often an array of instrumental detail was revealed which can be submerged, including some sequences from the brass. The deep throbbing of the double basses’ ostinato at the opening of the Adagio was another such example.

If the analogy of Bruckner’s Symphonies as “cathedrals of sound” holds good, then Renes’s interpretation was not a monolithic entity, but as though comprising a nave with two arcades of differing but complementary designs. Where the first and the third, Adagio, movements were focused and steady, generally taking some time to unfold, the Scherzo and final movements were more driven and purposeful, with heavier, more probing textures.

Consistent throughout the whole, however, was the fluency of Renes’s direction, bringing air and suppleness to the music. True, the first movement was cautious and weary-sounding, not uncovering the music’s exploratory or troubled content, but it grew in confidence and stature, and perhaps exemplified a longer-term strategy of allowing the music to develop in feeling and import by allowing contrasts to emerge organically across the movements, rather than starkly juxtaposing them. Likewise in the Adagio, after the pregnant opening section, the LPO traced a cogent trajectory towards the overwhelming climax with cymbals and triangle, even with the cut (which makes it Nowak’s edition played rather than the stated Haas) that follows the immediately-preceding if lesser climax. The effect of that central climax here made all the more impact on account of the clean and lithe ascent of the chords, undergirded by brass, which led up to it, and which can often sound lumbering and clumsy.

The Finale, in its emphatic manner, took up from the Scherzo, though it also did not forget to look back to the playful dialogue between strings and harp of the latter’s Trio section, as the strings also brought consolation and joy in the Finale’s quieter passages, if not necessarily something transcendent and otherworldly. Again, a judicious tempo kept the music moving without compromising its moments of grandeur and beauty. Clocking in at around eight-five minutes, this reading of Bruckner 8 was efficient and well-paced, but was telling in the moments when the tempo was relaxed, not least in the deliberate concluding cadence. Occasional uncertain intonations from horns or oboes (for example) were incidental imperfections, fortunately marring the performance very little. Renes’s way with Bruckner is appealing and I, for one, would welcome more by this composer from him.