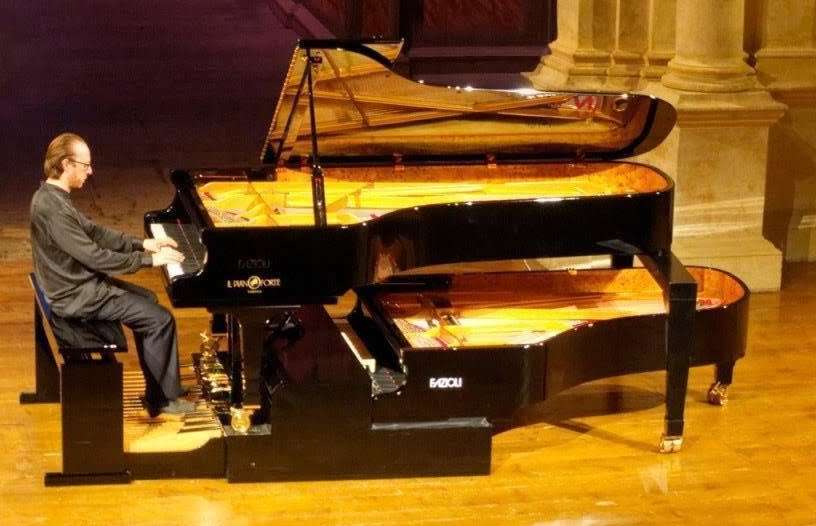 What an extraordinary concert. Rarely have I entered a hall with such a buzz going on around the stage, though one glance was enough to see what warranted such attention: the towering edifice that is a pedal piano. It’s like a Steinway smash up: one piano, with legs only knee-high under a second smaller piano supported by a wooden gantry at the back. At the keyboard end a large footplate of pedals connects to the lower keyboard. To all intents and purposes it looks like a double-decker piano.

While I might have expected a page in the programme explaining more about the intricacies and history of the pedal piano, what little information there was elicited the fact that it was developed, in part, as a practice instrument for organists at home. Given its size, I did wonder if it was not more practical to have an organ at home instead of this beast. I also gleaned it was quite popular in the nineteenth-century and that Schumann and Liszt both wrote for it, as did Alkan and then Gounod, though his preferred player, Lucie Palicot, to whom he gave exclusive rights, promptly remarried and gave up performing for good. Our soloist, Roberto Prosseda, who for the last seven years has made this instrument something of his speciality, implied that, as far as he knew, this marked the instrument’s debut in modern times in Britain.

Gounod’s Concerto for Pedal Piano and Orchestra is a four-movement work in the genial style of Saint-Saëns: I mused whether the solo part could be played on an organ (presumably). With busily buoyant outer movements, an ebullient Scherzo (placed second) and a sombre slow movement – heralded by a mournful horn refrain – this is very enjoyable music. Prosseda is a persuasive exponent of both instrument and piece and it was fascinating to see his nimble footwork – from the start, after a suitably bombastic orchestral introduction, the pedal piano’s first entry is for feet alone; and near the start of the Finale, there’s a sprightly fugue: right-hand first, then left, finally feet. Both as a performance and a spectacle this worked a treat, and there was no surprise that the enthusiastic reception resulted in an encore – the fourth of Schuman’s Canonic Études. Given the size of the team that took most of the interval to disassemble the instrument it’s not going to be a regular sight, but I’d certainly welcome another hearing.

Both orchestra and conductor made their mark, too, as they already had done in Messiaen’s Hymne, reconstructed from memory after the Second World War as the original score had been lost. It’s an effective ‘overture’; its second theme utilising a woodpecker call, and especially revelling in burnished colours in sound. It typified another invigorating programme offered in the LPO’s season – a French evening, given by Italians, which paired the unusual with the popular.

The first half with its novelties would have marked out this concert as notable; to append it with a jaw-dropping performance of a work that, for once, lived up to its name was even more remarkable. Oleg Caetani, reminding me of another tall Italian conductor, one Carlo Maria Giulini, conducting without a score (and with the players using his own set of parts), fashioned an idiomatic account of Berlioz’s Symphonie fantastique that cleared the fustiness of sloppy past performances. Everything was crystal-clear: the opening crept in almost as unannounced, wind passages had a pocket or air around them; the pairs of harps – antiphonally placed – were atmospheric in their evocation of the second movement’s ball; the offstage oboe naturally balanced against the cor anglais at the opening of the ‘Scene in the Country’. Most astonishing – tangible even – was the percussion. Following Berlioz’s instructions to the letter, the hard sticks not only on drums but on timpani too at the climax of the ‘March to the Scaffold’ was frighteningly effective; similarly so with all the effects Berlioz writes in the ‘Witches’ Sabbath’. Caetani placed the bells off-stage – saving them from the dark bacchanal, sounding their repeated motif from which the brasses’ ‘Dies irae’ is built, but it’s the darker forces that combine to overwhelm all at the end.

Caetani, who I haven’t seen since his 2006 performances of Vaughan Williams’s Sir John in Love, was on masterly form, and the London Philharmonic Orchestra rose to the occasion splendidly.