The opportunities for young composers to work with a professional orchestra are all too infrequent, making this pre-concert event – the result of a three-month project involving the London Philharmonic Orchestra, conductor Clement Power, composer Jonathan Cole and the orchestra’s Composer-In-Residence Mark-Anthony Turnage – the more valuable. Other than fulfilling their brief of lasting no more than seven minutes, the three pieces were vividly contrasted as to sound and content.

White noise, as a phenomenon in itself and as a factor in analogue radio whose days of broadcasting freedom are now numbered, was the premise behind Mica Levi’s Interfear – its waves of dissonance skilfully imagined for ensemble. Taking its cue from the German word for “migratory restlessness and the migratory drive in birds”, Steven Daverson’s Zugunruhe unfolded as a series of scintillating and constantly-changing textures whose final evanescence was vividly imagined and lucidly realised. Less ‘high flown’ in all senses, Gavin Higgins’s Rage Dances is a sequence as evocative of the symphonic band as of the jazz ensemble; and with an unpredictable follow-through the composer likened to that of Manga cartoons popular in Japan, albeit with a distinct sense of ‘arrival’ by the end.

Sympathetically directed by Clement Power (assistant conductor of Ensemble Intercontemporain) and a welcome showcase for up-and-coming talent: were these pieces to be made available for downloading from the LPO’s website, then so much the better. 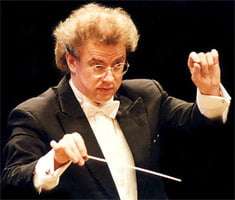 There was a certain old-fashioned symmetry about the LPO’s ‘main’ concert, an overture-concerto-symphony format such as one encounters all-too-rarely these days. With Osmo Vänskä at the helm, however, the music-making was anything other than staid.

When overtures were the norm, that to “Tannhäuser” (1845) was among the most popular; with good reason, as few opera overtures give as inclusive an overview while being so self-sufficient as a concert item. Vänskä found nobility without stolidity in the opening Pilgrims’ music, while the Venusberg element lacked nothing in fantasy or Tannhäuser’s song in vitality. The amalgamation of themes at the close was perfectly judged, in an apotheosis whose grandeur was shorn of all bombast.

Beethoven’s Violin Concerto (1806) followed, in a performance that found Lisa Batiashvili on good if not exceptional form. In particular, the first two movements were not without instants when rapport between soloist and conductor was less than absolute; the opening Allegro was decidedly ‘non troppo’ and, ironically, it was only after an enforced pause near the end of the exposition – Batiashvili having broken a string – that the movement really got into gear. Interesting, too, that Kreisler’s first-movement cadenza drew the most passionate and also communicative solo playing in the entire work. The Larghetto was nothing if not heartfelt for all that the movement seemed to slow markedly over its variations, and the finale had the right uninhibited verve. If not overly insightful, Batiashvili’s was an unfailingly musical approach – and the opportunities for interplay with the orchestra were eagerly seized upon.

Audience enthusiasm was transmuted into restlessness at the outset of Sibelius’s Fourth Symphony (1911) that followed the interval. This uncompromising piece is no more a crowd-pleaser now than at its premiere almost a century ago, but it helped that its finest modern exponent was directing proceedings. The sombre opening movement evinced a powerful cumulative force (its ‘quasi adagio’ marking never too literally observed), channelled effortlessly into the tensile energy of a scherzo whose ominous aura was reinforced by Vänskä’s refusal to indulge in expressive over-emphasis. The ensuing Largo was appositely the symphony’s brooding heart – its gathering of motivic meanstoward melodic ends securing a measure of transcendence in the closing pages. Surprisingly, Vänskä did not effect an attacca into the finale, the tonal conceit of whose opening is then the more effective. However, the movement itself was superbly controlled as to overall momentum – the imploding of the climax intensified by Vänskä’s refusal to underline its tonal dislocation as the resolution towards which the work has been heading, and whose stoic coda needs no undue emphasis to feel conclusive.

With the LPO on notably fine form, this was a performance to reinforce the work’s standing among a select handful of symphonic masterpieces – its austere yet anguished inevitability palpably conveyed. Vänskä’s London appearances have never been numerous, and it is to be hoped that his association with this orchestra – which has resulted in some fine concerts over recent seasons – will continue.