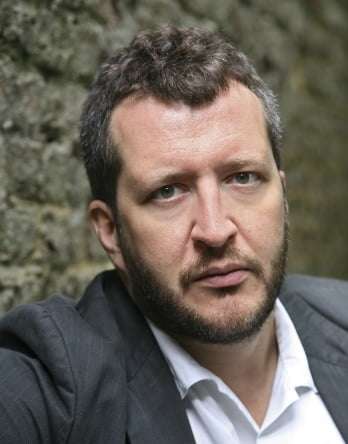 For those who can’t get enough of Thomas Adès’s Powder Her Face, there is the original four-hander chamber opera itself, first seen in 1995, then in 2007 a short set yoking together the Overture, Waltz and Finale arranged for large orchestra, and now the fleshing out of the 2007 material with more numbers, including instrumental versions of vocal solos. There is also a piano version of four scenes. The Suite is a commission from a consortium of orchestras and was first heard in Berlin conducted by Simon Rattle last year and has been played in the US.

The stage-work itself is a tour de force and succès de scandale rolled into one and launched the career of the then twenty-four-year-old composer homing in on the Duchess of Argyll’s spectacular and promiscuous road to ruin and her pathetic end. Adès’s music parades both his prodigious mastery of various influences and witty assimilation of sleazy dance music and jazz. His rewriting for large forces is brilliantly imagined, with plenty of wailing, dissipated solo-work for woodwind, seductive string writing, and expert distortions of rhythm and phrasing – and its sheer bravura catches the period flavour of chic degradation in high places in the 1950s and 1960s. At twenty-five minutes, it is long enough for longueurs, but this version of the Hotel Manager’s eviction of the elderly, confused Duchess, leading to a disintegrating Finale works well, and the LPO played with great style. For now, though, the opera comes round often enough to make it the first point of entry into the story’s murky glamour.

Adès is a friend of Gerald Barry and a champion of his music, and sometimes you wonder if the urbane Adès ever hovers wistfully on the brink of Barry’s stupendous, unleashed world of musical anarchy. The wild, often blunt gestures his music makes are tempered by a weird logic, a cartoonish humour and, I hope, affection. Take his Organ Concerto, first heard in Birmingham, with Thomas Trotter fearlessly taking the instrument (Barry’s own when he was a boy and a young man) beyond our and its experience. Trotter has to contend with a Ligeti-like episode for massed metronomes, huge cymbal clashes, emphatically protracted rising and falling scales (stealing the organ-pedals’ thunder, perhaps), a heavy-breathing harmonium and a laboured ringing of the Angelus. Barry explains: “I was very fond of the metronome, and its pyramid shape made me fond of Egypt.” So that makes that clear. No doubt he has got the whole Planet Organ ethos in his sights, and perhaps the opening, a clumsy, hesitant duet between trumpet and organ, is making a point about wind instruments that do and don’t breathe. With wrong-sounding notes by the fistful and an awkward hold on ensemble, the solo part has long given up the search for a lost chord as it circles round the basic components of a hymn “humiliated and insulted”, the stabbing repetitions of which cohere into a rousing peroration. Surreal, exuberant and, at seventeen minutes, not hanging about, the Organ Concerto makes you wonder whatever is next up from Barry. Adès’s direction was a masterclass in control and the LPO’s playing was defiantly spirited.

Adès’s finesse of ear and pace was to the fore in a rare performance of Stravinsky’s Perséphone, his 1933 choral-ballet/cantata, an effective antidote to the excesses of the first half. André Gide’s retelling of the Greek myth of the goddess Persephone’s journey to Pluto and Hades and her return to the world of the living caused the composer many problems, but his setting for the natural course of the seasons is refined and beautiful, an example of his neoclassicism at its most serene and pastoral. Kristin Scott Thomas’s recitation, in flawless French, as Persephone was both cool and passionate, Adès folding her contribution neatly into the orchestra. Toby Spence was on sweet and warm form for the high, lyric tenor role of the priest Eumolpus, the London Philharmonic Choir gave the text an idiomatic French luminosity, and the Trinity Boys Choir distinguished itself in the music for the last of the three scenes. Adès was excellent in his minutely observed tempo fluctuations, so that the music’s texture and line breathed, and the LPO proved how at home it is in the varieties of Stravinsky’s style.