We’ve reached post-war 1940s in the LPO’s year-long survey of Stravinsky’s output. Vladimir Jurowski decided to pair the mercurial composer’s sparse ballet-score Orpheus (for Balanchine, 1948) with another dance-related creation based on classical Greek mythology, Beethoven’s The Creatures of Prometheus. 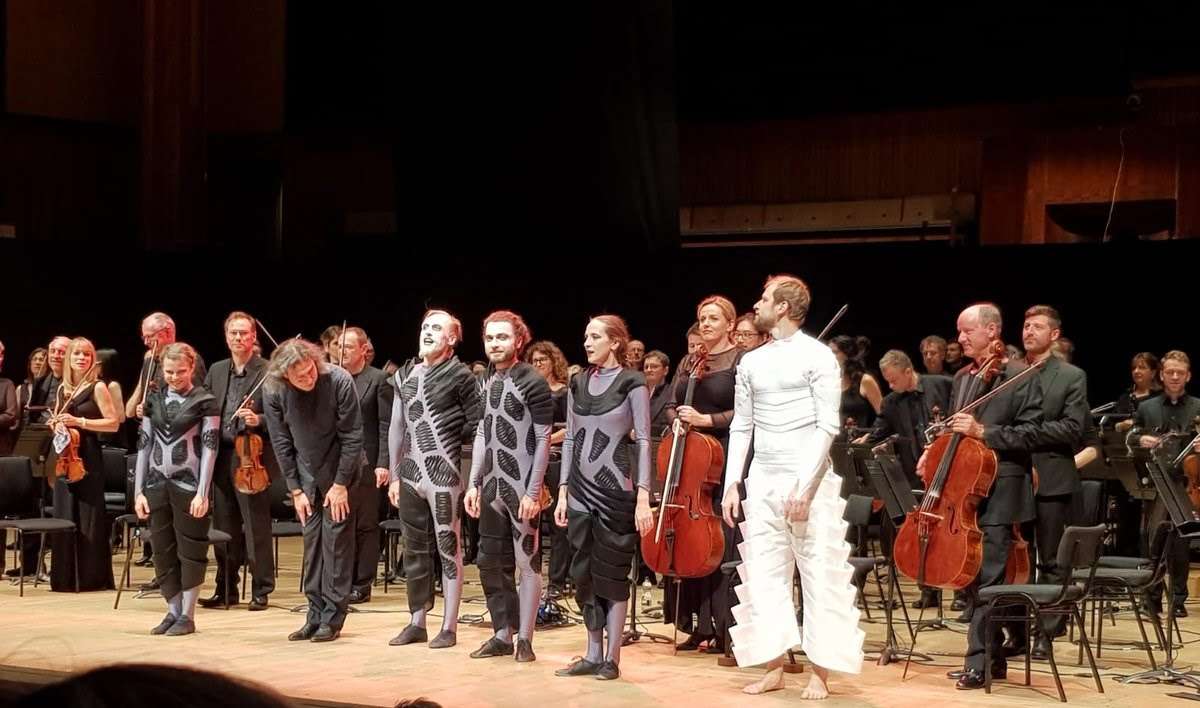 Somewhat late in the day it was announced that this concert would also feature Russian company Theater Trikster, so the choir area was subsumed with black drapes to the side and a white sheet – cinema screen like – in the centre above the concert platform which, unusually, was without risers. The last time I’d seen that was for Lorin Maazel’s penultimate London concert (Alpine Symphony and Zarathustra, review-link below) and there is a notable benefit to the acoustic: a fuller balance with a more natural resonance.

Jurowski favoured antiphonal violins for the Beethoven, with double basses behind the cellos to his left. The small forces (including – for the only time in Beethoven – a harp) were placed toward the back of the platform, bassoons and clarinets abutting the now-deep drop of the back wall, leaving the forestage as an acting area for the five-strong Russian troupe.

Entering opposite Jurowski (in black) was Trikster’s co-director Viacheslav Ignatov, imposing all in white, with a geometric costume. They bowed to each other and Ignatov ushered Jurowski towards the conductor’s stand for the spirited Overture. Ignatov returned, as Prometheus, with the crucible of fire he’s stolen for the Gods, as bolts of thunder were silhouetted on the white sheet above, the first of an ongoing shadow-play presentation, which sees our Prometheus mould humanity from clay, which spring to life in the shape of the other four members of Trikster. When they eventually break out from behind the screen – in black costumes with distinctive hand-print blotches – they appear on the forestage with puppets that eventually untangle themselves into the gods that are meant to educate the humans – most recognisably roly-poly Bacchus with his wide inane grin, cup in hand. With just five performers, the panoply of muses, graces and other gods that Salvatore Viganò’s original scenario stated couldn’t be properly represented and – given the colourful productions Theater Trikster seem to trade in – the monochrome presentation could hardly match the colour of Beethoven’s orchestration.

The mime show accompanying Orpheus worked much better – although I was mystified by the pair of outsize e-cigarettes used as torches on either side of the stage at the start. Thereafter there was a succession of arresting images – the angel of death presenting Orpheus (Ignatov again) with what looks like a white helmet to travel to the Underworld; the tragic return journey when Orpheus takes off the helmet and looks back to see Eurydice and loses her forever. The effect of their outstretched hands, pulling apart like elastic was fantastic. Only in the third and final scene – with the white sheet dropped so we could see back to the organ console – was the harsh single light source too bright for Stravinsky’s cool, quiet conclusion.

There had been a number of stage changes for the Stravinsky – the walls of the choir had been covered by black material, the winds were now raised on small risers and the cellos and second violins had swapped. But Jurowski’s laser-like musical acumen was common to both scores, and his players were alert to his every instruction. Solos in the Beethoven included the walk-on part of Paul Richard’s basset horn (another unique Beethoven usage), Rachel Masters’s harp, Ian Hardwick’s oboe and, as Apollo, Kristina Blaumane’s cello, all exquisitely taken. The Stravinsky – much more aloof in its neoclassicism – fared equally well, in a wholly satisfactory performance (already available on LPO Live, link below).

While I didn’t mind the visual accompaniment, courtesy of Trikster, I would have been happier for just the musical performances, given the quality under Jurowski’s assured direction, especially given the rarity of hearing the Beethoven in full. But given that both these scores were written for the stage, the thought process that resulted was perfectly sound: just another indication that Jurowski is always thinking about the presentation of his concerts.