“At last a genuine fortissimo” Mahler is reputed to have said on visiting the Niagara Falls. One suspects he would have had a similar reaction at the close of last night’s packed concert which was undoubtedly a special occasion as any performance of the Resurrection surely needs to be. I gather that the composer’s granddaughter, Marina, was in the audience. The evening opened with a performance of Metamorphosis, the concluding part of a larger work, Renewal, by Colin Matthews to words by the Latin poet Ovid reflecting the impermanence of all things. This elided seamlessly without any break into the Resurrection, an imaginative opener. 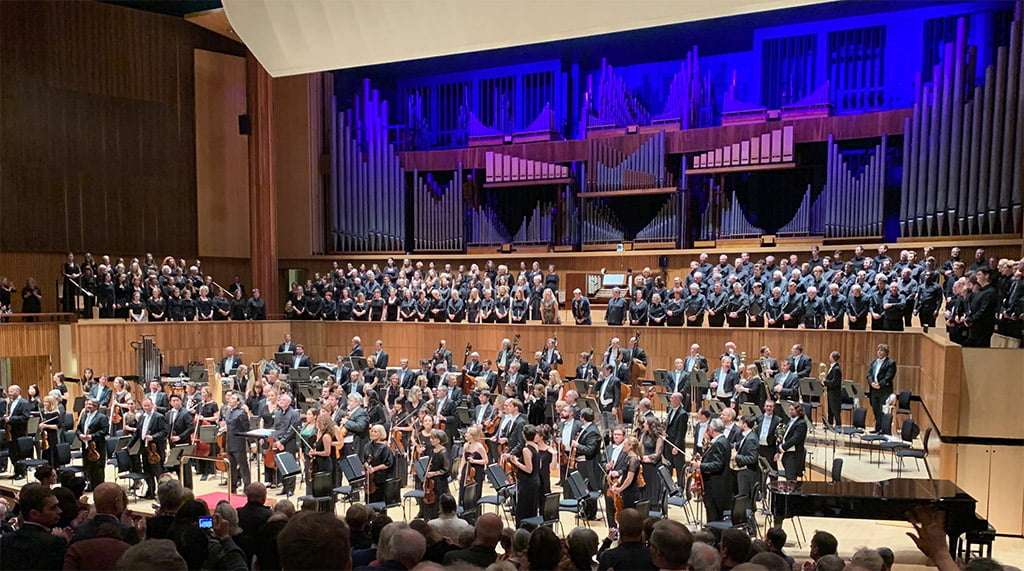 Matthews’s work is for a very large orchestra and a rather smaller choir and is an impressive processional with shades of the atmosphere of the quieter sections of Stravinsky’s Symphony of Psalms. For the most part it is slow, quiet and reflective as one would expect with a text dwelling on the fact that “All things are changed” (omnia mutantur) and “Nothing in the whole world endures unchanged” (nil est quod perstet toto in orbe), but occasionally flares up into unexpected outbursts. The ending with its tolling bell effect was especially memorable. It was confidently and securely projected by the reduced choir and massive orchestra, used with great discretion.

Without any break we were plunged into the turbulent opening of Mahler’s symphony. When the Royal Festival Hall first opened Leopold Stokowski wrote to The Times pointing out that the wood-clad hall was bass light and that the best way to achieve a good bass sound was to range the double basses across the back of the stage. Jurowski with 10 basses did precisely that and the effect was immediate, combining vehemence and weight. What was also particularly satisfying was the genuine attempt made by the orchestra to come to terms with the dynamics – Mahler sometimes marks forte to piano and back again within the same bar. For the most part tempos were similarly well chosen, for example, with a decisive lunge onward where Mahler marks Vorwärts (forwards) at various points in the first movement.

Slightly less convincing were the tempos in the two succeeding movements, the second a Ländler which contains the injunction “never hurry” and the third, based on the Wunderhorn song about St Anthony of Padua’s sermon to the fishes, which is marked “in a peaceful flowing motion”. Both were neatly, if slightly reverentially, played, the Ländler a tad literal which belied its dance origins and lazy grace, and St Anthony’s sermon a little too severe for the passage marked Mit Humor to emerge fully That said, the pizzicato section towards the close of the Ländler and the final section of the succeeding movement were both wonderfully poetic and sensitive, the music at that point fading away and ushering in the Urlicht (Primal Light).

This gave us the chance to welcome back the much loved mezzo Sarah Connolly who was on top form. This was riveting and all the more welcome since really good mezzos are in short supply.

The huge final movement opens with a seismic cataclysm but thereafter – at least in some hands – the journey to the concluding Resurrection can seem a long one. Not here. Possibly Jurowski’s operatic experience helped him sustain tension over sections which can drag. The march of the dead was delivered with tremendous thrust. Special praise too to the trombone section as a whole for their well balanced sepulchral contribution, especially the first trombone for his all-important cameo solo. The antiphonal off stage brass resounded grandly from the upstairs Gallery. The London Philharmonic Choir and London Youth Choir were generally impressive too but it is fair to say that they had one or two less-than-secure moments. Both soloists, Sarah Connolly now joined by the soprano Sofia Fomina, were self-effacing but outstandingly sensitive as they emerged from (but did not dominate) the texture; they had both sat immobile immediately in front of the organ since the arrival of the full choir at the end of the first movement, an elegant solution to the usual problem of when to bring on the soloists without disrupting the performance. Jurowski built the final climax cannily reserving just enough power for the orchestra to cap all that had gone before at the close. A special occasion.