Wagner
Das Rheingold – the preliminary evening to Der Ring des Nibelungen – music-drama in four scenes to a libretto by the composer [concert staging; sung in German, with English surtitles] 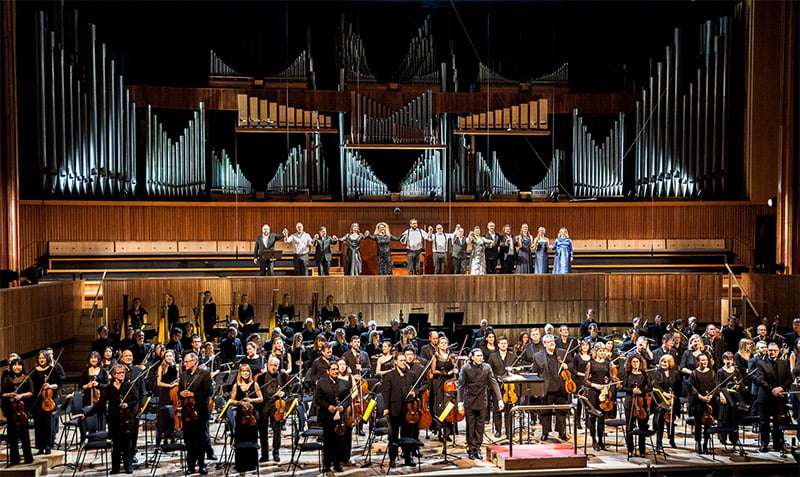 In case any justification were needed for the initiation of a ‘Ring’ cycle by the London Philharmonic Orchestra (not yet having had the opportunity to do so in its residence at the Glyndebourne Festival) the cause for it now is to celebrate Vladimir Jurowski’s ten years as the LPO’s Principal Conductor.

Few other works in any art form attempt to deal with such a vast, or even comprehensive, canvas of human affairs, and its themes are as perennially suggestive as they are inexhaustible. If parallels between Das Rheingold and the contemporary world need to be sought, it is surely not too glib to suggest that Alberich’s attempted seduction and molestation of the Rhinemaidens, and Wotan’s bartering of Freia, the goddess of love, stand as particularly potent episodes in relation to our heightened awareness at this present moment of sexual harassment and the role of women within the male-dominated structures of society.

This generally straightforward concert staging of the “preliminary evening” of the ‘Ring’ eschewed any interpretation of its own, however, allowing the characters to come and go within the choir area of the Royal Festival Hall, elevated over and behind the LPO – as it happens conveniently mimicking the relative positions of singers and orchestra at Bayreuth, even if the players necessarily remained wholly visible. The singers projected well over the orchestra, apart from the Rhinemaidens who sounded a little distant except, paradoxically, in the final scene, as they lamented the loss of their gold from an extreme far corner performing area, supposedly in realisation of their mournful song, unseen, from the river far below Valhalla in Wagner’s staged drama. Where Sofia Fomina was alluringly bright and gently-voiced, her accomplices Rowan Hellier and Lucie Špicková were a touch more restrained and squally. 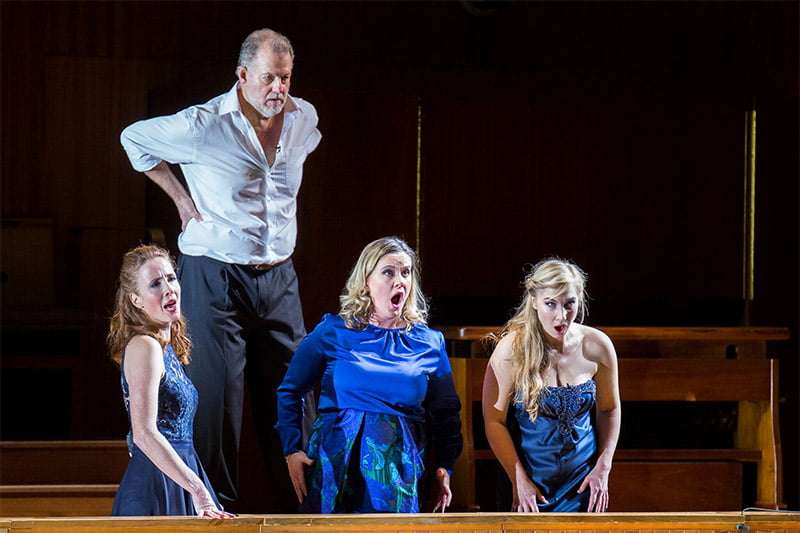 Atmosphere was effectively conjured by Malcolm Rippeth’s lighting. The auditorium was not plunged into primordial darkness at the beginning but only mired in some gloom, and although more light emerged during Scene One, the gold itself was not denoted or symbolised by any object or beamed shapes or forms. Spotlights illumined the exposed ranks of the Festival Hall organ from below in Scenes Two and Four as an effective substitute for the fortress of Valhalla – payment for which is the very reason Wotan enters into dubious bargains with the Giants and the Nibelung dwarfs.

Robert Hayward’s Alberich was musically authoritative in suggesting, at least initially, a somewhat more sympathetic character than a simple villain, although his starkly enunciated singing expressed the dwarf’s determination. Only in Scene Three was there a moment of vocal weakness at the point by which Alberich has become irredeemably evil. Matthias Goerne – the only singer to perform from a score – sounded already wearily noble and withdrawn from the world, even tentative and nervous in his depiction of Wotan, which was commendable and consistent in itself, but premature at this early stage of the narrative and the chief god’s development in self-knowledge and renunciation.

The other roles were generally well cast. Among the gods was a steely Fricka from Michelle DeYoung; sweet-toned radiance in Lyubov Petrova’s portrayal as Freia; efficiency and clarity in Allan Clayton’s brief appearance as Froh; and sufficient weight from Stephen Gadd’s Donner, if a somewhat wide vibrato caused his summoning of the thunderstorm near the end to lack just the last degree of heroic incision and command to set a climactic seal after more than two hours of music. Anna Larsson’s Erda was quietly steady, and therefore haunting, as she counselled Wotan to give up the ring as well as advising that all things must have an end. 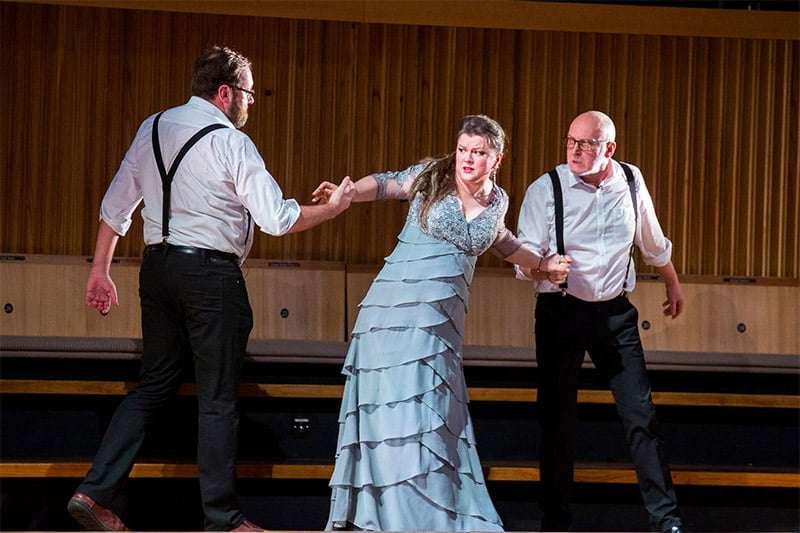 Vsevolod Grivnov was a replacement as Loge and, although he sang with something of a drawl, he did capture the role’s mercurial, whimsical character, carrying well, vocally. Similarly, in a part which often elicits a somewhat caricatured interpretation, Adrian Thompson’s Mime bore a certain humanity and musical integrity of his own. Matthew Rose sounded as resolved and firm (if a little colourless) as is his character, the more eloquent giant Fasolt, in his dealings with the gods, compared with the darker, more threatening tone of Brindley Sherratt as the thuggish, Fafner, who kills his brother in a fit of jealous rage over the ring they have secured from Wotan.

Jurowski led the LPO in a lithe and lucid account of the score, often drawing vivid, iridescent colours from the instruments, and not only for the sequence accompanying the rainbow bridge where the glistening timbre of six harps sounded evocatively through the luminous texture. With minimal use of vibrato the strings were generally lean and agile, not bathing Wagner’s continuous orchestral backing with rich washes of sonority. That enabled the tones of the enhanced woodwind section to come through all the more clearly – such as from their low registers at the first appearance of Alberich, and later in the descent to Nibelheim – as well as their warm integration with the brass. The latter was richly sonorous in the Valhalla music, and subtly and softly drawn for the mysterious leitmotif denoting the magic of the helmet Tarnhelm.

If Jurowski’s interpretation tended not to delineate the overall symphonic sweep of the score across its wider structure with much heft – for example in only really maintaining just a moderately loud course over the long expanse of the Prelude rather than a great accrual of momentum and volume as the World is called into being – he did trace the more immediate sense of Wagner’s principle of continuous melody at a closer level with his tight control of the music, and pointing up its gestures and cadences to create localised climaxes as though the punctuation and paragraph markers within a text. In general, then, this was a consistent account of probably the longest continuous piece of music in the entire canon, and augurs well for the subsequent instalments of the tetralogy which will follow over the next three years.