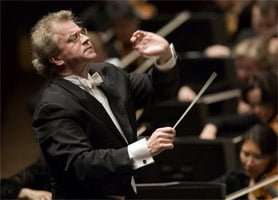 It was in December 2007 that Osmo Vänskä conducted the London Philharmonic Orchestra in a superb performance of Rachmaninov’s Third Symphony. Happily it was recorded and issued on the LPO’s own label (0036), unusually if rewardingly coupled with Bax’s Tintagel (from the same concert). Five years later, Vänskä – typically virile and demonstrative on the podium, but always clear and meaningful in his gestures – led another inspired reading of this imposing if underrated symphony, which was completed in 1936, away from Russia, in Lucerne, and destined for the Philadelphia Orchestra and Leopold Stokowski, and with more-biting expression than in Rachmaninov’s previous works. His sophisticated scoring is a masterpiece in itself, dressing music of deep sadness, dramatic force and emotional fervour.

Here the muted opening was a little uncertain, competing with some hubbub still present in the audience (those who chatter), and almost sunk by those who cough, for throughout the performance (and also in the first half) some proved insensitive and unacceptably interruptive in this regard; and if you were near enough to the woman in question, then some bars in Rachmaninov’s first movement were disfigured by her audibly dredging the remains of a drink through a straw – how vulgar and thoughtless (but her seat number has been identified). Some audience-members’ heads shook in disbelief at the close of the slow movement when its lingering fade-out was obliterated by consumptive racket (so ignorant of the music and its rapt appeal), one patron retorting: “It’s like a farmyard in here.”

Aside from such regrettable scars, Vänskä led a dynamic and colourful account of music that the LPO knows well (Mark Elder conducted ‘Rach 3’ in May 2009, in a RFH concert also including Dvořák’s Violin Concerto). If the playing was sometimes under challenge, then this is a super-virtuoso work and Vänskä was demanding on behalf of its impassioned and volatile expression. Away from Rachmaninov’s popular music, the Third Symphony has an intricacy and darkness (if translucently lit) that is utterly compelling, whether sweetly sentimental, Vänskä avoiding the Hollywood associations that can befall this music, or wildly compulsive, the faster music here moving apace, sometimes threatening ensemble, but with the fugue in the finale being the devil’s own work, and the closing bars driven and defiant. Climaxes glowered, low brass threatened through weight and growl rather than mere loudness, strings were bright and intense, and solos were often exceptional, not least on horn from David Pyatt (a guest from the LSO) and on flute from Daniel Pailthorpe (BBC Symphony Orchestra); indeed quite a few of the Principals had been drafted in. This was a performance with a few spills but many thrills and with much to savour and connect to; Rachmaninov at the height of his powers.

Vänskä wasn’t going to play ‘second fiddle’ to Christian Tetzlaff in Dvořák’s endearing Violin Concerto. The conductor retained the LPO’s full string strength, including eight double basses, and ensured that the relationship between violin and woodwinds was under rewarding scrutiny. With the LPO cooperative and characterful (horns, sans Pyatt, especially excellent), and Vänska animated to enlivening effect, Tetzlaff was able to give a fiery, thoughtfully expressive and technically impeccable account, involving and captivating, the first two movements, ‘attached’ anyway, made indivisible, the slow one tender, agitated and hushed. The finale was particularly nifty, just a little ‘squeezed’ at times, an impetuous and foot-tapping Slavonic Dance. As exhilarating as it was, though, come the coda and the necessary ‘kick’ to the finishing post, there was nowhere for the performers to go in terms of increased speed. Encores are all the rage these days. For violinists such ‘extras’ usually mean Bach or Ysaÿe. Tetzlaff chose Johann Sebastian, the ‘Gavotte en rondeau’ from the E major Partita (BWV 1006), poised and nimble with just a little ‘authentic’ acerbity.

As a curtain-raiser, Carl Nielsen’s Pan and Syrinx (1918) enjoyed responsive solo strings opening a suggestive and restless piece that finds its composer characteristically rustling the surface with discursive percussion and a clarinet cadenza (Fiona Cross), thus reminding that the Fifth Symphony was waiting in the wings, and that Nielsen’s Sixth would culminate his whimsical, complex and profound rebuttals of life’s exigencies; in the meantime this anything but ‘Pastoral Scene’ veers between Impressionism and obliqueness via a bacchanalian flare-up. Nielsen’s originality and innovation was given full value, the LPO in relishing form, and if it was Greek to some (although Andrew Mellor wrote a helpful introduction), it made a novel concert opener that could only have been by this great Dane.