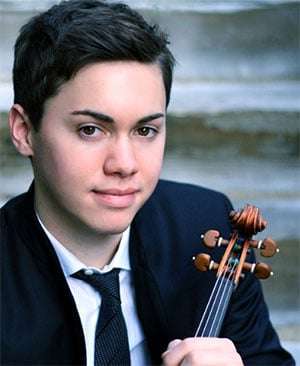 Stanisław Skrowaczewski, 90 years young, here led a magnificent Bruckner 3. Beforehand, in a concert lacking an overture (a sadly neglected species these days), we were sent coldly into Mendelssohn’s ubiquitous E minor Violin Concerto. At least it introduced someone new, a young American soloist, 24-year-old Benjamin Beilman, a winner of a Borletti-Buitoni Fellowship and an ambassador for the London Music Masters, its Bridge Project showcased in a pre-concert event.

To an attentive and smart accompaniment throughout, Beilman’s opening measures were a little nervy, understandably, with some odd ‘clicking’ sounds that I can only attribute to his instrument. As he settled, he offered generously phrased, warmly-sounded yet quietly-intimate lyrical playing, and if the faster passages sometimes lacked poise there was a compensatory ardency and dynamism, although he queered his tone on occasions. If the first-movement cadenza was in many ways exceptional given Beilman’s fantastical approach to it, then the slow movement could have relaxed and expanded just a little more and the finale was too nifty, if executed with agility, the notes squeezed into place rather than fully expressed. Nevertheless, this was a talented performance and gave the promise of plenty of good things to come.

After the interval, Skrowaczewski, his score remaining unopened, and standing throughout (no chair in any case), was fully inside the hour-long Bruckner, capturing vividly the composer’s trademark agony and ecstasy with a volatility that raised the game of this ‘problem’ Symphony with its choice of several editions and numerous interpolations. This final (1889) edition of the Third may be the most succinct of them but it is also structurally abrupt – one commentator has dismissed it as “an abortion” – and with the (longer) Original Version’s most inventive and personal features ironed out, with possibly Bruckner coerced into making the changes. He did though manage to leave a couple of quotations from his idol Wagner intact (although the senior composer would have wished it otherwise): a hint of Tristan in the slow movement and a more overt reference to the ‘Magic Fire Music’ in the finale. 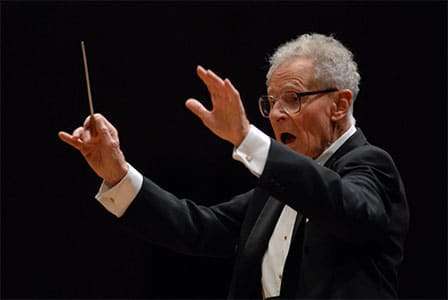 All this aside, with the LPO offering a refulgent and vibrant performance, Skrowaczewski conjured a first movement at once urgent and heroic, fizzing with intent and incident, in which tender asides melted the heart and the music’s recesses were probed; and at the other end of the scale there was a thrilling accelerando during the development section that was hair-raising. The Adagio was solemnly spacious, the LPO’s strings richly communicative, but the conductor had no truck with being hidebound, achieving the climax through stealth. The scherzo was fiery, with meticulous dynamics and accents, and if the trio in the form of a Ländler was somewhat over-articulated, there was also an attractive earthiness to it. After which, Skrowaczewski was unable to disguise the holes this particular edit of the last movement suffers from, and maybe best not to try, but if it didn’t hang together it’s because it doesn’t, but it was suitably wild and reflective, the polka touched in with affection, and the blazing brass-saturated coda was life-affirming.

Having been absent for some time from London prior to October 2012, Skrowaczewski (still working a full schedule as well as composing) and the LPO have as then and now forged a positive and productive relationship based on mutual admiration and trust. Certainly this Bruckner 3 was as lively and rousing as it was deeply considered and old-school punctilious. It worked a treat! Hopefully, Skrowaczewski has future LPO dates in his diary.