A curiously balanced programme perhaps but one which compelled attention thanks to the inspired leadership of Osmo Vänskä.

Receiving its first UK outing, Magnus Lindberg’s latest utterance was co-commissioned by the New York Philharmonic (whose music director Alan Gilbert is a fan of this composer), the LPO and Casa da Música, Porto. The title is a sort of pun: the Italian expression al largo makes extra-musical reference to that ‘offshore’ moment when one reaches open sea and can no longer detect the coast. Hence Lindberg’s musical argument twice makes a transition from micro-managed bustle to infinite vastness without quite convincing as to the inevitability or point of the process, at least on a first hearing. The externals of a post-modern, transatlantic hit are there, not least a real sense of movement on multiple levels, the problem being that the lyrical ideas are archetypal suggestions of melody rather than the real thing while all those colliding fanfare gestures come across as curiously unmotivated. Although the composer’s characteristic surface dazzle is achieved with a smaller orchestra than he usually deploys, the quotations from Ravel’s Mother Goose and Schoenberg’s Verklärte Nacht serve mainly to remind us that there was a time when it was possible to construct music out of genuinely memorable material. The 24-minute Al largo is not thorny (as opposed to confusing) music for an audience and, difficult though it must be to prepare, the LPO players’ execution of it seemed exemplary under the guidance of their hyperactive, almost arachnoid maestro. 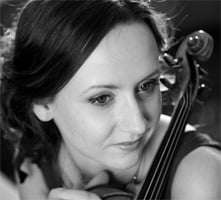 Winner of sundry prizes including a London Music Masters Award (earlier in the evening dozens of very young LMM violinists had delighted in their enthusiasm and skill), 25-year-old Agata Szymczewska made her UK concerto debut in the Mendelssohn, a technically assured but rather pale, under-inflected account, at its most distinctive when the soloist fined down her tone to a confidential whisper. The somewhat perplexing storm of applause which greeted her at the end and which even prompted a brief encore (by Grazyna Bacewicz) had nothing to do with either her fetching turquoise frock or the presence of a partisan Polish lobby, as one might have assumed. A large number of enthusiastic teens from the Teresa Carreño Youth Orchestra of Venezuela looked to have been offered the unsold seats.

William Walton’s First Symphony has had its ups and downs since André Previn’s sensational performances of the 1960s but by accident or design his most-recent LSO concert revival coincided with a general resurgence of interest in a score whose overtly Sibelian roots must intrigue Osmo Vänskä. From him the music did not stand on ceremony, constantly moving forward with impressive logic and rhythmic clarity. It was not so much that the tempos were overly swift, rather that Walton’s dramatic silences were kept short and snappy, the agogic rhetorical pointing favoured by Sir Colin Davis in this piece being rigorously eschewed until just before the end. So what if a few subtleties went missing in the process. The third movement, though suffused by the right kind of prematurely Mediterranean sweet-and-sour lyricism, brought a few minor slips, the baton discarded. Previn found more desolation and gravitas in 2005 if only because the LSO can make an even bigger, darker sound. The finale has its bombastic side but the intensity was wonderfully well sustained.

The audience, rather depleted after the Mendelssohn, listened attentively for the most part and responded warmly. Sadly at least two of its members were wielding mobile phones more or less throughout, one an amateur live-action photographer, the other an inveterate Twitterer. Eagle-eyed staff attempted to dissuade them from such activity but to little avail. The hall management’s piped warning is plainly no disincentive. Firmer action is called for. A life-time ban … or the birch. Music-making of such energy and drive deserves better.