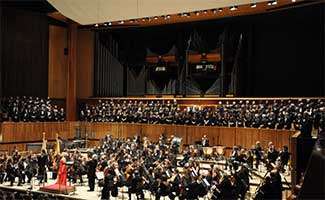 This was bold and imaginative programming: the sound of bells is deeply meaningful to the Russian psyche. Such musical adventures are always welcome. The first three works could well have presented a trio of premieres to any one listener, and not just because they were new to the UK (the Miaskovsky after 101 years, although this line-up would have graced the Edinburgh Festival mid-August but for a power cut just prior to the Usher Hall concert starting!). Such newness was certainly the case for your reviewer, an exciting prospect. 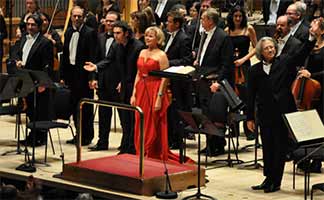 If the evening led to one of Rachmaninov’s masterpieces, it was The Bells (a ‘choral symphony’ setting Edgar Allan Poe’s poem as freely translated into Russian by Konstantin Balmont) that didn’t quite hit the heights as a performance. It was good, make no mistake, excellent in terms of choral singing and orchestral playing, but Vladimir Jurowski was a little removed from the music’s passion and transcendence. The “alarm bell” third movement was cautious; it is a wilder creation than given here. In what is effectively a birth to death piece the opening movement glinted but was not playful enough. Sergei Skorokhodov was an ardent and vernal tenor, but the combined chorus’s first appearance, a walloping fortissimo, suggested that 200-plus members, although an impressive wall of sound, was over-the-top in volume for this venue and also over-shadowed the orchestra time and again. In the finale’s funereal tread, led by an eloquent cor anglais solo from Sue Bohling, Vladimir Chernov (a photograph of him in the programme was about thirty years out of date!) proved rather lightweight, his baritone lacking an essential blackness for the most final of valedictions, although he was not without character. The final bars, a potential release of wondrous rapture, were emotionally earthbound for all the shapeliness and commitment on offer.

It must also be said that some of the disappointment is relative to a recent compact disc release of Evgeny Svetlanov conducting The Bells (the maestro’s very last act of music-making), which casts a particularly long shadow. However, with the golden wedding bells of the second movement, Tatiana Monogarova (singing from memory, the gents had scores) was quite wonderful in the loving and intense way she embraced and caressed the music. Very personal and very special, and those few in the audience that clapped immediately the movement finished were guilty of wrecking the aftermath of something magical. 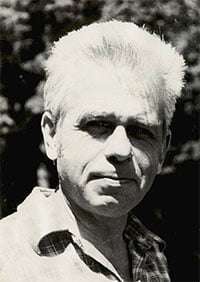 After the interval, preceding The Bells, came a piece by Edison Denisov (1929-96). Bells in the Fog (1988) proved rather too studied in its scales and plinks, and its haze and vapours – a sort of Impressionism (coincidentally, Denisov spent his last few years in France) –, a seeming preparation for something that never arrives, save the trombones’ storm in a teacup, although there were some attractive colours and timbres. At 12 minutes (four less than suggested) it was plenty long enough. 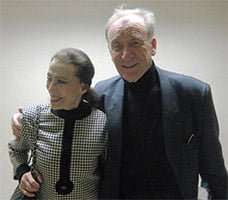 This was a no-expense-spared concert, the LPO at its fullest and most diverse (with ten double basses for Miaskovsky and Rachmaninov) as well as being thoroughly prepared and responsive. We began with Rodion Shchedrin’s The Chimes, first performed in January 1968 by its commissioners, the New York Philharmonic and Leonard Bernstein. Amazing that it has taken so long to reach the UK, London in particular, although Mikhail Pletnev has recorded it for Deutsche Grammophon. The programme warned us of a gunshot at the end of the piece. But why spoil the surprise? Those with a nervous disposition might well have avoided this concert anyway, and the clangour of the church bells (supplemented by the tubular and hand versions of the species) was altogether more disturbing. Shchedrin, who turns 80 in December, has certainly created a virtuoso showpiece, gratefully taken by the LPO, not least its four trumpeters, but the concerto aspect seems secondary to an unstated narrative. This is music that is sinister and brazen, eerie and tumultuous, occasionally suggestive of Lutosławski, catastrophe not far below the surface and sometimes splenetic in its exposure, a journey compellingly sustained over 12 minutes in both musical and dramatic thinking. But the advertised gunshot was feeble, the strings slithering downwards as a theatrical envoi in response.

The LPO was larger still for Silentium, an early work by Nikolai Miaskovsky (1881-1950), first heard in 1911 (presumably in St Petersburg) and only now reaching the UK. It’s no masterpiece but is certainly worth the occasional airing. Inspired by Poe’s “Silence: A Fable” – helpfully printed in the programme – the (here) 21 minutes passed rewardingly, beginning on lower strings subtly tinged by clarinet and bass clarinet and slinking into frosty life, desolation and struggling life hand in hand and, via madly trilling clarinets, reaching a battering climax. Stylistically Miaskovsky owes to Liszt and Scriabin, but anyone familiar with a selection of his 27 symphonies (hopefully Jurowski will give us No.25 one day) will recognise that Miaskovsky was already his ‘own man’ at this juvenile stage of his career. Silentium meanders somewhat and, if it neither fully gels nor blossoms, this performance proved a rewarding first meeting with a score that also issues an invitation to return to it. No recording (even if existing) appears available, so the LPO has the field to itself if the one made at this concert can be issued. Overall, this is a concert that the London Philharmonic can be proud of presenting.