How times change. Asked by Walter Legge back in the 1950s what he would like to conduct the following season, Jascha Horenstein replied “Mahler 6th”. “No” Legge is reputed to have replied, “that’s Box Office death. Choose anything else”. Legge should have been around now to see a Royal Festival Hall full to overflowing for this concert. The public’s appetite for Mahler, even his more intractable works, remains insatiable. 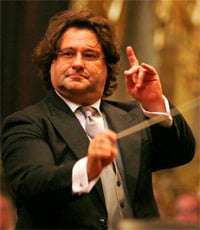 The concert was to have been conducted by Jaap van Zweden, appointed at 19 as the youngest-ever Concertmaster of the Concertgebouw Orchestra and now making a big name as Music Director of the Dallas Symphony. Unfortunately laid low, reportedly by Swine Flu, Zweden was replaced at very short notice by Johannes Wildner who is perhaps best-known for some recordings for Naxos.

It was to Wildner’s credit that he got the LPO through this massive symphony with security. However, orchestras now have this music in their psyches in a way that certainly was not the case when Mahler performances were rare events. There was much wrong with this account. First, there was the misguided decision to play the scherzo second and the Andante third (albeit van Zweden’s plan) – a canard dating from the period of Erwin Ratz’s editorship of the International Gustav Mahler Society and a decision repudiated by Ratz’s successor Reinhold Kubik. (Please see link below to Robert Matthew-Walker’s article on this subject.) Second, there were only two hammer-blows in the finale; musically it really needs the third to clinch the matter. Thirdly – and most importantly – at no point was there any sense of living dangerously. Mahler’s 6 is a ‘Life and Death’ experience, potentially shattering in its emotional impact. On this occasion it was as safe as mowing the lawn on a Sunday morning.

The first movement set out at a speed fractionally too fast to allow for important detail to register and, given that the general dynamic level was also too high, instead of a clear and menacing tramp towards the genuine climaxes the movement quickly degenerated into a generalised mush of sound. The exposition repeat was observed and the sound was a little more focussed. However, the cowbells, far from wafting us into the purer air of an Alpine meadow, sounded uncomfortably like crockery being hurled around the kitchen. Given Wildner’s dogged insistence on conducting every beat of every bar – surely the art of conducting is knowing what to conduct and more importantly what not to conduct – there was a lack of those symphonic tensions so that, for example, when the recapitulation finally arrived, instead of erupting it fell as flat as the proverbial pancake.

So, unfortunately, things continued with a scherzo lacking in delicacy, the music then losing its way in the thickets of the trio which dragged interminably due to the lack of an underlying pulse, and an Andante – beautifully played with an excellent first horn (John Ryan) – but utterly devoid of introspection. The opening should come as it were from another World whereas here everything was laid out in the full glare of the midday sun; with so much so soon, the soaring string climax at the close failed to ignite. That said there were some fine individual contributions along the way, notably Jaime Martín’s sensitive first flute and Sue Bohling’s equally charismatic cor anglais. Creditably the finale worked up a certain degree of energy, the LPO strings giving it their all, but this was hardly the seismic conclusion one might have hoped for (even the hammer-blows were less than earth-shattering).

Opening the concert Leonidas Kavakos gave an excellent account of Szymanowski’s brief and rarely performed Second Violin Concerto, his last major work and written in the rarefied air of Zakopane in the Tatra mountains to which Szymanowski had retreated in the hope of beating his persistent tuberculosis. Kavakos is exceptionally secure in intonation – something most notable in the extended cadenza – but does not have the largest or most penetrating sound, so on this occasion the bluesy opening and the work’s folk-like conclusion came off best. Between times, all-too-often the soloist was obscured by a blanket of orchestral sound which needed much greater finesse and restraint. Kavakos offered an encore, unaccompanied Bach.