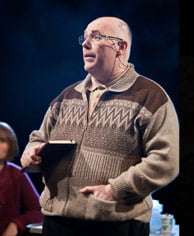 Playwright and screenwriter Alecky Blythe, Artistic Director of the Recorded Delivery Theatre Company, uses a verbatim technique to create plays which involves the use of journalistic interviews which are formed into a script that faithfully recreates the subjects’ words. The actors include any repetitions or mistakes or mispronunciations. It’s a technique devised by Anna Deavere Smith passed on to Blythe by Mark Wing-Davey in his workshop, Drama Without Paper. The work involves going into a community and recording what the residents have to say on any given subject. Previous plays by Blythe included interviewing people in Hackney on the 2003 siege for “Come Out Eli“, talking to prostitutes for “The Girlfriend Experience”, and meeting the elderly for “Cruising“, about old people looking for love and sex.

In the past Blythe’s actors have not been shown a finished text. The edited recordings of the conversations have been played to the performers through earphones both during rehearsals and performance so that the actors repeat exactly what they hear in the same cadences and rhythms of the original speech patterns “with every cough, stutter and hesitation” (Blythe). For “London Road”, however, Blythe has been working with composer Adam Cork. Setting some of the material to music has added another layer, parts of the conversations now sung. It proves to be a fascinating undertaking in “London Road” and if at first it seems stylised and artificial, it is a method that soon becomes absorbing and realistic. 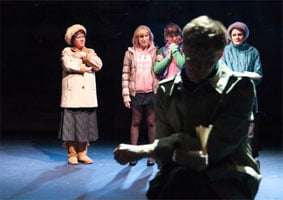 It is set in Ipswich – the redevelopment in 2000 of Portman Road, the home of Ipswich Town Football Club, involved the installation of CCTV cameras. The sex-workers in the area were forced to move onto London Road where the prostitution problem then escalated to such a degree that a Neighbourhood Watch scheme was re-formed. However, the bodies of five of the prostitutes were discovered in December 2006, the work of Steve Wright, a fork-lift driver. In an effort to wipe-out the prostitution problem a drug rehabilitation centre in Ipswich was given an anonymous donation in order to keep the girls off the streets. Although Wright was charged with the five murders and was remanded in custody, in May 2007 he pleaded not guilty. It was not until January 2008 that the trial began at Ipswich Crown Court. In the meantime members of the London Road community got on with their lives, arranging flower-shows, having Neighbourhood Watch quiz-nights and Christmas parties. Then the trial began and Blythe and Cork’s play documents the feelings of the locals as it brings back all the horrors of the events. Wright’s boarded-up house at 79 London Road becomes a sort of shrine, people wondering if that is where the prostitutes were murdered. Should the house have been demolished? As one local resident says, “I just would like it to be all over and just to know…” But others feel that the dead girls “are better off, ten foot under.”

Whether the flower competition is a way for locals to compensate for the horrors experienced, something pleasanter to take their minds off the murders, is never questioned but seems entirely possible, an endeavour that allows their community to be remembered for more than infamous murderers’ addresses such as 10 Rillington Place (the London home of John Christie) or 25 Cromwell Street, Gloucester, lived in by Fred and Rosemary West. The ordinariness of everyday conversation is well captured but, when spoken and sung to music, the lines are lifted above the banal and take on an almost poetic life. The repetition of phrases becomes quite catchy with a cumulative effect when set against a musical background that often imitates speech patterns. However, for such a ghastly chain of events there is an amazing amount of good humour and it seems wrong to find the dialogue as a source of comedy. The lives of the victims are not really examined, so the privacy of their families is respected. The object of the exercise, however, is to record the feelings of a local community and how it manages to heal itself. It was, after all, just as shocking for them as it for the families of the murdered girls. 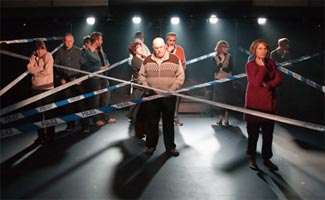 As the stage becomes covered in hanging baskets for the judging of the “London Road in Bloom” competition, our thoughts are taken away from the horrors and move to a better place where people can be congenial and welcome their friends with a cup of tea while celebrating plants growing, providing a colourful front-cloth that obscures the darkness of the other side of London Road. This is an ensemble piece with the company playing the residents, most of whom are members of the Neighbourhood Watch committee. Ron and Rosemary moved from Peckham to Ipswich for their retirement. Julie organises the Watch events and had the idea for a flower competition. Helen and Gordon are both retired teachers with Gordon playing in the band for Watch gatherings. Jan, a carer for the elderly, and her husband Tim are both committee members. Dodge, a window-cleaner, hosts the barbecue. Terry and June met each other late in life and share a love of line-dancing. Finally, Alfie, a former resident of London Road, who with his friend Terry was often the winner of the “Best Garden” competition.

Katrina Lindsay’s simple designs provide a pleasant backdrop to the grisly subject matter. Director Rufus Norris lets his cast speak for themselves, making the whole enterprise naturalistic rather than appearing to be a dramatised documentary. The cast play everything straight and has a feeling of improvisation, although it is patently not in the way that, say, Mike Leigh creates his plays through impromptu rehearsals. This is an astonishing piece that stays with you, laughs and all.