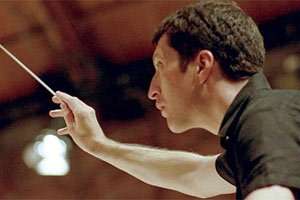 Fresh from his latest Adès/Reich double-bill, Thomas Adès directed the London Sinfonietta in an enterprising programme whose title was not at all fanciful. Harp was but one among equals with clarinet, cello and soprano in Luciano Berio’s Chamber Music (1953) – three settings of James Joyce whose motivic rigour testifies to its serial origins while its innate lyricism places it within a far older tradition of Italian vocal writing. Chastely rendered by Allison Bell, this un-conducted piece proved a welcome revival and an appropriate entrée.

Despite his significance in terms of Western music from the past half-century, Per Nørgård (80 next year) has had relatively little exposure in the UK, so it was a pleasure to encounter one of his recent major works. Effectively a second harp concerto (though not titled as such), Through Thorns (2004) continues his exploration of tonality in the most intimate terms. Pervaded by the contours of Marian chant, this 20-minute piece unfolds as a continuous ‘passage’ in which harp and an ensemble of flute, clarinet, string quartet and double bass outline a sequence of verse and commentaries toward a hymn-like apotheosis. And, though written with Danish virtuoso Tine Rehling in mind, Helen Tunstall sounded never less than assured in music whose profundity is wholly at one with its understatement.

Adès’s own contribution came immediately after the interval. Inspired by a painting of the nineteenth-century artist Daniel Maclise, The Origin of the Harp (1994) is an arresting instance when his music still retained a subversive potency. Although the harp of the title is not present as such, an ensemble of clarinets, violas and cellos in threes (and percussionist) conjures up its presence with increasing insistence towards the fraught close. Relatively passed over at its early appearances, this seems undoubtedly a piece with ‘staying power’.

Whether or not Feldman’s Sixpenny Editions (2009) by Gerald Barry proves likewise only time will tell. Taking its titular and conceptual cue from the editions of classical music ‘for home consumption’ of a century ago, the work’s eight movements (of varying degrees of brevity) embody their titles in always unpredictable ways – the composer’s trademark rhythmic unison writing much in evidence as musical eras and even specific composers are not so much parodied as affectionately undermined. Under Adès’s attentive direction, the Sinfonietta players gave of their virtuosic best – and not least pianist Huw Watkins in the almost Ivesian take-off of ‘Home Thoughts’ – but a sense that the sequence was no more, if indeed equal to the sum of its parts persisted through to the pertly equivocal conclusion.

Between these two pairs of works in either half, Tunde Jugede provided welcome contrast with music for the Kora – a North African instrument that resembles a larger member of the lute family, though which is played facing the performer and whose light yet precisely defined timbre is (oddly?) redolent of the Finnish kantele. With a legacy that goes back at least to the Middle Ages, the music seems as much extemporised as composed, but no less contrasted or distinctive because of it. Thus in the first half, the pensive Still Moment was followed by the more demonstrative Fountain of People’s Hope while, in the second half, a more extended overview of the instrument’s character was set out in Cycle of Reckoning. Played with quiet authority, this music seemed both effortlessly and enticingly in context.