“British Roots” was the rubric chosen for marketing purposes but at least two-thirds of this LSO programme reflected a previous age of anxiety and uprootedness, the even darker years associated with the onset and aftermath of the Second World War. There was a time when such music was seen to pose the aesthetic difficulties pinpointed by a celebrated 1950s record guide: “The biggest name in contemporary English music … Vaughan Williams is now a solitary figure, for his influence has served but to produce a steady trickle of pentatonic wish-wash. In this form British music is demonstratively less vulgar than the bad music of other countries, but it is more soporific…”. Thankfully attitudes have moved on as has the interpretative response. 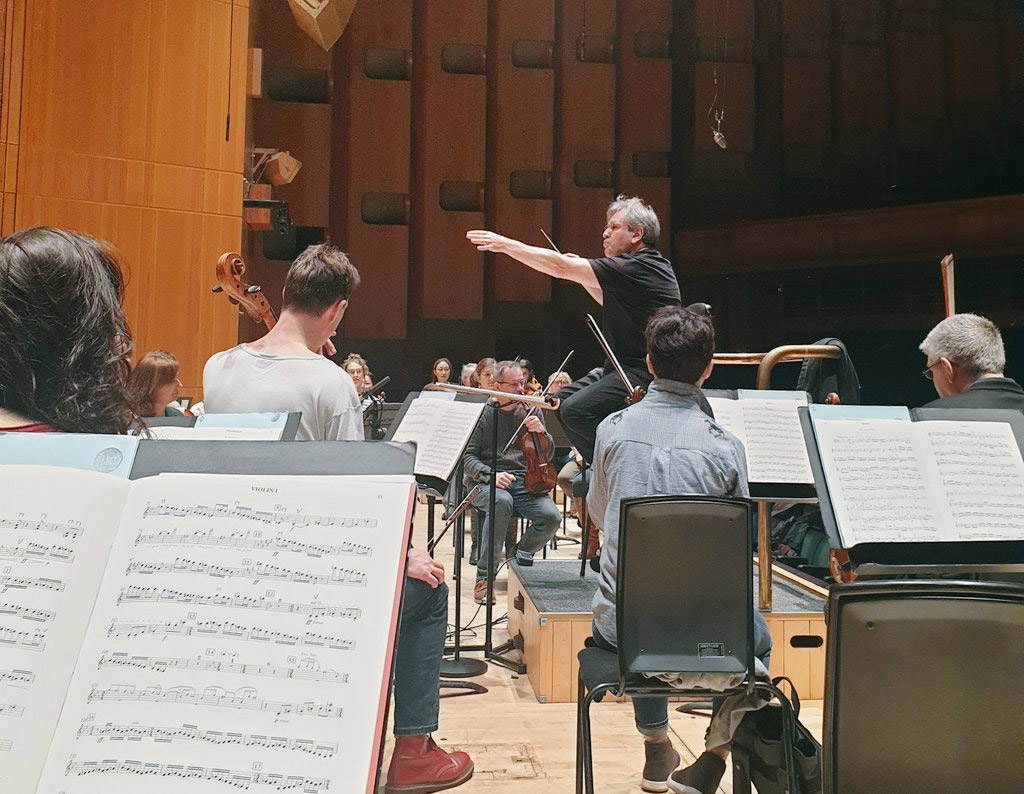 We began in any event with what was always one of Vaughan Williams’s greatest hits. The orchestra, joined by young players from the Guildhall School when Sir Simon Rattle scheduled it here in June 2019, produced a smooth, rich sonority on this occasion, belying the blunt acoustics of Hall. Perhaps your reviewer was lucky to be seated on the left of the stalls. The double-basses were congregated opposite, lending real heft to the sound as in the larger ecclesiastical enclosure the composer had in mind. With the main body of violins seated antiphonally throughout the evening, the smaller chamber orchestra of nine players required for the Tallis Fantasia was set back on the right. Consoling balm predominated at relatively spacious, natural-sounding tempos, save for the deep pocket of darkness Sir Antonio located just after the big climax, delivered incidentally without the particular wrenching fervour of Sir John Barbirolli’s famous Sixties LP, more faithful to the line as notated.

Vilde Frang’s rightly celebrated commercial recording of Benjamin Britten’s Violin Concerto arrived in 2016, and it remains a favourite work for her. Having turned-in an excellent performance here under Sakari Oramo in March 2018, this one was even more intense, combining dexterity and polish, not to mention impeccable intonation (it comes as no surprise to discover that Anne-Sophie Mutter was an early mentor), with a very vigorous response to expressive indicators. Frang has turned music that used to come over as an over-extended take on the Prokofiev concerto model into a bona fide masterpiece up there with the Shostakovich works she says she was often advised to play instead, at least at the beginning of her career. Pappano managed the difficult trick of eliciting full-blooded accompaniment without ever drowning her out. Whatever the work’s elements of English reserve, there was a shared determination not to undersell those passionate outbursts fuelled by the composer’s political and moral convictions during and after the Spanish Civil War. The sense of looming threat was ever present through to the equivocal close.

After the interval that threat was more tangible. Given the implacable rhythmic crackle of the same forces’ rendition of Vaughan Williams’s Fourth in December 2019, one expected a taut, white-hot Sixth. Sure enough, apart from the blossoming of the second subject near the end of the first movement (that luminous potential unusually present here even on its initial, modal appearance), there were few chinks of light. Esa-Pekka Salonen and the Philharmonia, who last January at Southbank Centre conceived the work as a yet more frantic rush to the abyss, jettisoned even more of the easy lolloping lilt others have found in it. Sir Antonio’s inner movements had an implacable force and the kind of vast dynamic range that doesn’t really work in the Barbican Centre’s Hall, save for music as intentionally battering and painful as this. An intimidating expressionistic roar may or may not have been the intended effect. Only the finale disappointed just a little. Was it André Previn who began the regrettable tendency to concretize its elusive wisps into purposeful argument? Even Pappano could be slightly too loud and slightly too ‘positive’ though his placing of the final chords was absolute perfection, the music finally, mesmerisingly, lost in space. “He saw it all” said Sir Adrian Boult. He had nuclear desolation in mind but we could pick our own frightening airborne metaphor.

After the closing ovation Pappano thanked an audience determined to show its loyalty to the “great institution” that is the London Symphony Orchestra. Bespectacled and using a baton in these orchestral outings, he remains a natural communicator. While the concert had sold well, turn-out was probably a third down on expectations. The players could scarcely have been more supportive, technically secure at all decibel levels.