Handel
Alcina – Opera in three Acts to an anonymous libretto after an episode in Ariosto’s Orlando furioso [sung in Italian, with English surtitles] 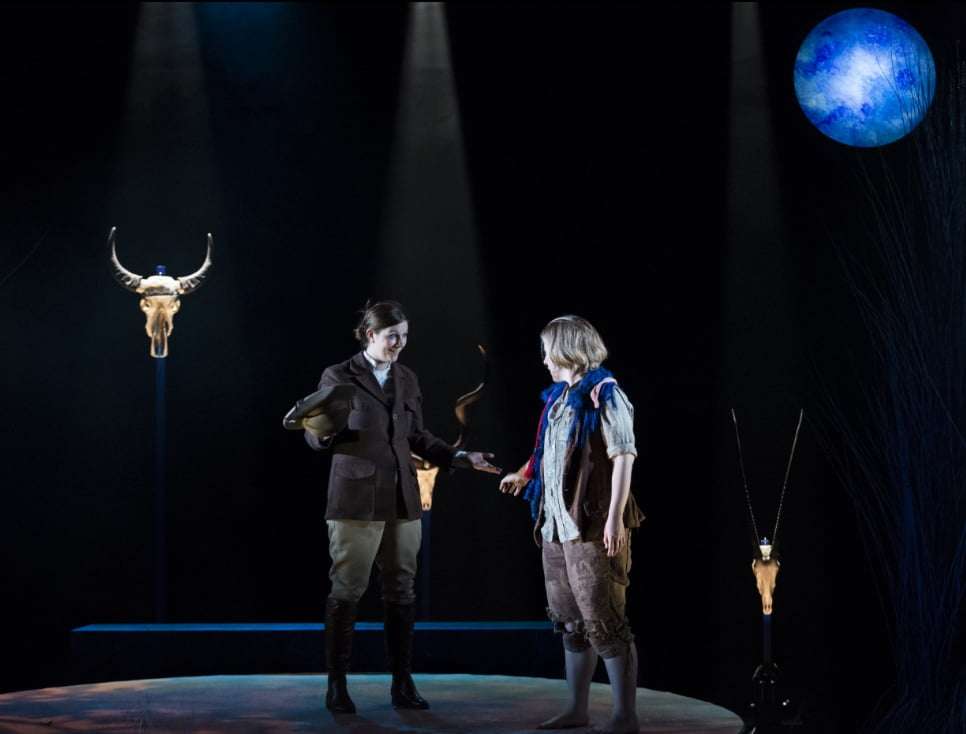 Longborough Festival has eschewed the 400th-anniversary Shakespeare celebrations this year, at least explicitly, but the choice of Handel’s Alcina and Jenny Miller’s realisation of it make intriguing references to the Bard’s work. Although Handel’s opera is based on an episode from Ariosto, its setting on a wild island amidst the sorcery of its central character must bring to mind The Tempest, albeit Alcina does not voluntarily abjure her rough magic like Prospero, but has it wrested from her.

Miller’s production takes inspiration from the interface between wildness and civilisation, as Bradamante and Melisso come to Alcina’s magic island to reclaim the former’s beloved Ruggiero from the wiles of the sorceress and her sister Morgana. Faye Bradley’s designs suggest that with the sisters’ more exotic dress, as opposed to the (anachronistically paired) attire of the visitors, with Bradamante (disguised as her own brother Ricciardo) in a deerstalker and Melisso in a 19th-century style suit, cravat, and boots. 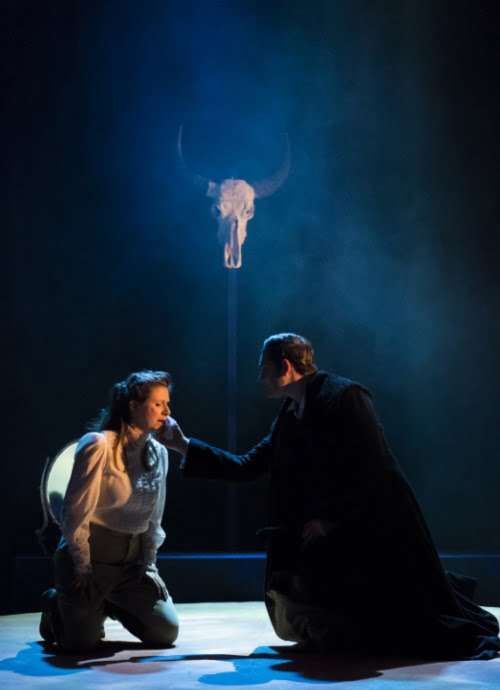 Lured by Alcina’s specious charms, Ruggiero has self-indulgently forgotten his earlier vows to Bradamante, though the steadiness and control of Hanna-Liisa Kirchin’s singing hinted at the essential constancy within the character’s core, summed up best by Kirchin in her sensitive delivery of ‘Milusingail dolce affetto’, questioning the reality of Alcina’s sexual and emotional appeal. Ruggiero’s temporary abandonment of duty recalls the waywardness of Shakespeare’s Antony. If so, then Alcina’s sensuality and allurements parallel Cleopatra’s, and Iras’s words in that play “the bright day is done, and we are for the dark” could be taken as a source for Miller’s nocturnal setting, which establishes the dubious, deceptive atmosphere of the island, with a full moon behind the tree branches sinisterly changing colour.

Haunting this landscape were the horned creatures into which Alcina has turned her former lovers, presumably representing both sexual potency and cuckoldry, as well as evoking the trick which the Merry Wives of Windsor play upon Falstaff in that play when he appears as Herne the Hunter in Windsor Forest. Miller’s interpretation pulls the threads of Handel’s drama in a satisfying and effective manner, and it is an inspired gesture also to bring in the orchestra as a role in itself. They instrumentalists wear horns too, and the continuo section (bar the harpsichordist) is placed up on the side of the stage such that, whilst Alcina lavishly banquets near the opening of Act One, they comprise a part of the opulent entertainment. Gavin Kibble also provided enticing interaction with Morgana in his solo on the viola da gamba for her aria ‘Credete al mio dolore’.

Cohering with equal success was the cast of young singers. Julia Sitkovetsky impressively explored the various facets of Alcina’s character, not just her lurid charm as a man-eater, and showed an astute grasp of the vulnerability lying beneath in her great of aria of self-reflection, ‘Ah! Mio cor’. As Morgana Lucy Hall revealed further coquetry with the brightness of her florid musical lines, though she also plumbed real depths of feeling in her later aria where she protests her love to Oronte after flirting with ‘Ricciardo’. 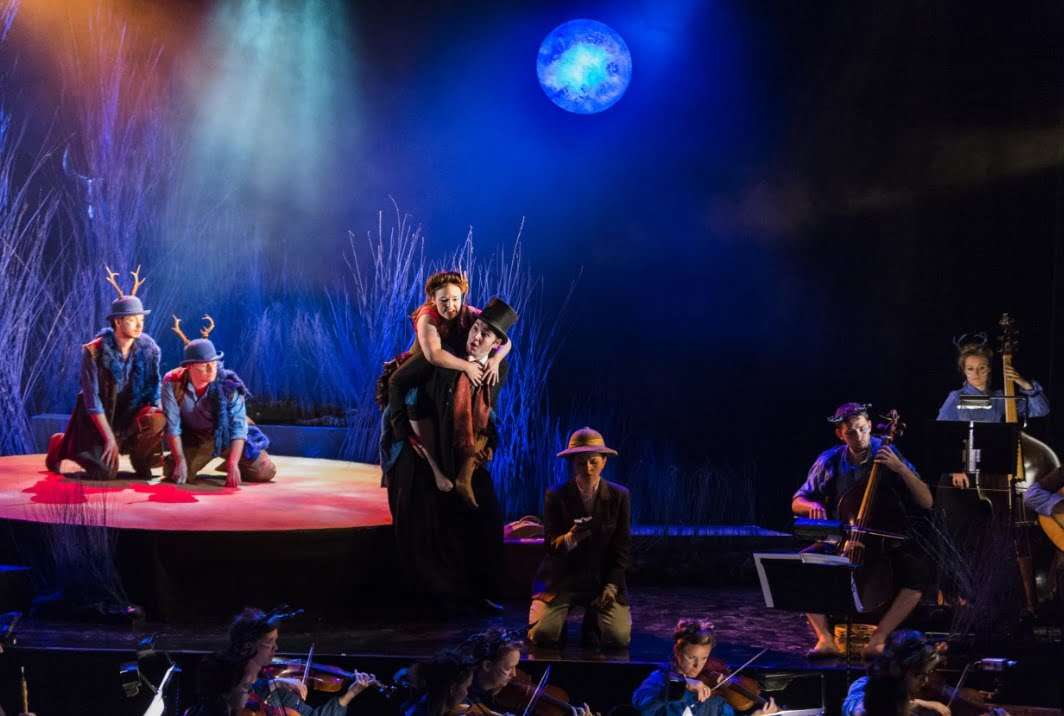 Anna Harvey gave a generally restrained account of the latter role – Bradamante in disguise – and therefore developing a sense of fidelity and dependability as against Alcina’s whimsicality. Her desire for revenge against the sorceress told all the more, then, in the passion reserved for the aria in which Harvey expressed that impulsively.

Christopher Diffey played Oronte, Morgana’s put-upon lover, sympathetically with singing that was soft-grained though not always securely placed. Although only given one aria in this edited account of the opera, Rosie Lomas stood out for her sparkling rendition of Oberto’s coloratura aria in Act Three, the boy searching for his father who has been turned into a beast by Alcina.

A number of other arias are also cut, including Ruggiero’s ‘La bocca vaga’, and though it made the dramatic pace of the staging more swift, it was a little difficult following the entangled romantic interests of the characters in their confused motivations and understanding.

Given that tighter presentation, and an orchestra of only a dozen members (plus two horns for Ruggiero’s one triumphant aria in Act Three) it was surprising that the reading of the score under Jeremy Silver was not more nimble. It did not drag, but some arias were measured where more urgency might have been expected, such as Bradamante’s reflection upon jealousy in Act One, her expression of revenge later on, or in ‘Tornami a vagheggiar’ (given here to Morgana rather than Alcina as on some occasions). 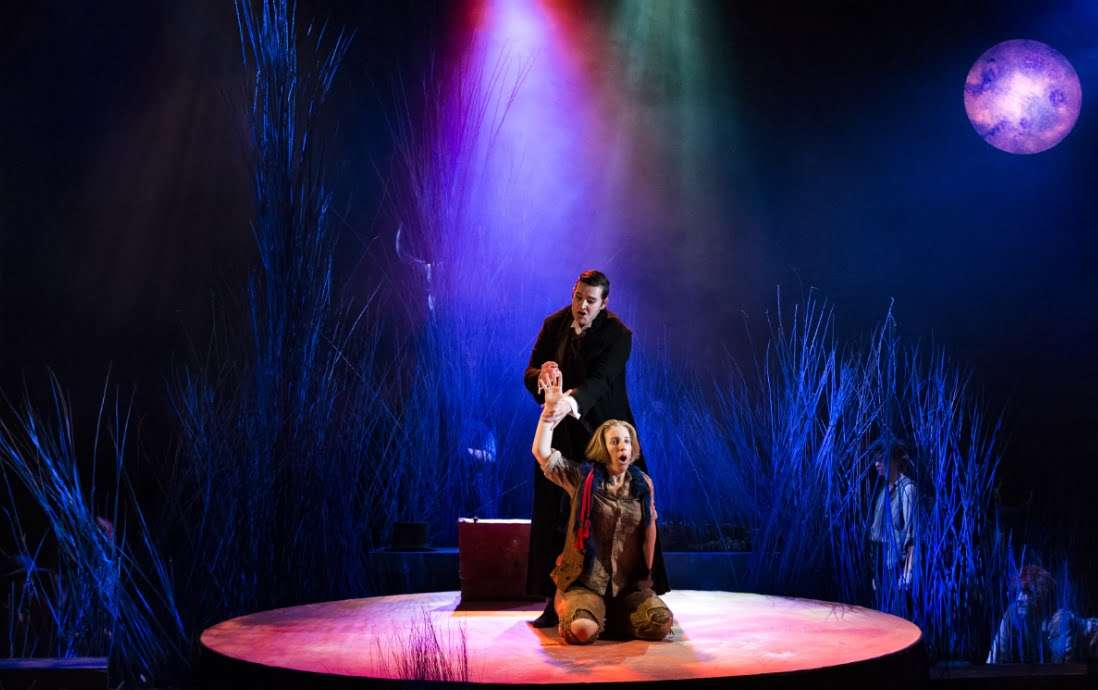 Apart from that, there is no intrinsic fault, the staging intimate and elegantly despatched. So too the choreography created by Michael Spenceley, which took its part as one of the spectacles to delight the senses: the dance gestures enhanced Handel’s music by falling in place rhythmically with it and were not an intrusion upon the drama.

On the whole, then, this is a very satisfying account of one of Handel’s greatest works for the stage, brought to life by a directorial team who understand this composer and who have made imaginative use of the conventions of opera seria which can otherwise seem strange and static. Handelians will be impressed, and sceptics may be won round by the more durable magical charms of Handel’s music in such a dramatisation.