John Adams
The Gospel According to the Other Mary [Barbican Centre co-commission: European premiere] 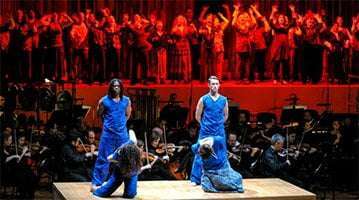 As its centrepiece, the Los Angeles Philharmonic’s residency at London’s Barbican Centre brought the European premiere of John Adams and Peter Sellars’s latest collaboration, The Gospel According to the Other Mary. Although the programme information didn’t tell us this, Dudamel’s forces (one of the co-commissioners) first performed the score at home, the Walt Disney Concert Hall, on 31 May last year. That, however, was a concert performance. The premiere of Sellars’s staging was on 7 March just gone, before 250 Angelenos decamped to London for this extraordinary performance, before heading further into Europe with it. 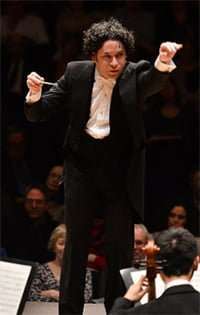 Without doubt, all this effort is worth it. The six commissioners have been well-rewarded in this musically gripping drama, melding modern themes (particularly about womanhood) with a partially oblique retelling of Christ’s Passion. Perhaps the title should rather have been ‘The Passion According to the Other Mary’, for only one earlier tale from the Gospels is included – the rising of Lazarus from the dead, which is the focus of the work’s first half. As such it is the corollary of El Niño, topping and tailing the life of Christ from birth to resurrection. But Adams has surpassed himself in sounding the 21st-century in all its vivid variety – using (for the first time?) the cimbalom – and unfurling a seamless two hours and more of engrossing, immediately arresting and memorable music.

Sellars’s conception sees events from ‘the other’ Mary’s viewpoint, with Jesus not portrayed vocally, but glossed by three countertenors. As to who the other Mary is may be a moot point. Sellars follows the Western Christian tradition of equating Mary of Magdala (Mary Magdalene) with Mary, sister of Martha and Lazarus, from Bethany, but the four Gospels are not so clear. Indeed there are four who go by the name of Mary – not just the ‘Virgin’ and Magdalene, but also the mother of James and Joseph (indeed Matthew 27:61 implies that Mary the mother of James and Joseph is ‘the other Mary’) and Mary of Bethany. 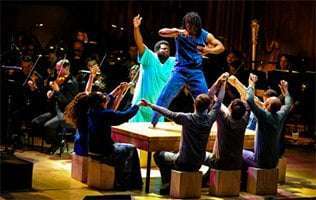 After an opening modern parallel of women arrested for drug offences, strip-searched and imprisoned, to the anguished ‘Howl ye’ from the members of the Los Angeles Chorale (in their loosely fitting, almost tie-dye, costumes on the high cliff top raised behind the orchestra), we are transported to Bethany, where Martha (Tamara Mumford) is angry at her sister Mary (Kelley O’Connor), complaining to Jesus that she doesn’t help with the housework. Jesus, in the reporting of our band of three countertenors (dressed in light-coloured (faintly camouflaged) flowing slacks and T-shirts emblazoned with similar but different circular and intricate logos, tells Martha that Mary is doing her own work for him. But Martha is even more anguished when their brother Lazarus is dying, but Jesus does not arrive until after Lazarus’s death. Miraculously, when he does, two weeks later, he raises Lazarus from the dead, marking an early climax in the stand-out aria for Lazarus: ‘For the Grave cannot praise Thee, death cannot celebrate Thee’ marks the score’s ‘Batter My Heart’ (from Doctor Atomic) moment – exquisitely lyrical and overwhelmingly moving. Martha is ashamed. The final scene of the first part is Passover, leaving the second part for the Passion proper.

Sellars has interpolated into the biblical texts he has compiled an assortment from as various sources as Hildegard of Bingen, Mexican poet Rosario Castellanos, Italian writer Primo Levi, American social activist and leader of the Catholic Worker Movement, Dorothy Day, and poets June Jordan and Louise Erdrich (accompanying Mary washing Jesus’s feet), but their inclusion seems totally organic and heightens the telling of the tale. Sellars’s constrained production includes two small stages in front of the orchestra, one in front of the first violins, the other – akin to a king-size bed – in front of the antiphonal seconds. Yes, trademark Sellars hand-gestures were plentiful, but didn’t overpower the action, nor did the three dancers.

After the interval, I thought Russell Thomas was going to take over as Jesus – although for most of the time he had to stand (acting as if the persecuted Jesus) on his own on the ‘bed’, while the countertenor threesome continued its evangelist role. Thomas did get his chance to shine in the second half. Here we join the post-Passover meal with the raid by the police, after which the women are arrested, with analogies to 2,000 years’ worth of female oppression, although they are released to watch the crucifixion on Golgotha and witness Jesus’s final night. In the morning, the burial is equated to spring, and the final scene, at first light, is when the earthquake rolls the stone from Jesus’s resting place and Adams’s music describes Mary’s recognition that Jesus has been resurrected when he repeats her name three times. From the stabbing beginning to this pregnant, hushed but all-encompassing ending, with harp and cimbalom colouring the final pages, Adams’s score continually caressed the ear and impressed the mind.

The Los Angeles Philharmonic and all concerned were magnificent, and standing in the midst of it all, Gustavo Dudamel, his conducting clear, concise and impeccable, fashioning a performance that could not have been bettered.