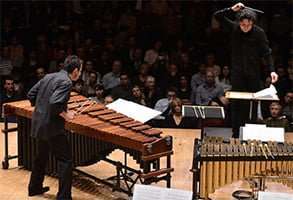 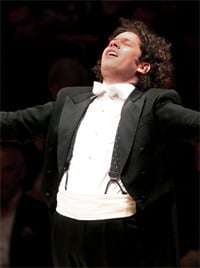 Perhaps the unfamiliarity of the first programme of the Los Angeles Philharmonic’s three-night Barbican Centre residency was too much for some – even with John Adams in person and the world’s hottest conducting property on the podium, there were seats to spare – but in scheduling such a programme, the LA musicians and their music director Gustavo Dudamel demonstrated the kind of bravery few other world-class orchestras posses. This was a taste of the LA Phil’s Green Umbrella series of concerts, headed by Adams, and its New Music Group tackled three widely contrasting works with terrific assurance, bringing chilly London a tantalising slice of LA’s contemporary-music scene.

John Adams’s Son of Chamber Symphony is a sequel of sorts. Its 1992 predecessor marked something of a departure from the pulsating textures and flowing structures of Adams’s 1980s’ heyday. Its successor continues the train of brittle musical logic, but while its clever title (redolent of 1950s’ B-movies of the nuclear age) suggests we should expect some sort of bratty offspring, the piece is calmer than the original and less prone to flailing and excitable gestures. The small-orchestra scoring picks instruments from most departments, adding piano, celesta and synthesiser, and keeps the strings to one of each variety. If the first movement threatens to run on aimlessly, the second and third are more concentrated and quite brilliantly executed. A large part of their subtlety and sparkle was lost in the large space of the Barbican hall, but it was clear that the ensemble, under the composer’s direction, was quite able to keep hold of their tangled musical lines. 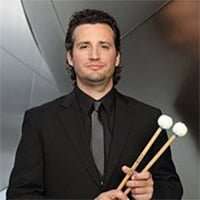 Then LA Phil’s timpanist Joseph Pereira swapped upstage for downstage as the soloist in his own Concerto, helmed by Dudamel. If Pereira’s piece trades-in effects and static structures, it does at least deliver a spectacular demonstration of virtuosic marimba-playing, graded all the way from barely-audible to restlessly inventive. Also intriguing is Pereira’s use of his orchestra which, until its final cry, largely eschews the melodic potential of its instruments, echoing instead the short-lived percussive sounds. Ultimately, though, it was Pereira’s dazzling masterclass in hitting things that remained in the mind.

The highlight of the evening was Unsuk Chin’s Graffiti, a piece loosely inspired by the beauty and banality of street art. According to the composer, Graffiti isn’t a literal musical translation of spray-painted words and pictures but an exploration of “the dialectic between primitivism and refinement”. It would, I think, take a few more hearings to untangle the basic and complex in her piece, but it offers flowing logic and prodding wit, seeming to be, in part, a portrait of a hectic city. The evidence is there: the second movement – ‘Nocturno urbano’ – teases a creepingly dramatic build-up from the orchestra, like some vaguely threatening night-time scene, and there’s a pretty obvious depiction of a train in the first movement. She works in a passacaglia last movement, its ground bass coalesces as the piece reaches its climax, only for the music to melt away in a gesture that typifies the composer’s effortless skill with her material. Dudamel and his LA musicians executed Unsuk Chin’s demands with brilliant precision, demonstrating what fine friends to new music they are.