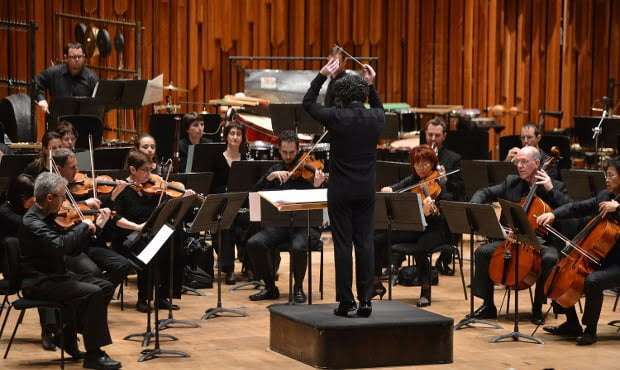 Preceding evening-length works from Messiaen and Mahler, the Los Angeles Philharmonic began its Barbican Centre residency with this concert of American music – juxtaposing new, recent, revived and classic works in a programme that played to this orchestra’s strengths.

The recent piece was Soundings (2003) by John Williams. Written to mark the inauguration of Walt Disney Concert Hall, this compact ‘concerto for orchestra’ unfolds as five continuous sections each focussing on a specific instrumental section prior to the celebratory close. The full forces were utilised (such as offstage woodwinds in the ethereal third section), and if this is music notable more for its technical finesse than intrinsic substance, it reminded one that the most successful living film composer is no less adept in a more abstract domain.

Certainly it has a conclusive quality – compared to which Andrew Norman’s Play: Level 1 (2013) felt provisional for all its often headlong activity; though this will likely be put into perspective when the three-movement totality is heard (the LA Phil has scheduled it for next season). For now, this first section proceeds as through a labyrinth where the abundance of foreground detail only belatedly clears to suggest a slower burning formal trajectory which presumably takes precedence in what follows. That said, the present piece makes engaging listening on its own terms – further evidence that Norman, whatever the talk of him being a ‘one trick pony’, is a resourceful figure and most likely of his contemporaries to find a way out of the post-minimalist malaise to have beset American music this past quarter-century.

This was not a consideration half a century earlier when Alberto Ginastera penned his First Piano Concerto (1961). One of the major works of his transition from Argentinean nationalism to a broader based and often expressionist idiom, its extremes find accord in the virtuosity of piano and orchestra contributions. Sergio Tiempo proved a worthy exponent of the former, maintaining a keen momentum throughout the opening ‘Cadenza e varianti’ and then dispatching the ‘Scherzo allucinante’ with acute poise. His rapport with Gustavo Dudamel was to the fore in the meditative stillness of the ‘Adagissimo’ while the ‘Toccata concertata’, made (in)famous by prog-rock band Emerson, Lake and Palmer in a version that won the composer’s unstinting approval, made for a conclusion of exhilarating verve.

Ginastera’s output will hopefully enjoy widespread revival in this his centenary year, though it is unlikely any of his works will ever enjoy the success of Aaron Copland’s Appalachian Spring – the Suite (1945) from which ended the concert in a mood of relative calm. Dudamel steered a secure course over these evocations of American domesticity, his incisive approach a little inflexible in introspective sections but with the ‘Simple Gifts’ sequence building to a forceful climax prior to the closing section whose detachment did not preclude a degree of tenderness. The Los Angeles Philharmonic evinced impressive unanimity if at times a little unyielding in overt passages.

By way of an encore, the ‘love scene’ from Bernard Herrmann’s score to Alfred Hitchcock’s Vertigo (1958) enabled the strings to come into their own in what was a sure highlight of the evening.