Andrew Norman – American, 40, trained at Yale and Southern California – has been championed by the Los Angeles Philharmonic for nearly a decade, and his music is steadily making its way this side of the Atlantic. The American fixation on hypnotic minimalism does not figure in his music, and on the evidence of this European premiere of his big, 32-minute Sustain, first heard in 2018 and already recorded, his style slides easily from ambient impressionism, much in love with timbre and sonority – an obviously good fit for the virtuoso, well-nourished LA Phil sound – to a vestigial but effective framing structure that binds and defines his material. 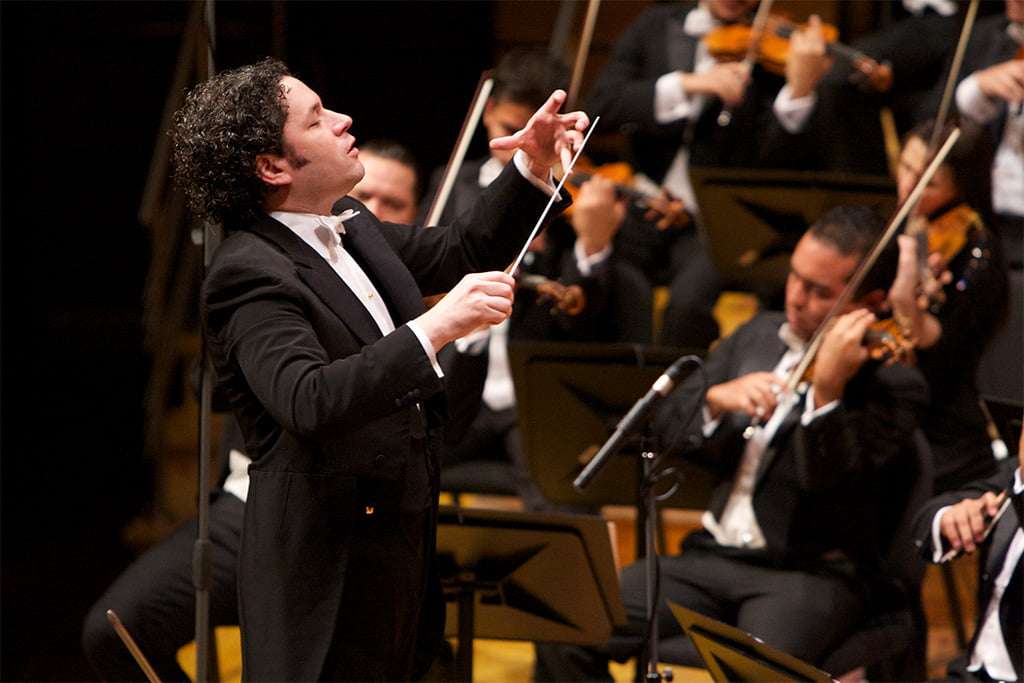 In Sustain, Norman has taken on Time, no less, on a scale unknowable to mere mortals, and how it shapes our relationship to the planet where we spend so little time. Predictably, the overall mood is remote and melancholy, delivered by some luxurious orchestration, including ten double-basses and two antiphonal concert grands microtonally out of tune with each other. The pianos expands on a refrain that gives the piece its shape, and the instrumental hierarchy is led by a keening, layered string sheen that could almost leak into a Mantovani-like cascading sweetness from many years ago. The score gathers, ruminates and dissolves, then repeats the gist of it as fragmentation and retreat take over. Sustain abandons sound at the close as we watch the LA Phil string players silently air-bowing. Is it a soundtrack to an imagined apocalyptic eco-film? Is it an essay in elemental decay? Sustain certainly needs the composer’s programme note to answer these and other questions, and while it certainly had style, it didn’t have a voice. The orchestra clearly knew it well – perhaps that was why it came in 13 minutes shorter than the advertised 45 minutes? – and Gustavo Dudamel directed its strong visual suggestiveness with a painterly ear.

Dudamel and the LA Phil rounded off their three-day Barbican residency with another time-bender, Anton Bruckner’s Fourth Symphony. The publicity material described it as ‘monumental’, which, for all its bigger rhetorical moments, it really isn’t. Dudamel obviously thought otherwise in his blockbuster approach to the first movement, in an overlit and coarse account that signalled a big gap between German pastoral romanticism and a can-do West Coast positivism. It also suggested that Dudamel and the forward Barbican acoustic were out of sync. The big moments were pulverising, which rather unpicked what Andrew Bain’s subtle opening horn-call was proposing.

Dudamel was conducting from memory, and he backed off into a redemptive and ravishingly played account of the Andante, Bruckner at his most intimate, at a pace verging on the fragile and kept in order by the strings’ discreet pizzicatos, letting the big moment of glory subside memorably to return the movement to its overall quiet bleakness for the close. The hunting Scherzo was big, bright and technically impressive, although I again wondered why Bruckner thought that his short and charming Trio needed such brashly coloured heavy lifting wings to keep it airborne. For a while it seemed that Dudamel had got the finale’s balance between the episodic and organic right, but, as in many a performance of this difficult movement, the music started chasing its own tail about two-thirds of the way through. Dudamel, though, did seize the reins and a megaphone for a gripping and loud conclusion.