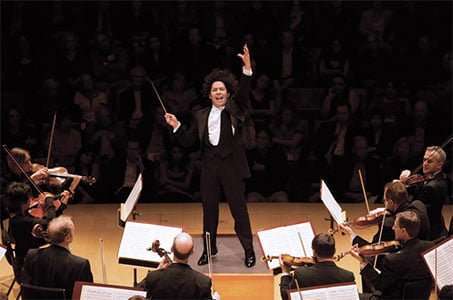 Gustavo Dudamel’s impressive achievements in his five years as music director of the Los Angeles Philharmonic were evident here. The orchestra was vibrant, sumptuous and resplendent, Dudamel in command, the musicians following his nuanced direction attentively, even when he drove them forcefully to velocities that could cause hiatuses with a less-talented ensemble.

The first half of the program consisted of John Corigliano’s First Symphony, composed in 1988 to express his “feelings of loss, anger and frustration” over the tragic death of friends and colleagues from the AIDS virus. The first, ‘Apologue: Of Rage and Remembrance’, is of enormous orchestral explosions and moments of near-silence tinged with string tremolandos, the former expressing outrage, the latter “bittersweet nostalgia”. Dudamel brought out the strong contrasts between volcanic eruptions and almost-inaudible tones that constitute the principal elements in the Symphony’s overall structure. Rocketing timpani strokes (“a kind of musical heartbeat”) propel the music into tumultuous outbursts of dissonance that are riveting. After the catastrophe dies down, if to be continued, an offstage piano is heard in Albéniz’s Tango in D (the second piece of his Opus 165), as transcribed by Leopold Godowsky, a favorite piece of one of the composer’s friends. The second movement is a tarantella, a wild dance, with a mysterious aura, which gradually becomes overwhelmingly raucous, finally seeming to go mad, suggesting the mental collapse of another friend. A terrifying scream shatters the air. A chaconne entitled ‘Giulio’s Song’ forms the third movement, which recalls a college-chum with whom Corigliano played cello duets. Robert de Maine and Ben Hong brought soulful expression to this dialogue. Quiet bell chimes imply that the end is close. A solo trumpet sounds the opening A of the Symphony. It grows to overwhelming proportions as other brass instruments take it up, building an enormous climax, as there will be for the insistent funeral-march rhythm that then enters. The finale functions as an epilogue, reminiscing previous ideas. The Symphony was given a powerful and sensitive performance, appropriate to the work’s pain and devastation.

Tchaikovsky’s Fifth followed intermission. Dudamel began in traditional fashion, a few ritardandos and some slight pressure on the pace of the Allegro theme remaining well within bounds. Woodwind solos were exquisite, brass was magnificent without overpowering the rest of the orchestra; and strings played with rhapsodic expressivity. The horn solo that opened the second-movement Andante cantabile – beautifully played by Andrew Bain – had a rather somber, almost forlorn quality. Even the overly aggressive approach to the gorgeous second theme worked within Dudamel’s fervent reading. All the grand sweep and heart-rending emotion of this passionate demonstration were laid bare with feverish insistence. Increasing might impelled the music forward. Brass threatened to bury strings during the huge climax. A rather long-lined closing section stretched out the first theme far beyond the tempo set by the composer. A brisk waltz followed and was graced with nicely shaped arching phrases. However, the stopped horns sounded rather raw and too exposed. Emphasis on the brass increased measurably. Dudamel occasionally stopped beating time, simply swaying to the music, the orchestra showing how steady its playing can be. The finale started in a resolute march tempo, leading into a vigorous, almost overwrought Allegro. Dudamel hurried the pace to such an extent that the music became maddeningly frenetic. Cacophonous brass blared over strings and woodwinds without mercy, and became ear-splitting. Although the return of the march theme is marked Moderato assai e molto maestoso, Dudamel took this glorious reprise excessively fast. The conclusion was so hard-driven that it is remarkable that the orchestra stayed together to the finish.