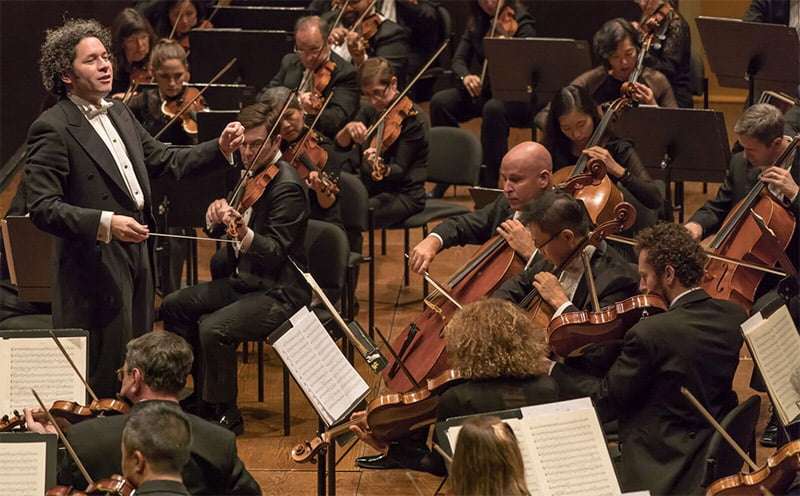 Gustavo Dudamel and the Los Angeles Philharmonic opened the first of two Lincoln Center concerts with Esa-Pekka Salonen’s Pollux, written this year as the first composition based on the myth of the brothers Castor (a mortal) and Pollux (immortal, fathered by Zeus). Musically Pollux is dark and sluggish, whereas Castor is to be outgoing and energetic, the pieces sharing motifs. Pollux is haunted by a mantra-like rhythm taken from a slowed-down version of a “post-grunge” band tune that Salonen heard and he was also inspired by the first lines of Rilke’s Sonnets of Orpheus. Much of this twelve-minute piece concentrates on Pollux’s introverted character, only occasionally bursting out as if rebelling against confines. A misty ambiance is tinted by xylophone and glockenspiel, punctuated by pounding drumbeats, then a chorale builds to a huge climax, and an English horn solo brings the journey homeward, ending simply. Dudamel capably maintained clarity while taking a steady, if sometimes formalistic, approach to elemental rhythms and somewhat dull melodic material.

Edgard Varèse found his true identity with Amériques, the first piece he wrote after moving from France to New York in 1915, performed here in the scaled-down 1929 re-scoring. With its fascinating burst of colors, cascading sound-patterns, explosive interjections, whirling rhythms and thrusting motions, Amériques was far ahead of its time. Various elements are fashioned like multi-layered blocks juxtaposed against one another, finally coalescing into an expansive, synthetic whole. Dudamel reinforced strong dynamic contrasts to lead an electrifying account, and he infused Shostakovich’s Fifth Symphony with an extra measure of speed and raw power.

The strings played the iambic dotted rhythms of the opening a bit too stiffly, which detracted from its thrust, but in the development the pace quickened progressively until by the enormous climax the tempo raced haphazardly. Dudamel gave a forceful if heavy-handed Scherzo, during which the violins’ pizzicatos, although marked only piano, were barely audible, and a legato treatment of the brass writing is unsuited to its character. The soulful Largo featured haunting flute and clarinet solos, Dudamel holding the tempo steadily, allowing intensity to grow gradually; and, in the Finale, ignoring the Allegro non troppo marking, he set a brisk tempo from the start and pressed further forward into a full gallop, thus the calmer, more reflective section was made too extreme. In the coda the brass was resilient and often overpowering, pounding timpani adding assertiveness. As an encore, the ‘Liebestod’ from Tristan und Isolde was a strange choice to follow the Shostakovich.