Loserville
A musical with book, music and lyrics by Elliot Davis & James Bourne 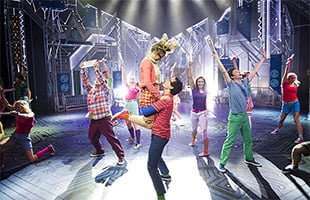 It’s not often these days that we get new home-grown British musicals in London. Soho Cinders, an updating of an age-old story, brightened up the West End earlier this year, and Once Upon a Time at the Adelphi, about the hotel in Liverpool, was one of the best musicals to hit town in 2010. Elliot Davis was connected with both productions. His latest venture is Loserville, co-written with James Bourne, former leading light of the boy-band Busted. Loserville uses some of the songs from his 2005 album Welcome to Loserville recorded by another Bourne band, Son of Dork. The result is quite unlike the Cinders and Adelphi shows.

Loserville screams youth from beginning to end but is far away from, say, Grease or even High School Musical. If you love Glee you’ll love Loserville. I won’t vote for either. The plot concerns US high school nerds in their effort to invent a way of getting computers to talk to each other. Set in 1971, with the origins of email in place, according to this show, it is these kids what done it – allegedly Michael Dork (well-named) and his brainy but beautiful squeeze Holly Manson (who wants to be the first woman in space), who manage to couple computers electronically. 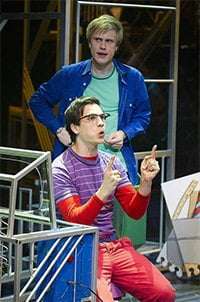 They are not helped by rich-kid and bad-boy Eddie Arch who tries to pinch their idea to impress his father who is head of a global computer firm. The wizard nerds win in the end but not before going through the teenage angst that involve dating (getting or not the girl) and fashion statements (you have to dress badly if you’re a nerd) before finding success as a geek in a garage inventing something to change the world.

There’s a cartoonish air about the show, from the candyfloss music and lollipop lyrics to the brilliant designs cleverly based on spiral notepads and pencils. It certainly looks like a lot of fun but the deafening music is both out there and upfront, but the predominantly teenage audience was having a ball.

The show is noisy, colourful and goes off bang like a firework display. The choreography is heppy, peppy and pat with high-speed dancing and acrobatics. But, will the kids remember the songs by the time they get home? I certainly didn’t. It’s a good ensemble although there’s a little too much mugging afoot in the acting stakes. Aaron Sidwell is fine as Michael Dork, Eliza Hope Bennett handles Holly, the brainy dame with the specs, with credibility, and there’s good support from their other geeky friends, Francis (Lil’ Chris), Lucas (Richard Lowe) and Marvin (Daniel Buckley). Stewart Clarke as mean Eddie gets a deal of attention when he flashes his six-pack, and Ashley Luke Lloyd opens Act Two clad in silver as a Bowie-type pop icon, one Alvin Starburst. The band under Jim Henson is loud throughout, belying the fact that there are only a few of them. Some you win, some you lose…