L’Ospedale
Opera in one Act by an anonymous composer to a libretto by Antonio Abati [sung in Italian, with English surtitles] 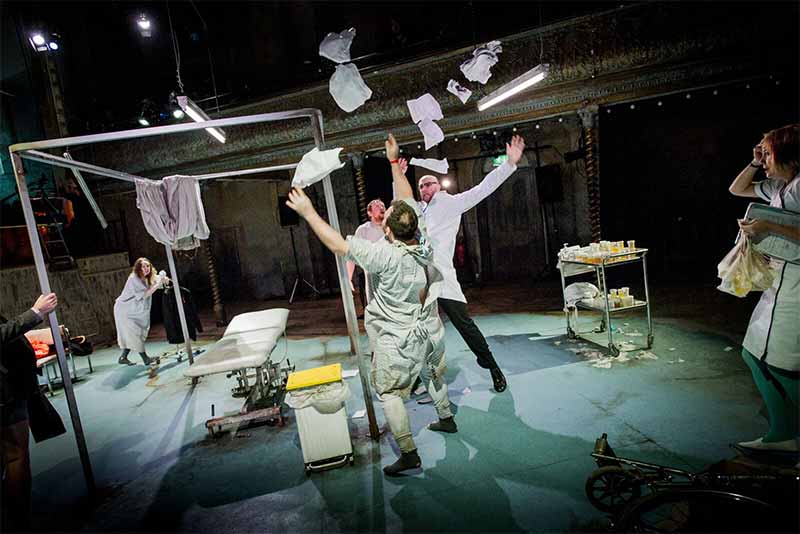 Solomon’s Knot’s first operatic venture is an artistic triumph, and a foray into the unknown at several levels. First, the choice of historic Wilton’s Music Hall as the venue brings to the attention of theatre-goers a location not normally associated with classical music. Its carefully non-refurbished state provides an apt context for L’Ospedale, set in a shabby, financially overstretched hospital.

This is a short opera apparently receiving its modern premiere, and seeing the light of day thanks to the researches of Naomi Matsumoto, who has made a performing edition of a work found in the library of a Venetian grandee. The composer is unknown but circumstantial evidence points to a connection with the Habsburg Court and so Giovanni Felice Sances is one candidate. It is an accomplished piece, alternating musical dialogue, arioso, and ensemble passages, and so its attribution to the period 1640 to 1660 would seem to be right, that is, from the generation after Monteverdi. 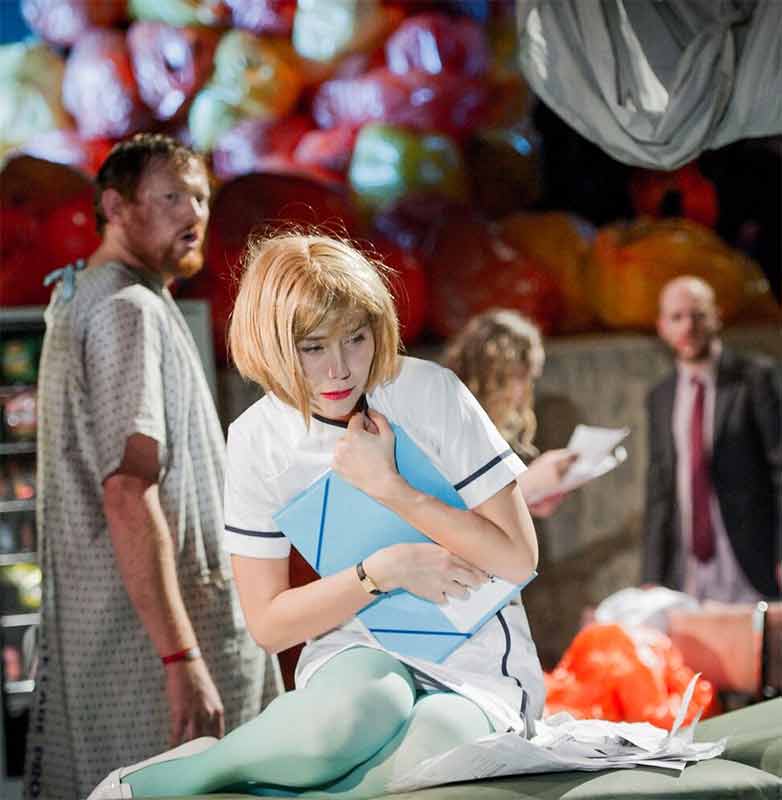 The drama is essentially a comedy of humours (such as Ben Jonson would have recognised) where the hospital of the title is a receptacle for the analysis of four different human conditions personified in the four patients – love-sickness, madness, professional disappointment, and poverty. Without much substantive revision to the text the opera raises pertinent questions about how we treat the ill in medical institutions, the motivations of doctors in treating them (as between philanthropic care and pure financial gain), and the funding of the health service.

With the latest review of public spending (and expected cuts) to come from the Chancellor, George Osborne, shortly, the production offers a timely comment upon the Government’s policies in respect of the NHS. And if anybody should think this is simply bleeding-heart liberal posturing, divorced from the reality of public opinion in which Government policy is being formulated, need only have consulted the Evening Standard’s op-ed on the same day as the press night under review here, in which a certain Anthony Hilton (somebody, one imagines, fortunate enough to have the benefit of private healthcare) argued that the NHS should not be privileged with any ring-fenced funding.

With all that in mind, Solomon’s Knot gave a performance of tremendous enthusiasm and earnestness, playing up the work’s wit and comedy, but leaving the audience in no doubt as to its political message. In that respect it was a pity that Jonathan Sells did not emphasise more of the Doctor’s cynicism and exploitation of his patients’ credulity (shown up only when he fails to provide a quack cure for Povero, the “man with a pain in his wallet”. Despite that, Sells’s singing matched that of his colleagues in terms of musical fluency. Lucy Page was persuasive as the hospital worker Forestiero in forewarning the patients of the Doctor’s shortcomings.

Another apposite modern touch was to make Innamorato’s pangs of love spring from a lesbian passion – I presume that the part was originally written for a castrato, or that the music was taken up an octave in this edition, for a female singer to perform. Rebecca Moon expressed those pining, waning energies of feverish love effectively. Two madrigals by Gesualdo were interspersed (one at the beginning, and another near the end) ratcheting-up the tension with their remarkable harmonic progressions.

From the harpsichord James Halliday led a group of half-a-dozen instrumentalists in a lively and urgent realisation of the accompaniment. Altogether this was a welcome reminder that the major opera houses in London do not monopolise the market in imaginative, innovative productions of musical theatre.