Aladdin
A musical written for television with music & lyrics by Cole Porter to a book by S. J. Perelman [presented in a concert version by Lost Musicals] 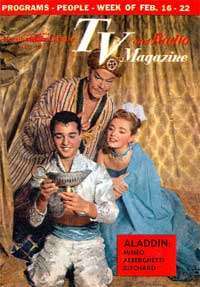 The broadcasting of versions of popular Broadway shows and Hollywood films began in the US during the 1930s. Lux Radio Theatre transmitted versions of The Jazz Singer with Al Jolson, Show Boat with Charles Winninger, and The Wizard of Oz with Judy Garland. Command Performance gave special performances for those serving overseas, including a spoof of the Dick Tracy comic-strip serial, Dick Tracy In B-flat, with Bing Crosby, Bob Hope, Judy Garland, Frank Sinatra, Jimmy Durante, Dinah Shore and The Andrews Sisters. There were abridged versions of Broadway shows such as Lady in the Dark with Gertrude Lawrence and Something for the Boys with Ethel Merman. From the late 1940s The Railroad Hour presented potted versions of musicals and operettas with Gordon MacRae, Dorothy Kirsten and Jane Powell.

Musicals and opera began to appear on US television from 1944. The first original musical written for the medium was The Boys from Boise, with songs by Sam Medoff (famous for his song ‘Gilly Gilly Ossenfeffer Katzenellenbogen by the sea’ in the recording by Max Bygraves). The show was not a great success and TV went back to revivals of established shows. In 1950 and the following year NBC had a series called Musical Comedy Time with versions of Anything Goes, Babes in Toyland and Flying High; and ABC-TV broadcast a one-hour version of Kurt Weill and Maxwell Anderson’s Knickerbocker Holiday with Dennis King, John Raitt and Doretta Morrow. In 1954 Ethel Merman, Frank Sinatra and Bert Lahr did a one-hour version of Cole Porter’s Anything Goes for NBC, and so it went on … A Connecticut Yankee at the Court of King Arthur with Eddie Albert, Janet Blair and Boris Karloff, Our Town with Frank Sinatra and Paul Newman and a version of A Christmas Carol with music by Bernard Herrmann; possibly the most successful show was Jule Styne’s Peter Pan in 1955.

Musicals on American television became a staple part of the programming. It fell to Rodgers & Hammerstein to set the standard in 1957 with Cinderella, starring Julie Andrews. If no great critical success it did appeal to a nationwide audience, a fact that Cole Porter considered when he was commissioned by CBS to write a version of Aladdin. Cole did his homework and researched Chinese market places, the basics of astrology, Chinese names and the geography of ancient Peking. As his book-writer he had S. J. Perelman, the eccentric humorist who had worked on scripts for the Marx Brothers and did the adaptation of Mike Todd’s film of Around the World in Eighty Days. The broadcast was a great success but the show is very sub-Porter and it turned out to be his last musical. 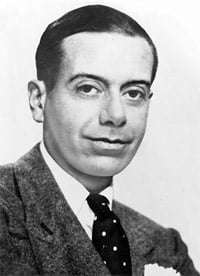 The songs are just about passable; only one really stands out, ‘Come to the supermarket (in old Peking)’. It makes for a good opening number for the Magician. Barbra Streisand picked it up for one of her albums. The Emperor’s song ‘Wouldn’t it be fun (not to be famous)?’ is also a jolly number. The plot follows the usual path with most of the usual suspects although there is no Widow Twankey, just Aladdin’s mother. The Magician pretends to be the long-lost uncle of Aladdin, scheming to get his hands on the magic lamp and away from its rightful owner, Aladdin, the young man who saves the Princess from a fate worse than death. Unfortunately the plot seems to have elements missing and towards the end it is difficult to fathom just what is going on.

The cast list boasts opera singer John Rawnsley as the Astrologer. He makes a good shot of the part. Richard Dempsey is bright-eyed and bushy-tailed as the innocent Aladdin and there’s a hilarious performance by the veteran Vivienne Martin as Aladdin’s Mother. She plays it good and Cockney, rather like Irene Handl might have done. She is aided by her sidekick Wu Fang, the pickpocket, played in cheerfully camp style by Stewart Permutt. Chinese conservatoire trained Candy Ma looks the part of the Princess and sings lovingly in her romantic entreaties to Aladdin. Michael Roberts is brilliant as the Emperor, contriving to appear Chinese with a very majestic walk. As Sui Generis, the evil Magician, John Savident relishes his lines a little too slowly, as if tasting every word. He probably has the best of Perelman’s script. Greg Arrowsmith reconstructed Porter’s score and performs piano accompaniment and sound effects with great élan. Before the show we hear what Cole Porter said on the original broadcast, in the hope that the newest medium was going to have a productive future for original musicals.

Although the score was commercially recorded, a visual document was not made of the broadcast, although a kinescope recording survives. The TV material was later presented by Harold Fielding with Bob Monkhouse, Doretta Morrow, Ian Wallace and Ronald Shiner in a much altered version with a new script by Peter Coke and Denis Goodwin that omitted the Magician but included Widow Twankey plus songs from other Porter shows. The Lost Musicals presentation is therefore the first time the original teleplay and score have been performed since the live broadcast of 21 February 1958.