Words and Music
The first revival of the 1932 show with book, music & lyrics by Noël Coward [semi-staged] 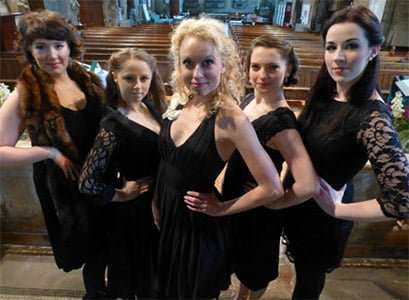 Ian Marshall Fisher started his rewarding project Lost Musicals twenty-four years ago, and has recreated dozens of Broadway shows for the concert stage, musical comedies and revues which have long laid dormant. Noël Coward’s Words and Music is the first (and Fisher declares last) British work that he has chosen, and its inclusion was almost by chance.

In 1938 Words and Music was adapted for Broadway as a revue entitled Set to Music, with Beatrice Lillie (who brought her inimitable style to ‘Mad dogs and Englishmen’). It featured highlights from Words and Music as well as substantial additional material, and the American version is the one Fisher intended to recreate. After considerable research it became evident that not enough of Set to Music could be traced (although enough material has since surfaced to make it a future possibility), but the earlier show remains complete.

Words and Music is different to American revues – inevitably, perhaps, it is less brash and brassy. It has a beguiling charm and, predictably from Coward, plentiful wit and rapturous tunes. Fisher has long been expert at casting his shows, and he has assembled another fine company, including stalwarts Vivienne Martin and James Vaughan, who are responsible for many of the laughs, each of them having a show-stopping solo – Vaughan with ‘Mad dogs’ and Martin with the hilarious ‘Wife of an acrobat’. All of the material is by Coward, so melody is to the fore, with fewer sketches than one might expect, though several effectively mix song and dialogue, notably a pastiche of the play set in the World War One trenches, Journey’s End. An audacious conceit for its time, it concludes with the lines: “All that men sigh for, live, laugh and die for, Love and War.” It is presented as if it were a film directed by Erik Charell (1894-1974), known for his spectacular extravaganzas such as the operetta Congress Dances (1931). 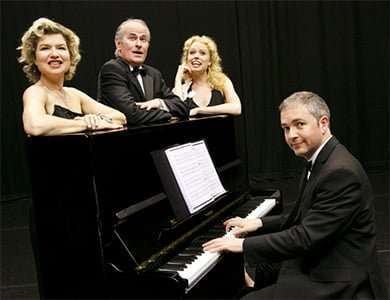 Words and Music opens with an amusing backstage number as the chorus girls harass their dresser (Nicola Keen) and sing of their producer: “For every scene he cuts out, he says ‘Just send the sluts out’.” Several of the numbers familiar outside of the show benefit from framing dialogue, such as the beautiful waltz ‘Let’s say goodbye’. Coward was proud of having written one of the first songs about the transience of physical attraction, and it is given a vibrant poignancy by Holly Dale-Spencer and Craig Berry. Dale-Spencer is also effective as the daughter of an Ealing pawnbroker who is nervously on her way to meet Royalty – “I say to myself each day, in definitely marble halls, today it may be three white feathers, but yesterday it was three brass balls.” Matt Stevens gives her lively support, and is also effective as a chirpy private in the Journey’s End sketch.

For the jaunty ‘Something to do with Spring’, Dale-Spencer and Keen are joined by Dom Hodson, a young talent to watch, and Pamela Miles is splendid as the resourceful mother singing of ‘The younger generation’ who are “knock, knock, knocking at the door.” Another highlight is the durable standard, ‘Mad about the boy’, presented in its original four-part version as the charms of a screen hero are rhapsodised by a society matron (resourceful Issy van Randwyck), a schoolgirl (Laura Coard), a scullery maid (Martin) and a tart (Dale-Spencer). Other outstanding numbers include a nod to the Depression (‘Children of the Ritz’), and an amusing look at freak moments of notoriety (‘Hall of fame’), while others contributing to the first-rate performance level include Marie Hemsley, Lottie Latham and Karen Anne-Kelly.

How refreshing to hear literate lyrics clearly enunciated, and the score is given its melodic due by the skilful direction of Ian Townsend. The show ends with Coward’s wistful song of parting, ‘The party’s over now’, with its wise words, “Life is sweet, but time is fleet beneath the magic of the moon…”. It is a lovely song, and the perfect ending to a delightful experience.