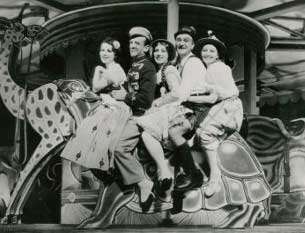 This is the first revue that the Lost Musicals series has presented in its nearly twenty-year history. In its day, 1931, “The Band Wagon” was very important and a great success and starred Fred and Adele Astaire, the brother-and-sister dance-act in their final show together before Adele retired to get married. It also starred Helen Broderick and Frank Morgan, big names even before their Hollywood triumphs, and it had too the celebrated dancer Tilly Losch. The music was by Arthur Schwartz, already something of a Broadway veteran, with lyrics by Howard Dietz who also wrote the sketches with legendary writer and director George S. Kaufman. It made a huge impact on the Broadway theatre and was heralded as being ground-breaking. The staging used two revolving turntables to speed up scene-changes. It was also the first show to eliminate the footlights by suspending floodlights from the balconies, an idea subsequently used by all theatres.

As for content, “The Band Wagon” introduced some songs that were to become classics, including ‘Dancing in the dark’, ‘New Sun in the sky’, ‘High and low’ and ‘I love Luisa’. Some of the songs were used in the 1953 film of “The Band Wagon”, although it bore little resemblance to the revue, apart from some Schwartz & Dietz songs and that Fred Astaire starred in both productions. Where the show comprised songs and sketches, the film had a complete story by Betty Comden, Adolph Green and Alan Jay Lerner about an aging musical star trying to revive his career on Broadway in a play based on the Faust legend. With Astaire were Jack Buchanan, Cyd Charisse, Nanette Fabray and Oscar Levant. It’s a very witty piece with more great Schwartz & Dietz numbers such as ‘By myself’, ‘Shine on your shoes’, ‘That’s entertainment’, ‘You and the night and the music’ and ‘I guess I’ll have to change my plan’. The film has lately been transformed into a stage show, although it has yet to reach Broadway.

The songs are the best thing in the 1931 original and the still-familiar songs, ‘Sweet music’ and ‘High and low’ also stand out, as does the ‘Hoops’ number sung and danced by the Astaires. It has two children in a French park playing with their hoops, here performed by Barnaby Thompson and Clare Rickard. ‘Confession’ sees the incomparable Vivienne Martin (no stranger to revue) singing about never kissing a man before or having a taste for wine, or staying up late, until she confesses the real truth behind these tales. Elisabeth Counsell admits that ‘New York is a nice place to visit’ but confesses she hates living there. James Vaughan and Clare Rickard bemoan life not being what it’s cracked up to be, so they might as well be ‘Miserable with you’. Martin again has a faux-romantic song about an enigmatic lady called ‘Nanette’ – enigmatic because nobody’s ever met her. For ‘White heat’ Barnaby Thompson and Clare Rickard perform a tap-dance in the style of the Astaires. Each half has its own ‘overture’ gallantly played by Jason Carr on the piano and the finale is a reprise of a medley of the show’s main songs.

Most of the songs are still very good but some of the sketches show their age and are far too long. The best are the short, sharp blackout scenes such as ‘Prison cell’, or James Vaughan in his ‘Monologues’ which see him as a cross between Bob Hope and Jack Benny. There are three very long sketches. ‘The Pride of the ‘Claghornes’ is a spoof of a Southern family in which the daughter of the clan is a disgrace because she’s still a virgin. ‘The Great Warburton Mystery’ is a send-up of a detective story in which James Vaughan as a dizzy Clouseau-type policeman, tries to solve a murder with his unorthodox methods. Carr escapes his seat at the piano to play the body in the library. ‘Pour le bain’ is set in a bathroom accessory shop but is so protracted that its point is rather dissipated.

“The Band Wagon” originally ran for 260 performances, a good run. Historically speaking it is of interest and there is much to enjoy in Ian Marshall Fisher’s revival. However, the song-and-sketch show is now a long-gone genre that’s unlikely to ever appear again. Catch it while you can.