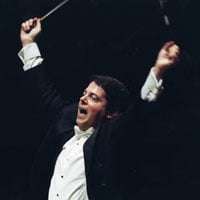 John Tavener is impressed with Nicola Benedetti’s playing and wrote his Violin Concerto, Lalishri, for her. He was also inspired by the example of another female, the poet Lalla Yogishwari whose writings, combining intensity and simplicity, made him reflect on the “innocent intensity” of Benedetti’s playing.

The concerto follows a narrative line tracing the song of Lalla where she dances naked throughout Kashmir on her discovery of God inside herself. The music is in five sections moving through dance, ecstatic trance to a musical expression of Bliss.

Only a composer with such strong beliefs in the mysticism of religion could begin to bring off writing a concerto, which contains these rarefied thoughts that elude most of humanity. The result is one of his most compulsive works and a concerto that could enter the repertoire.

It has moments of great beauty, not least the slow theme so strikingly similar in outline to the middle movement of Bruch’s G minor Concerto, the ubiquitous. But this is in no way a derivative work. Rather it strikes out on its own independent way with little attempt to follow traditional concerto form. The idiom does not advance on Prokofiev, his First Violin Concerto that is, but the treatment of the themes 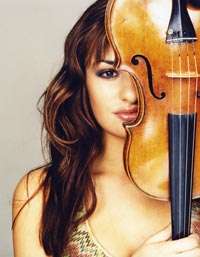 and the logic of their deployment are entirely original to Tavener. Sometimes wistful and mystic, sometimes wild and exhilarating; indeed it was at the time of the latter that poor Benedetti’s string broke resulting in a very unfortunate five-minute break halfway through this 35-minute piece.

This naturally affected the impression of the work and it is good that a DG recording is now available to hear again this striking, individual and often very beautiful new concerto from the newly knighted composer.

The performance represented very much the coming of age of Nicola Benedetti, a soloist whose playing has often been obscured by too much hype. Performing an ambitious premiere is altogether different to playing selected works from the well-worn violin repertoire and Benedetti impressed hugely with her blend of calm control in the quiet moments and the virtuosity required when the music gets going. The concerto is scored for strings alone, using a supplementary string quartet to allow for variety in tone and timbre.

Andrew Litton, who dealt with the unexpected five-minute pause with humour and panache, inspired his orchestral colleagues to good effect.

After new Tavener came familiar Elgar with the Second Symphony, close to all Elgarians’ hearts for its blend of rumbustious bursts and wistful withdrawals. Litton did not provide what might have been expected, Rather his intention was made clear from the very beginning with a sonorous, perhaps portentous, opening which heralded an expansive performance very much in Romantic mode. It contained none of the severity of Brahms, more the warmth and nostalgia of Rachmaninov. This could be viewed as indulgent until memories of Barbirolli’s own expansive view of this work is recalled.

The downside of Litton’s approach was the emphasis put on power and the relative neglect of energy. But it had masses of feeling throughout and was rewarding in its own right.

The orchestra responded to Litton’s approach by producing warmth of tone and distinctive string sonority, no doubt helped by having antiphonal violins. The newly improved acoustic of the Hall was fully on display and the players seemed to relish their ability to squeeze so much emotion out of Elgar. The pleasure of playing in this hall was evident by watching the back desks of the second violins getting tucked into Vaughan Williams’s exhilarating rhythms in The Wasps Overture. Litton drew a fine sense of lyricism from the LPO.

Litton is a very sympathetic Elgarian playing a wide range of his works on his travels. This commitment was rewarded at the end of the concert by the award of the Elgar Society Medal given by the Elgar Society to “foreign-born musicians who have made a significant contribution to the understanding of Elgar’s music particularly abroad”. The award is fully deserved.