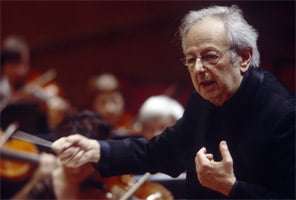 André Previn, such a part of LSO history and of British musical life, received a very warm, with-affection welcome. He may be somewhat frail these days but he remains good-humoured and musically sure-footed. He was here in his element. That said, the Suite from Aaron Copland’s Appalachian Spring (originally for Martha Graham’s dance troupe) – and music for the desert-island – wasn’t without some dodgy moments as well as a couple of false entries, the quicker music tending to caution and inertness. However, the slower passages were yearningly expressive and eloquently searched, but the strident too-fortissimo trumpets and the thumped, dead-sounding timpani notes were imbalanced with the rest of the orchestra (strings were overpowered) and ‘against’ this profoundly poetic, pastoral, score.

Previn’s own Concerto for Violin and Viola (2009) proved a concise less-than 20 minutes’ worth, its two movements being of equal length. This is music of sweet lyricism and heart-warming harmonies, sentiment and nostalgia to the fore, the Korngold/Walton axis prevalent. Without pretension, as well as typical, Previn’s craftsmanship is impeccable, changes of mood seamlessly managed. Whether the ‘Suddenly fast’ episode of the second movement convinces, largely because it is subito and the work is otherwise song-like, is a slight doubt. Numerous orchestral principals are highlighted, particularly oboe, trumpet and flute, with a cello making a ‘string trio’ as the piece fades into the sunset; such opportunities were well-taken. Misgivings must be expressed though about the nominated soloists, particularly Yuri Bashmet, whose inadequate projection, sour sound and dubious notes were niggling throughout; Anne-Sophie Mutter was not without some tonal roughness either. It would be good to hear this attractive score again, next time from protagonists not in at the birth.

John Harbison is one of numerous distinguished American born-in-1938 composers. Others include Joan Tower, John Corigliano, Charles Wuorinen, Frederick Rzewski and William Bolcom – there’s a whole concert series there! Harbison’s Third Symphony (1990) was written for the Baltimore Symphony Orchestra and David Zinman, their premiere performances followed by a European launch from James Levine and the Munich Philharmonic. Searching for a UK premiere reveals nothing! So, at this concert, did the LSO give the first British performance either without knowing it or without informing us?!

Harbison – admirer of Sibelius, Tippett, Nielsen, Stravinsky and William Schuman (all greats) – has composed a tightly organised symphony with his Third, its five sections impressively bound into a 25-minute totality and covering a lot of ground. From the arresting, catchy opening gesture to the exhilarating close (brass having a field day), this is music that holds the ear and also the emotions, whether in a bittersweet solo-viola-led melody, or through railing and consolatory ideas, plaintive woodwinds (with a Rite of Spring-like incantation), sonorous low brass, gawky rhythms, tintinnabulations of wood and metal percussion and tattoos from skin, and intense high-lying violins. There are ‘humoresque’ moments, but essentially this is music of depth and beauty – the ‘Passionate’ fourth section, effectively the slow movement, having an ‘epic’ feel – that is powerful and impressive, and here given a performance to match. What a shame it was not recorded. Another Harbison symphony would be welcome. There are currently six, the latest first-given in Boston just a few weeks ago.

André Previn is not engaged for London during the LSO’s 2012-13 Barbican season, so we must presume that 85th-birthday celebrations (on or around 29 April 2014) are in hand.