This concert, the last in Bernard Haitink’s ninetieth-birthday series with the LSO, might or might not mark a more significant farewell: the conductor does not feature in the orchestra’s published plans for 2019-20. While there were no major musical surprises, the bill of fare replicating that given a week ago here and at Paris’s Philharmonie in the interim, the standing ovation at the close was more than usually heartfelt. 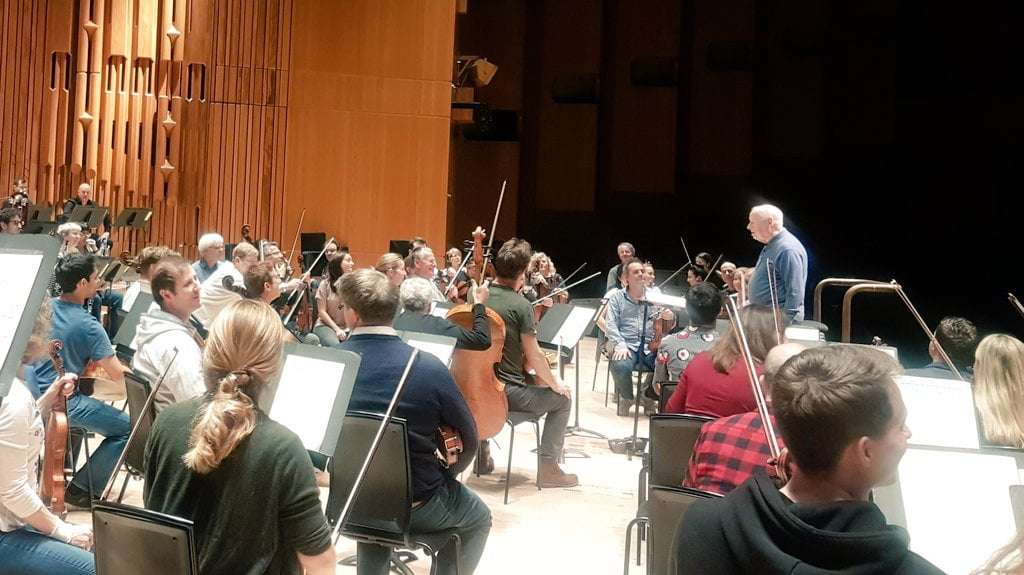 Sceptics may have been puzzled – was not the Dvořák a little muzzled, the first movement of the Mahler in particular a tad stiff-jointed? – but then Haitink has always flattened contrasts others play up, subjecting surface incident to the longer view, encouraging his players to give of their best rather than shaping lines with intrusive nuance. If his Mahler has grown balder and more monolithic over the years (his pioneering LPs from Amsterdam were lighter on their feet), he continues to engender distinctive playing, a mellow, round, full sound only partly compromised on this occasion by the Barbican Hall’s blunt acoustic.

Haitink began as a rank-and-file violinist and has always been sought after as an accompanist, appearing in this role on his first internationally distributed LP not much short of sixty years ago, directing the Concertgebouw for Arthur Grumiaux’s Mendelssohn and Tchaikovsky Violin Concerto coupling. Isabelle Faust is much acclaimed but it’s not always easy to discern a big personality in what she does. That her sound is not large was concealed by the reduced forces clustered on the platform. The encore was the most distinctive, least stodgy part of the show, a spooky sort of lullaby to bring to a birthday party, the ‘Malinconia’ movement from Ysaÿe’s Second Sonata, played sotto voce and muted throughout. It ends with a more overt statement of the fateful ‘Dies irae’! Perhaps the problem was personal: I last heard the LSO play the Dvořák with the almost excessively individualistic Anne-Sophie Mutter whose commanding manner, insistent emoting and headlong furiant Finale could scarcely have been more different. Bar a couple of minor slip-ups Faust was perfectly assured – and rock-solid in those awkward stratospheric bits – but scarcely revelatory. Both conductor and soloist used scores yet seemed perfectly aligned. There were no problems of balance.

Any fears that we were going to be offered a reduced sort of Mahler Four were banished by a major reorganisation during the interval. There were now eight double basses where previously there had been four. The violins were antiphonal. Familiar as he is with the piece – he must surely have directed more performances than anyone else by now – Haitink is not one to abandon the printed page, those customarily lucid gestures now largely delivered from a mainly sedentary position but without loss of focus. It is of course the third movement which responds best to Haitink’s solid (or should that be stolid?) Beethovenian objectivity. This was unarguably glorious. Whereas the Scherzo had only just enough bounce. Despite a great contribution from the acidulous re-tuned alternative violin of guest leader George Tudorache, it was not difficult to imagine a reading of greater bite and irony.

It was the opening movement, purged of Claudio Abbado’s fluctuations of tempo, character and iridescent colour, which may have disappointed some, As throughout Haitink’s consistently darker, weightier sonorities created an autumnal atmosphere of their own. One or two coughers apart, the audience listened with a rapt attentiveness, disrupting relatively few of the exquisitely hushed passages.

Sally Matthews had stepped in at a fairly late stage to provide the clinching child’s-eye view of Heaven, clomping onto the stage during the opening bars of the Finale. She remains a fine singer and used to have the right voice for this music: it’s now far too large and vibrant, the words disappearing into the vibrato. No matter. The respectful silence at the close said a lot and the conductor was able to acknowledge the ovations, rightly singling out the first-horn Katy Woolley, previously associated with the Philharmonia but now off, appropriately enough, to the Concertgebouw. The conductor seemed surprisingly mobile too with his elegant cane. So perhaps we will see him back in 2020-21.