It was cheering to welcome Sir Colin Davis (recently turned 83) back after an enforced summer break. He was hale and genial, conducting with typical vigour and expanse, and also with a smile and a twinkle in the eye, his artless command undimmed.

A moan had seemed in order, for this appeared to be another overture-less concert, but that was before discovering (a slight pun!) that the LSO had added Dorothy Ker’s a gentle infinity to the advertised programme, a timely revival for an impressive piece commissioned by LSO Discovery and first heard at a Workshop a few years back in LSO St Luke’s. (No premiere as such was claimed on this Barbican occasion.) New Zealander, UK-residing Ker (born 1965) includes John Rimmer (in NZ) and then Nicola Lefanu and Harrison Birtwistle among her mentors. The 7-minute a gentle infinity, which here began to the hubbub of latecomers rudely forcing their way into the auditorium, is both atmospheric and deft in Ker’s handling of a large orchestra, subtly dynamic (not least in the use of percussion), edgily communicative, and vibrant in its imagery; a piece full of good things, arguably cut off prematurely. Conducted by Pavel Kotla, the LSO once again suggested that Ker (in attendance) is a composer to watch out for. 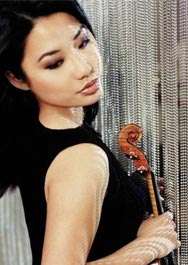 And so to a violin concerto (however adorable and consummate it is) that is now super-ubiquitous in its concert appearances and consequently being hounded to inconsequence. Nevertheless, Sarah Chang (soon nipping off to Detroit for another perennial violin concerto, Max Bruch’s G minor) played it with a big heart, generous from the off if initially lacking poise and with iffy intonation. Nevertheless, her sweet tone was persuasive and her commitment palpable, and she was unafraid to slow the most lyrical passages to almost a standstill, sensitively supported by flutes and clarinets; she made the first-movement cadenza her own. Rachel Gough’s bassoon prepared an eloquent transition into the slow movement, here chaste if just slightly self-conscious but with a haunting sotto voce for the main melody’s return. The finale was a joy, for once not rushed off its feet, whimsical rather than feverish, with some delightful interplay between Chang and the LSO, Davis pointing-up and enjoying the banter.

As for Sir Colin’s conducting of Elgar 2 (music more or less one-hundred years old), it could simply be said that here was a great and glorious performance, and adding that the LSO was devoted in its response. But regrettably, and notwithstanding Davis’s LSO Live version, this often-remarkable account was not recorded, so some commentary seems required for posterity.

From first bar to last, this was an altogether-special traversal, the symphony’s complexities and passions innately opened up. Davis extended the opening bars, making an immediate dramatic statement, coiling the spring before unleashing terrific energy, then easing the music back to its full yearning potential, displaying an entirely convincing flexibility that informed his approach to the whole work and which was always satisfying of Elgar’s potency, rhetoric, wistfulness and regret, the music richly expressive, its intricacy made meaningful, its ebb and flow as natural as breathing, the ‘long line’ left intact.

The second movement (Larghetto) was slow and solemn, but never regimented, relaying deep sadness and some mesmeric moments of stillness and withdrawal (the capacity audience evidently spellbound), yet also hope and nobility – the ‘Eroica’ funeral march re-composed for the end of the Edwardian era – John Anderson’s oboe soliloquy tugging at the heart-strings, and the climax of the movement benefiting from some beautifully timed and affecting portamento as well as powerful but not bludgeoned strokes from timpanist Adrian Bending (whose animated and tonally varied contribution was constantly ear-catching), any tears then blown away by a scherzo that was fully up to its Presto billing, capricious too as Davis sees it, which made the movement’s mid-point bedevilled upheaval all the more disturbing, and with an emphatic slowing (just before the kaleidoscopic coda) that made the most of this moment’s enflamed desire.

So often the last movement – amiable, ceremonial and ultimately tranquil – can seem an anti-climax. Davis judged its momentum, sear and transcendence to a nicety, unified across its whole. If, generally, and for all the vividness, not all details registered (but this seemed to matter not given the musicians’ affinity with Elgar’s writing), then some were heard afresh, not least a cheeky bassoon counterpoint (Gough again) that smirked out just before the finale’s recapitulation that signalled here unforced pomp and then a moving but not mawkish fade to regretful serenity. In short, a deeply absorbing and unforgettable performance rightly greeted by awed silence before applause.