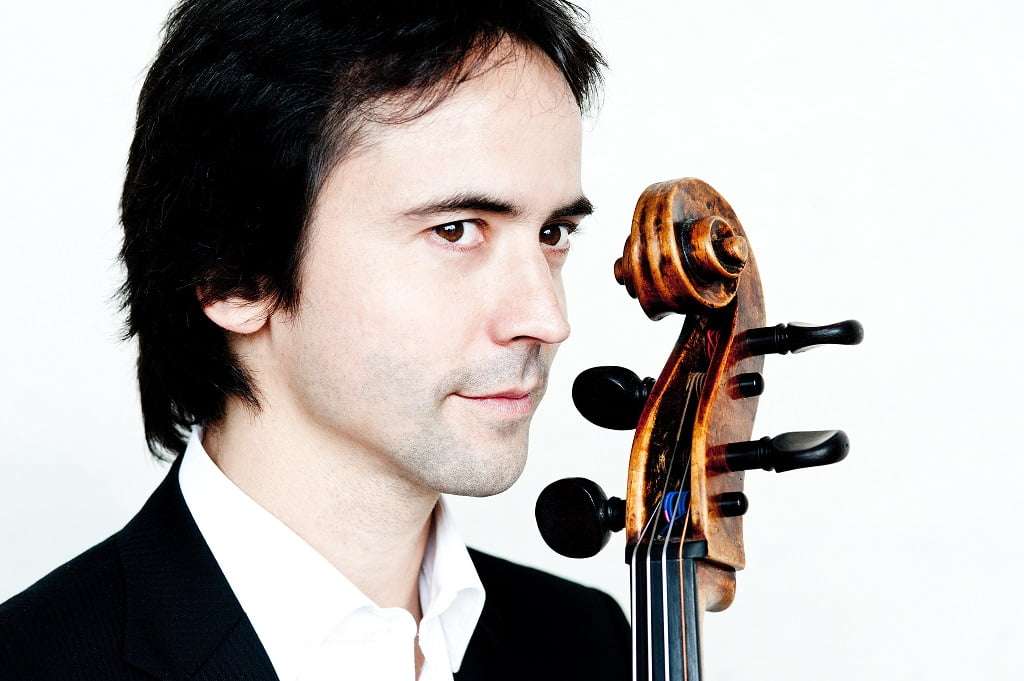 The Dvořák Concerto and French cellist Jean-Guihen Queyras were rightly the London Symphony Orchestra’s advertised attraction of this concert. He’s a charismatic, impeccable artist, a gentleman player, whose facility, musical imagination and intellect make for powerful chemistry. He scaled the heights without fuss, free of posturing emotion, happy to entwine with the woodwinds, exchanging quietly pleased smiles with the leader, Roman Simovic. He painted a broad middle-European canvas, expansive in beauty, each ornament and melodic extension rustling like leaves in an autumn wind. One waited for the big virtuoso moments and was not disappointed: the chromatic octave run into the first movement reprise was aristocratic. In the Finale he projected the refrain robustly, suitably risoluto mezzoforte, but milked the piano return, 15 before figure 8, in a beautifully halting, reflective way, a wistful moment aurally not a little underlined by the glow and patina of his 1696 Gioffredo Cappa instrument.

François-Xavier Roth, winner, the programme book reminded us, of the 2000 Donatella Flick competition and these days joint principal guest conductor of the LSO, supported in style, hands only shaping the phrases poetically, dynamics and hairpins at a premium, building upwards from strong harmonic foundations. Favouring a reduced-size orchestra, somewhere between symphony and chamber, with antiphonal violins, cellos in the middle and basses to the left of stage, he made the most of his pedigree woodwinds (fail in that department and you fail Dvořák), projecting the valedictory, lamenting closing pages of the second and third movements in an ruminatively biographical way (even a muted ‘New World’ echo surfacing during the final minutes). If the orchestral contribution as a whole was not quite in the first league Queyras enjoyed with Jiří Bělohlávek and the Prague Philharmonia in their Harmonia mundi recording released in 2005, maybe it was down to some loose semiquaver articulation in the first movement, and to patches of over-boisterous drumming (Nigel Thomas), veering in places towards country fairground excess. As for the dry, exposing sonics of the performance overall, well the Barbican Hall isn’t the Rudolfinum. Queyras, who’s always had eclectic tastes (his first CD was the Ligeti Concerto with Boulez), surprised with his encore. Not signature Bach, which might well have been expected, but the first of Dutilleux’s Trois strophes sur le nom de Sacher for Rostropovich (the two lower strings tuned to B-flat and F-sharp) – as fine a display of organic shaping, harmonics, techniques, stoppings, quotation (Bartók’s Music for Strings, Percussion and Celesta, lontanissimo) and ppp perdendosi as one could possibly wish for. Masterly.

Orchestrally, inevitably, the poem of the evening was Debussy’s Prélude à l’après-midi d’un faune – exquisitely shaped and placed, perfectly timed and framed, Gareth Davies’s flute rich in Sicilian warmth yet with a touch of Gregalian chill threatening. Nietzsche’s “book for all and none”, Also sprach Zarathustra released the LSO‘s full, crowded strength, the nobility and cadence of Richard Strauss’s opening and rejoinder reaching for epic territory, Thomas’s C and G timpani, piano to fortissimo, coming into their own, in tempo rather than rhetorically fanciful.

Roth, a flautist by training, is a conductor who wants to play every instrument before him. Animated and engaged, he practically leapt into the different sections, hands carving shapes, body now hunched, now toweringly victorieux. In so profoundly prolonging the paused silence at bar 337 – excessively some might say, certainly dramatically, the blaze of preceding C-major a falsehood – he effectively divided the work into two extended volumes of incident. ‘Of Science and Learning’, with its quasi-serial post-Lisztian fugue, the ghostly subject intoned at the start by a desk each of basses and cellos, was especially remarkable in its grey rigour and absence of Romantic dress. There was much to admire in the many highlights of the score, Simovic’s penultimate ‘Dance’ solos projected with a ‘mental’ coolness characterfully remote from the Habsburg glosses and ‘Completion’ pages of Heldenleben a couple of years later. In the tonal conflict of the final bars, the ‘Song of the Night Wanderer’ having tapered away into shadow, the B-major flutes, piccolos and oboes were as loud as always (however brilliant the ‘idea’, the inference, of Strauss’s pp to ppp expectation, it never works in practice, even in the recording studio), contrasting the strings fading to C and the nothingness of an intentionally long-held silence – which the audience, respectfully, did nothing to break.