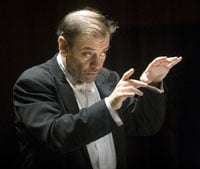 There was some marvellous orchestral playing to be heard throughout this concert – consistently bold and full, if not always observant of quieter dynamic markings.

Stravinsky’s Symphony in Three Movements was given a strong, assertive performance, though the main tempos in the outer movements were on the steady side. In this work – and in contemporaneous others – Stravinsky eschewed written tempo indications, providing just a metronome mark. That for the first movement is ‘crotchet equals 160’, and this performance was nowhere near that (though, to be fair, neither are the composer’s recorded performances) and whilst Stravinsky himself declared that a metronome mark is merely “a guide”, something more impetuous is needed at the start of this great work. The strings’ and piano’s nervy rhythms were not quite insinuating enough and there was a want of onward momentum. The slow movement was beautifully played, though there was a danger of the music sounding too sugary and inappropriately sentimental; but the interplay of wind (flute especially) and harp was ravishing. In the last movement, again, animation was lacking, and whilst climaxes were powerfully delivered, there was a disconcertingly episodic feel to the structure. Intonation and ensemble, however, were impeccable and the orchestra responded to Gergiev’s enigmatic beat with a will. 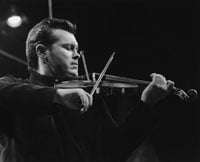 Orchestral support was also unimpeachable in Prokofiev’s First Violin Concerto, whether in the hushed opening or in the virtuoso flights of the scherzo which was the most convincing movement in this performance, Repin dispatching the pyrotechnic demands with consummate ease. Elsewhere, the soloist delivered the lyrical lines in a somewhat cool, detached manner and registered a lack of warmth in Prokofiev’s more expressive passages. 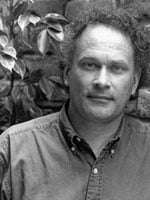 Colin Matthews was commissioned by the Hallé Orchestra to orchestrate Debussy’s 24 piano Préludes. Matthews’s programme note inferred admiration for the composer’s “own orchestral style”. But the three pieces given here do not suggest that Debussy’s piano originals have ‘transferred’ – for want of a better word – totally effectively to the new medium. In fact, the orchestral sonority seemed to be quite heavy in effect – totally the opposite of Debussy’s own scoring. Whilst the performances seemed convincing enough, there seems little purpose to these orchestrations – though the Hispanic ether was convincingly evoked, via very obvious indebtedness to Debussy’s own translucent ‘Ibéria’ (Images pour orchestre).

Although the programme note did not make it explicit, Petrushka was given in its original 1911 scoring – as opposed to the 1947 revision. This afforded a rare opportunity to savour Stravinsky’s first thoughts, with its orchestral palette glittering rather more than it does in its more widely performed successor. Gergiev launched the ballet with a very fast tempo – much quicker than I have heard before – and there was a ferocity that is not entirely appropriate to the good-natured bustle of a busy fairground. This felt very much like a concert performance of a challenging score, and whilst impressive enough, there was a lack of ‘balletic’ feeling. Rhythms needed rather more ‘lift’ than they received here. Various episodes were colourfully evoked, though, finally, one wondered whether the characters of the drama were convincingly brought to life.