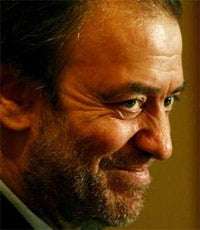 The London Symphony Orchestra’s widely acclaimed Prokofiev cycle four years ago made possible its ongoing relationship with Valery Gergiev, and this concert is an offshoot of the Prokofiev series that this orchestra and conductor are in process of touring worldwide at the present time (including a recent cycle at Edinburgh).

That 2004 cycle had commenced with a notably slipshod account of the ‘Classical’ Symphony (1917), but there were few technical failings in this account. That said, the opening Allegro had a distinctly heavyweight charm, while the Larghetto was a little short on wistfulness and humour. The inflexions of phrasing in the Gavotte were, however, almost entirely successful, and if Gergiev seemed determined to rush the finale off its feet, the LSO was more than equal to the task.

For all his operatic experience, Gergiev is not perhaps thought of as an instrumental accompanist – so the chance to hear him partner two different soloists in two very different Prokofiev concertos was a revealing one. A violinist who is so able a director as Leonidas Kavakos could almost take on both roles in the First Violin Concerto (1917). In the event, this was as enthralling and insightful a performance of this still underrated piece as one might hope for: lyricism and animation brought into potent accord during the often too sectional first movement, the Scherzo a powerhouse of rhythmic vitality, and the teasing withholding of an apotheosis in the finale deftly pointed so the recollection of the first movement’s coda brought an effortless repose. Kavakos has given some fine concerto and recital performances in London over recent seasons, and this can rank with the very best of them.

This evening also provided a rare outing for the Fourth Piano Concerto (1931) – the left-hand work best known for its summary dismissal by commissioner Paul Wittgenstein and not heard in public until three years after the composer’s death. What most likely threw Wittgenstein was not the piano-writing but the unorthodox follow-through of movements. Not that this deterred Alexei Volodin, who dispatched the terse Vivace with élan, then drew an eloquent response from the soulful Andante thatis as fine a movement as Prokofiev wrote during this period. Gergiev might have co-ordinated detail a little more closely in the Moderato – an inscrutable synthesis of scherzo and intermezzo that yields to a final Vivace which is none other than a brief resumé of the opening movement. One that might sound more appropriate at the start of the work rather than its close, though here – as throughout the performance – Volodin’s finesse ensured a sense of continuity that might otherwise be in doubt.

From this to the Original Version of the Fourth Symphony (1930) is only a small step conceptually. It seems generally agreed that in neither this nor its revised (1947, Opus 112) version does this work quite hit the mark. As before, Gergiev approached the clear-cut neo-classicism of the original – recycling as it does music from the ballet The Prodigal Son – as more symphonic suite than symphony per se. After a plaintive introduction, the initial Allegro remained abrupt in transitions to the point of brusqueness, but the Andante – specifically its initial flute theme that ranks among Prokofiev’s finest melodies – had room to breathe, Gergiev being most attentive to the skewed but (as here) persuasive formal trajectory.

This time round, the LSO strings had no problems with the syncopation that permeates the lightly-ironic intermezzo, then the finale combined incisiveness with elegance on its way to a close that was almost too robustly conclusive. Whether or not Gergiev believes that the composer got it more nearly right in revision, he and the LSO certainly made a telling case for the less ambitious yet less inhibited original – in the process bringing this evening of inter-war Prokofiev to a rousing finish.