Possibly as a nod to Benjamin Britten’s friendship with his contemporary Dmitri Shostakovich, this LSO Russian Roots programme included the Peter Grimes Sea Interludes and Passacaglia, and the opening high stillness of ‘Dawn’ set the tone of the whole evening. The generosity and glamour of the LSO sound has lost none of its power to surprise, and there were many instances when one could appreciate the galvanising effect Gianandrea Noseda, the LSO’s Principal Guest Conductor, had on his players. The main point in the Grimes Interludes was the way Noseda moulded them into something like a Peter Grimes symphony, the four descriptive pieces subsumed into the Passacaglia, which in a performance of this weight, distilled the whole drama. Noseda also ensured that the opera’s menace and cruelty made their presence felt as he and the LSO steered the music away from painterly impressionism to something more edgy and uncompromising. There was some lovely playing – the trumpet and xylophone passage in ‘Moonlight’ that gleamed as it decayed, the bravura of the Passacaglia’s ground bass theme as it roamed through the orchestra, and the bleak viola solo that summed up the spirit of the opera. 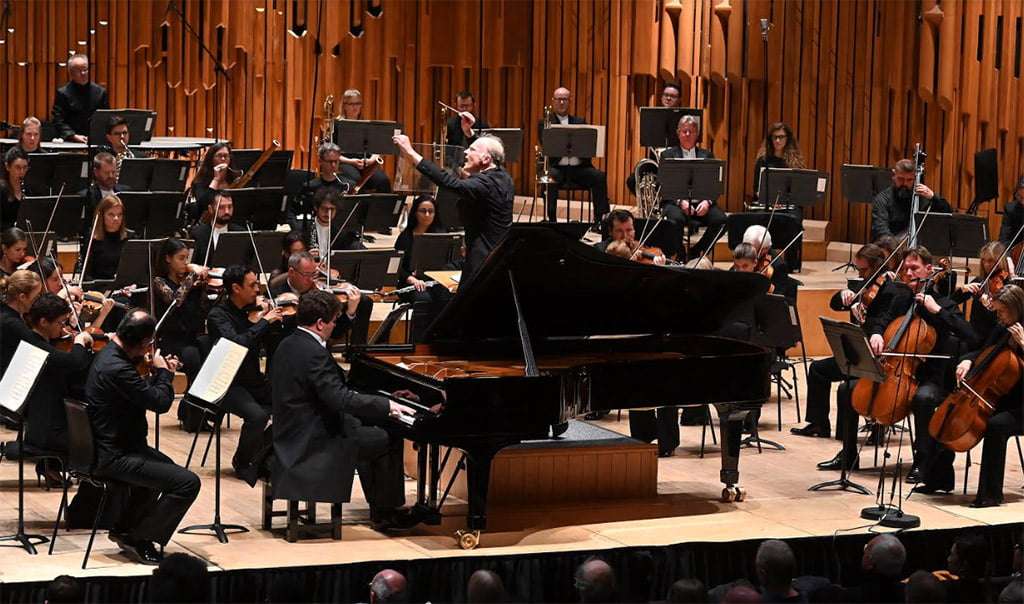 One of the many names of the Beast should be Sergei Prokofiev’s Piano Concerto No. 2, a no-holds-barred celebration of virtuosity that the Russian barn-stormer Denis Matsuev has made his own. Confronted with this degree of alpha-male swagger, technique and stamina, resistance was futile. It was easy to goggle, visually as much as aurally, at Matsuev’s mastery, yet, compared with his blockbuster performance earlier this year, this one had a dark, Russian grandeur – the Concerto’s opening slip in G minor lyricism kept you guessing about his approach, and he then went on to build the massive first movement into a cataclysmic statement of power in the cadenza, unequivocally the destination of the music so far. He was positively possessed in the Soviet brutality of the Intermezzo, about as far as you can get from the Brahms concept of the title, and there was an unmistakable whiff of detumescent tristesse in the relaxation after the finale’s cadenza. Admiration of his ultra-clean pedalling and apparent laconic ease aside, it was also gripping to observe the Matsuev hands at work – the ergonomic efficiency of technique, the economy of means behind the big sounds, and his keeping a lid on flamboyance until the very end when the glissandos dragged him to his feet into Noseda’s embrace – rehearsed or spontaneous, he did the same in the earlier performance – which released a rock-concert-style roar of approval from the audience. For his encore, he played Lyadov’s Music Box (a valse badinage), adding his own rallentando as the clockwork ran down.

It is a strange coincidence that Beethoven, Bruckner, Mahler, Sibelius and Vaughan Williams (probably others as well) wrote sixth symphonies that all in some way stand alone in their outputs. Shostakovich’s short Sixth is also in that area, a proposed paean to Lenin to stand beside the heroic scope of the Fifth and the Leningrad, which ended up just with an opening slow movement that dwarfs the other two, to the consternation of the authorities. Noseda, who was recording this symphony for LSO Live, had a sure hand on the Largo’s minimalist material that sails close to a lack of purpose – trills that hover between structure and effect, long, unwinding triplet accompaniments, desolate wind solos – and on the way it anticipates Shostakovich’s later symphonies. The LSO sound that had worked so well for the Britten and Prokofiev was, for my taste, too saturated and robust – the solo wind work needs a more spectral pallor from the strings to make its point – and the finale, which refers not so obliquely to Rossini’s William Tell, set up the divisive extremes that were to become such a bewildering aspect of Shostakovich’s later music.